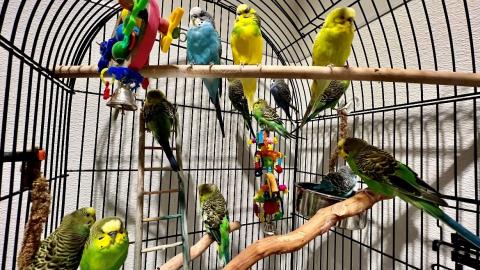 A group of about 30 parakeets that were found abandoned in a trail in Laguna Niguel last week have all been adopted after an outpour of support from a community.

A local resident first found the parakeets and reported it to the Mission Viejo Animal Service Centers, saying the birds were “not wild, could not fly and must have been abandoned.”

Lavison says the center received over 25 adoption applications from people who were interested in taking home two or more birds.

“I had two parakeets growing up and enjoyed watching, holding, and listening to them,” Lavison said. “They take a little bit of maintenance to keep them clean and fed but are generally an easy pet.”

The center’s nonprofit, Dedicated Animal Welfare Group (DAWG), agreed to a buy one get one free promotion where the nonprofit would pay the adoption fee for the second parakeet for each family who adopted one.

The last of the 30 birds were adopted on Wednesday after a total of 15 families took home at least one parakeet.

“The last of the birds left our facility Wednesday when the Aguilar family of Mission Viejo adopted their pair. We would like to sincerely thank the community and all of the adopters for the heart-warming show of concern over these beautiful birds,” Lavison said.