LA Kings pull further away from Vegas with win over Ducks 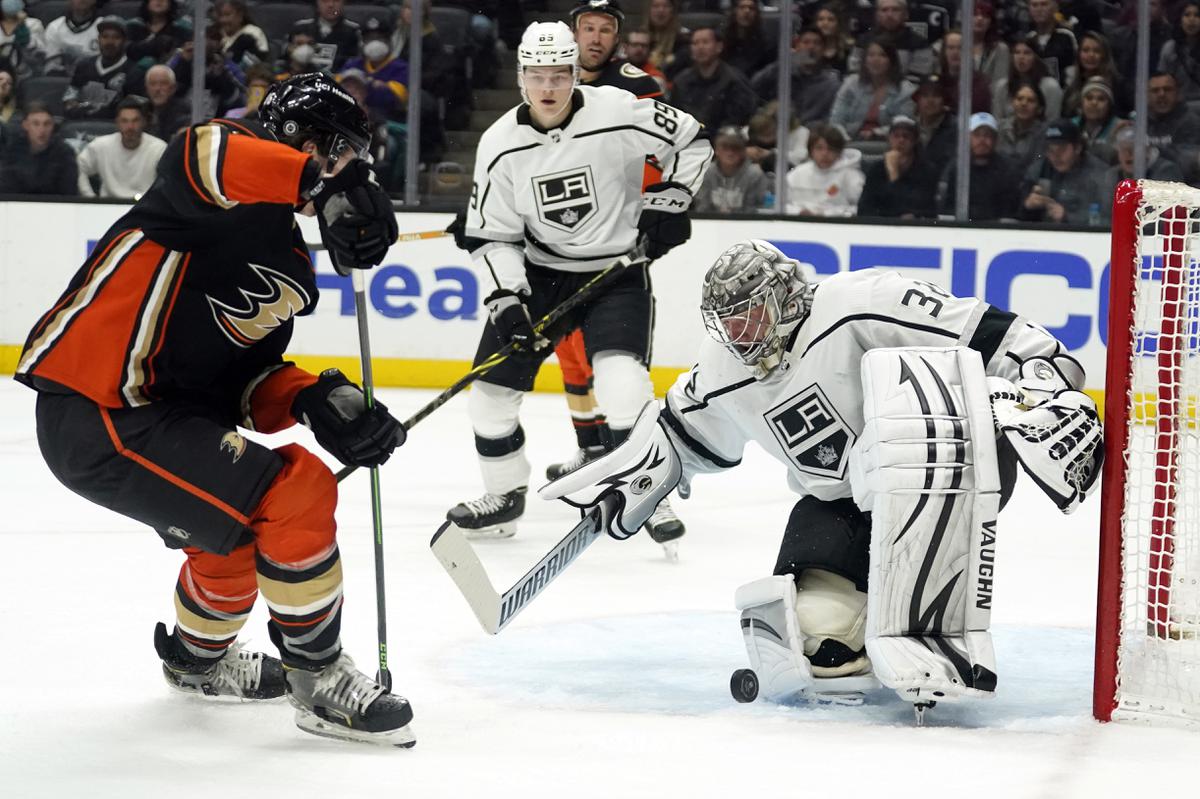 Los Angeles Kings goaltender Jonathan Quick, right, stops a shot during the second period of an NHL hockey game against the Anaheim Ducks on Tuesday, April 19, 2022, in Anaheim, Calif.

ANAHEIM, Calif. — Phillip Danault scored the tiebreaking goal early in the third period, and the Los Angeles Kings solidified their grasp on a playoff spot with a 2-1 victory over the Anaheim Ducks on Tuesday night.

Jonathan Quick made 29 saves in a frequently spectacular performance, and Adrian Kempe scored the first goal in the Kings’ third victory in four games. Los Angeles is closing in on the end of its three-season playoff drought, moving five points clear of Vegas and Vancouver for third place in the Pacific Division.

“If we expect to play a couple of weeks from now, we have to be comfortable (in this type of game),” Quick said. “Especially this time of year, these games are more frequent. … It’s fun. Unfortunately it’s been a few years, but we’re trying to enjoy it and take advantage of the opportunity out there.”

The Kings still had trouble shaking the Ducks in the third Freeway Faceoff of the season, and Quick had to make 16 saves in his outstanding second period to keep the score even.

“Looks like he’s been here before,” Los Angeles coach Todd McLellan said of his two-time Stanley Cup-winning goalie. “He made huge saves, obviously a lot of them on the penalty kill. Made them when he needed to settle us down. He feels real good in net right now, and we feel real good with him in net.”

Los Angeles then went ahead 32 seconds into the third when Danault put his shot over a sprawled John Gibson into an open net.

The goal was initially waved off because Viktor Arvidsson made contact with Gibson’s right pad after Gibson stopped Arvidsson’s shot, but video review reversed the call, giving Danault his 25th goal of the season.

Quick had to make a handful of impressive saves in the third as well, including a robbery of Ducks All-Star forward Troy Terry. The 36-year-old former Conn Smythe Trophy-winning goalie continued his impressive play during his revitalized season in Los Angeles’ net.

Quick’s victory was his 20th of the season, giving him nine NHL seasons with 20 wins — more than all but three U.S.-born goalies in league history.

The Golden Knights and the Canucks have a game in hand on Los Angeles, but Vancouver is the toughest opponent remaining on the Kings’ schedule. The Kings also pulled two points behind Edmonton for second place in the Pacific, although the Oilers have two games in hand.

Adam Henrique scored a power-play goal and Gibson stopped 26 shots for the Ducks, who will miss the playoffs in four consecutive seasons for the first time in franchise history. Anaheim has lost 17 of 20.

After a scoreless first period, Kempe put the Kings ahead early in the second with a snap shot on a loose puck off a faceoff. Kempe’s 34 goals are tied for the second-most by a Los Angeles player in the past 15 seasons, surpassed only by captain Anze Kopitar’s 35 goals in 2017-18.

Five minutes later, Troy Terry fed Henrique for his 18th goal on a slick backhand. Anaheim had several golden scoring chances while controlling most of the rest of the period, but Quick was unbending.

“When I think of the Kings-Ducks rivalry, I think of Gibson and Quick,” Anaheim coach Dallas Eakins said. “I thought they were both going at it. It was very reminiscent of battles of the past. I thought Quick was very good, and Gibby was right there matching him.”