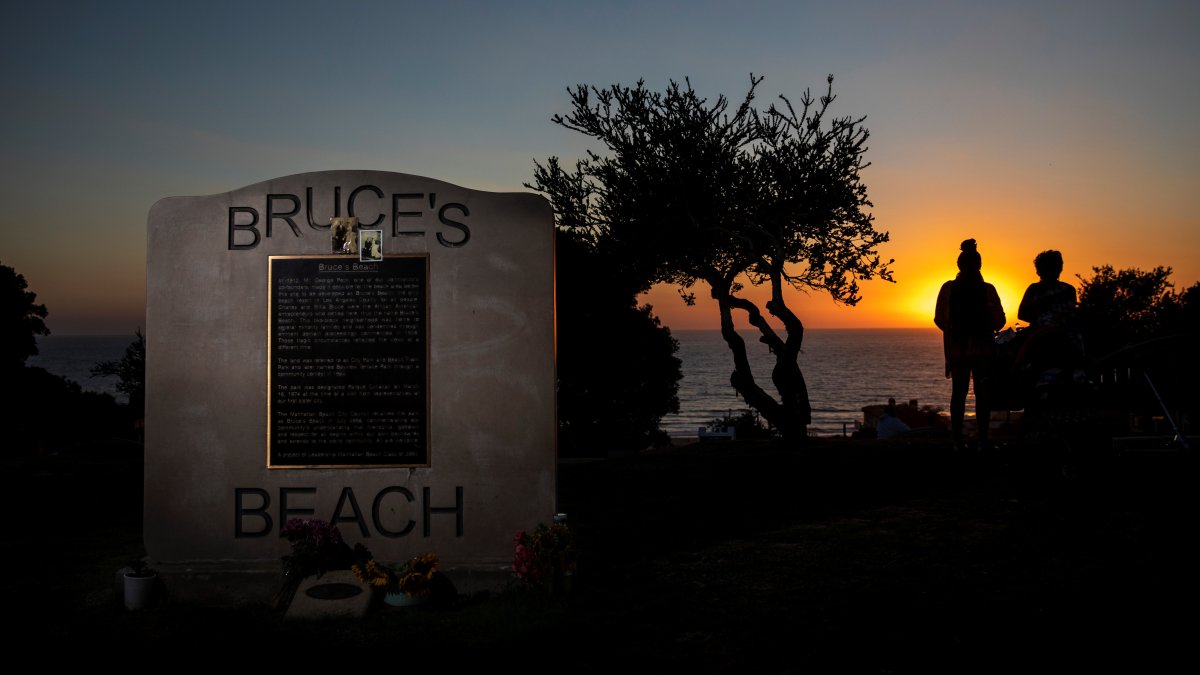 A plan to return ownership of prime Southern California beachfront property to descendants of a Black couple who turned it into a resort, but were stripped of the land in the 1920s, was approved Tuesday by Los Angeles County officials.

The motion, approved by a 5-0 vote of the Los Angeles County Board of Supervisors, allows for the return of the site on Highland Avenue near 26th Street once known as Bruce’s Beach in the city of Manhattan Beach, where the county’s lifeguard training headquarters is now located.

“We cannot change the past, and we will never be able to make up for the injustice that was done to Willa and Charles Bruce,” Supervisor Janice Hahn said. “This may be the first land return of its kind, but it cannot be the last.”

The land was purchased in 1912 by Willa and Charles Bruce for $1,225. The entrepreneurial couple added other parcels and built the first West Coast resort for Black people at a time when many beaches were segregated.

The property featured a bath house, dance hall and café, but soon became a target of vandals, racial harassment from neighbors attacks on vehicles of Black visitors and the Ku Klux Klan, which tried to burn it down.

But the Bruces were not deterred.

They continued operating the resort until the late 1920s when the Manhattan Beach City Council took the land through eminent domain under the pretense of building a city park. The city did nothing with the property, and it was transferred to the state of California in 1948.

“It is well documented that they were driven by racism,” Hahn said at Tuesday’s board of supervisors meeting.

In 1995, the state transferred it to the county, with restrictions on further transfers.

Supervisor Hahn launched the complex process of returning the property to heirs of the Bruces in April 2021. A major hurdle was overcome when the state Legislature passed a bill removing the restriction on transfer of the property.

Los Angeles County supervisors revealed financial details of the plan last week. The deal includes an agreement for the property to be leased back to the county for 24 months, with an annual rent of $413,000 plus all operation and maintenance costs, and the county’s right to purchase the land for up to $20 million.

According to the motion, the county last month completed the process of confirming that Marcus and Derrick Bruce, the great-grandsons of Charles and Willa Bruce, are their legal heirs. They have formed a limited liability company to hold the property.

Charles and Willa Bruce could’ve only dreamed of the day their siezed beachfront property in Manhattan Beach would be returned to their family. And nearly 100 years later, that day has come. Jonathan Gonzalez reports for the NBC4 News at 4 p.m. on June 23, 2022.

“At long last, the descendants of Willa and Charles Bruce will be able to begin rebuilding the wealth that has been denied to generations of Bruces since their property was seized nearly a century ago,” Hahn said in a statement. “We will never be able to rectify the injustice that was inflicted upon the Bruce family, but this is a start, and it is the right thing to do.”

Supervisor Holly J. Mitchell, the motion’s co-author, said the land should never have been taken from the Bruces.

“We aren’t giving property to anyone, we are returning property,” Mitchell said Tuesday. “Property that was erroneously and, based on fear and hate, taken from them.”