Kyiv says at least 20 dead in strike on Odessa 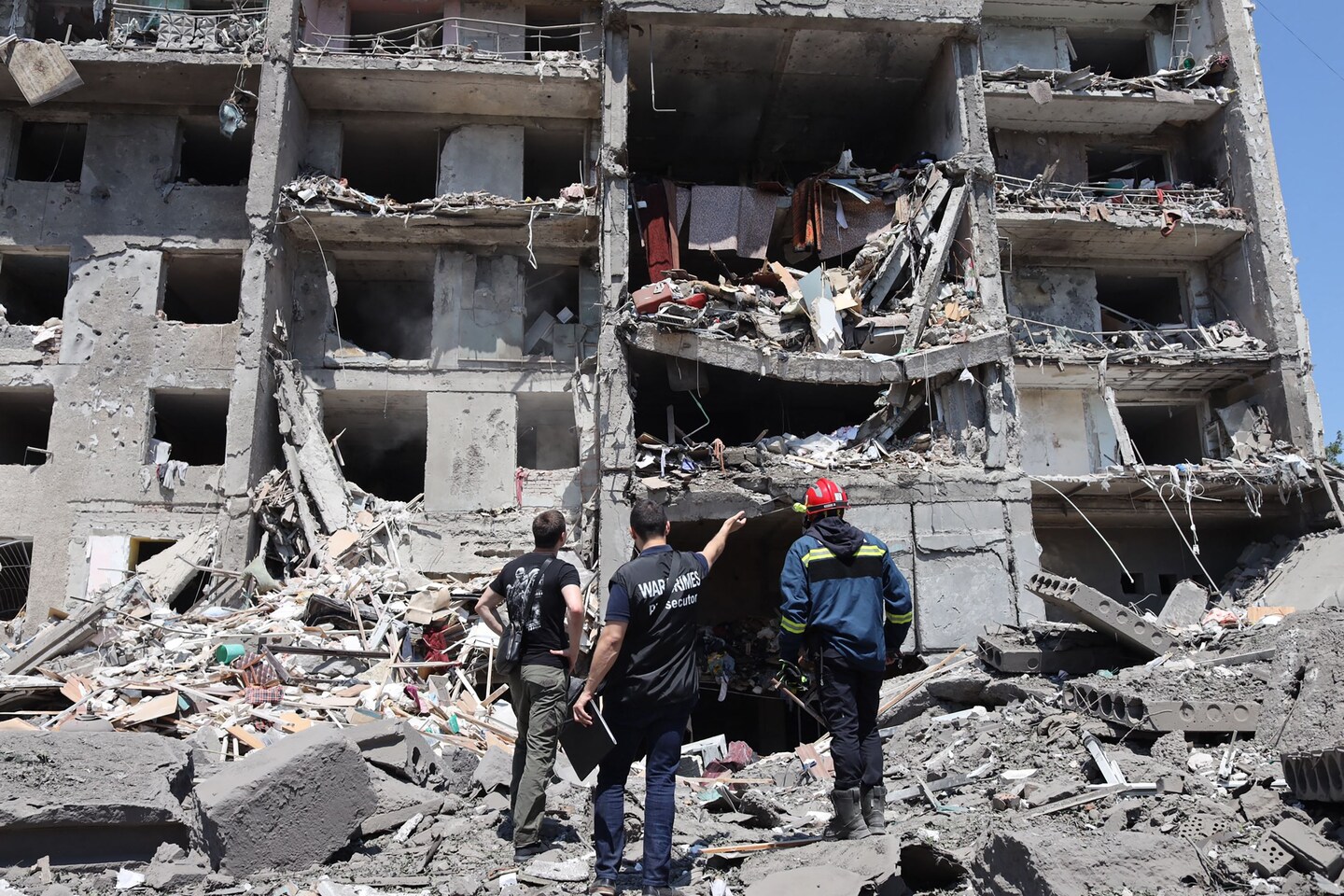 At least 21 were killed and 38 injured in a Russian missile attack on an apartment block and recreation center in a resort town southwest of Odessa, local authorities said on Friday, the largest such toll in a single attack on the region since the war began.

Ukrainian officials said that Russian forces launched the missiles from three aircraft in a predawn raid on Serhiivka, about 30 miles from the port city of Odessa. One child was among those killed, while a further six were injured, said Serhii Bratchuk, a spokesman for the regional administration.

Photos and videos taken following the attack show rescue workers sifting through the remains of the shattered nine-story apartment building, which was stripped down to its concrete structure with debris, glass and personal belongings piled across its balconies.

It comes a day after Russian troops withdrew from Snake Island, a highly contested parcel of land in the Black Sea that was captured by Russian forces early in the war and used as a base for attacks on the country’s south. The Kremlin said the withdrawal was a “gesture of goodwill,” a term it has used for previous battlefield retreats.

The island’s recapture was a strategic victory for the Ukrainian forces, sparking hope that it would reduce the number of assaults on nearby cities. However officials on Friday characterized the attack on Serhiivka as revenge for the island’s loss.

“Terror is a common tactic of Russia,” said Kyrylo Tymoshenko, an adviser to Ukrainian President Volodymyr Zelensky. “First, they cover their criminal actions with an ‘act of goodwill’ and then launch rocket attacks on our peaceful cities.”

The strike was the latest in a series of fatal bombardments by Russian forces on civilian infrastructure, including attacks on a theater and hospital in Mariupol as well a train station attack in Kramatorsk that killed 59.

Russian ground forces have not been able to reach Odessa, and the immediate region has so far been spared from the brutal assaults experienced by cities in the country’s east where Moscow is now focusing its offensive.

Zelensky was quick to condemn the attack, accusing Russia of using unnecessarily powerful missiles in the strike.

“These missiles, Kh-22, were designed to destroy aircraft carriers and other large warships, and the Russian army used them against an ordinary nine-story building with ordinary civilian people,” he said.

Kremlin spokesman Dmitry Peskov said Russia was not attacking civilian areas in Ukraine, and said its airstrikes were focused on buildings used to store ammunition and train troops. There is no evidence, however, that the buildings targeted in Serhiivka were used by the military.

A senior U.S. defense official said on Friday that Russia showed a pattern of using powerful weaponry in a “reckless fashion.” The official said Russian forces used an anti-ship missile during a strike on a shopping center in central Ukraine’s Kremenchuk on Monday that killed at least 18 people.

The U.S. on Friday detailed elements of the $820 million in fresh security and weapons aid for Ukraine that President Biden announced a day earlier at the close of a NATO summit in Madrid. The latest tranche will focus on equipment needed to counter the grinding artillery offensive in the east, where Russia is slowly gaining ground. It will include 150,000 rounds of artillery rounds for use in Western-designed Howitzers that were sent to Ukraine in earlier shipments.

The majority of the fresh stock will be procured from defense contractors, rather than existing U.S. military supply, the Pentagon said, meaning it could take much longer to reach the battlefield. A senior defense official said the procurements could take “weeks” or “months” compared to drawing from existing stocks which can be done in a matter of days.

Survivors of the attack in Serhiivka were pictured Friday sifting through the remains of their shattered homes as rescue workers retrieved the dead and injured and war crimes prosecutors took notes.

“There are people [there]. They are carrying out bodies,” one man said in a video posted to Telegram that was filmed from a neighboring apartment building and verified by The Washington Post. “And an awful lot of dead. Everything was blown apart,” he said. The video showed shattered glass strewn across the floor of his apartment following the blast.

A quarter mile away at the recreation facilities struck in the attack, images showed a pile of debris and mangled railings strewn across the ground among the ruins of the building’s bright pink facade. A mountain of debris covered what had previously been a large swimming pool.

The Moldovan Minister of Health, Ala Nemerenco, said the Moldovan health ministry owned a children’s rehabilitation center that was hit in the attack, killing one and injuring five, all of whom lived in the building. Children were not staying at the center at the time, which was undergoing preparations to reopen following the pandemic, she said.

“Those peaceful people made the days of Moldovan children more beautiful. … From the bottom of our hearts we wish them a full recovery. To the family of the deceased colleague, we express our deepest condolences,” Nemerenco said in a statement posted on Facebook. It’s not clear whether the rehabilitation center was part of the recreational facility and The Washington Post was unable to verify Nemerenco’s description of the facility.

Intense fighting in Ukraine’s eastern region continued on Friday as Russian forces attempt to encircle the city of Lysychansk, one of the last cities standing between complete Russian control of the eastern Luhansk region.

Luhansk governor Serhiy Haidai said on Friday that the Russians had seized parts of an oil refinery in the city overnight, while Russia’s Defense Ministry said that its troops had seized the entire facility. Around 15,000 civilians remain in Lysychansk.

In a courtroom in the Moscow suburbs on Friday, a Russian prosecutor accused WNBA star Brittney Griner of transporting a “significant amount” of cannabis oil, according to Russian media reports on her trial, where she faces 10 years in prison if convicted.

Griner, seated in a cage in the courtroom with a bottle of water and a bag of cookies, said she understood the charges. She did not enter a plea. The court adjourned until July 7 to hear more evidence from witnesses.

U.S. Chargé d’Affaires Elizabeth Rood and other U.S. diplomats attended Friday’s hearing. “We care deeply about this case and about Ms. Griner’s welfare, as do so many Americans, and as we do with all U.S. citizen prisoners overseas. We were able to speak to Ms. Griner in the courtroom today. She is doing as well as can be expected in these difficult circumstances,” Rood said in an emailed statement, adding, “The Russian Federation has wrongfully detained Brittney Griner.”

Andrew Jeong in Seoul, Robyn Dixon and Mary Ilyushina in Riga, and Amar Nadhir, Karina Tsui and Meg Kelly in Washington contributed to this report.