Kremlin orders police to crack down on anti-Putin protests 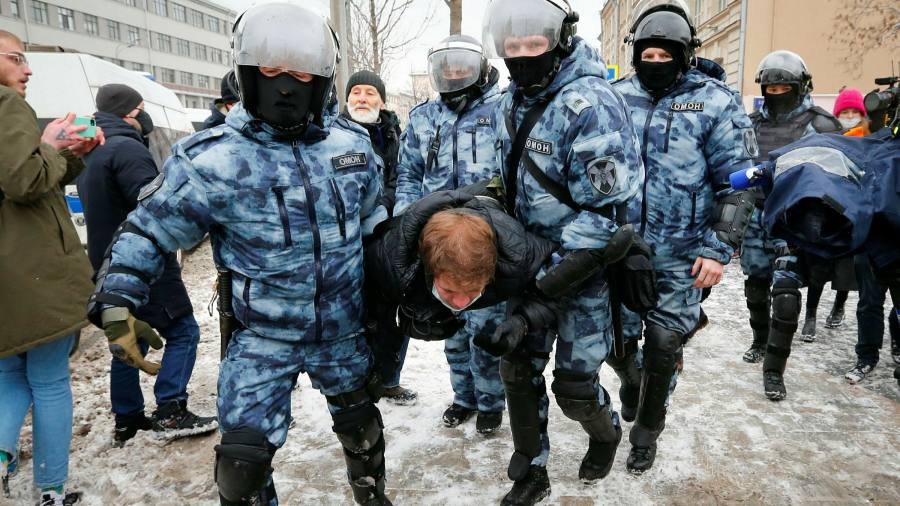 Tens of thousands of people in dozens of cities across Russia defied a heavy police presence to protest on Sunday in support of jailed opposition activist Alexei Navalny for the second straight week.

The Kremlin made unprecedented efforts to stop the protesters repeating their triumph of last Saturday — the biggest rallies against President Vladimir Putin in years — when protesters threw snowballs at riot police, shut down traffic and fought off attempts to arrest them.

A huge effort to close off the historical centre of Moscow, shutting metro stations and fencing off kilometres of pavement with metal barricades guarded by squads of riot police appeared to have tempered the enthusiasm of supporters and significantly reduced the numbers of those willing to attend on Sunday.

At least 650 people were detained in 66 cities, according to independent monitor OVD-Info.

Some refused to be bowed. “What are they going to do, arrest every single one of us?” Vladimir, a chemicals engineer in Moscow, told the Financial Times as he walked towards the police cordon where officers were allowing people to enter but not leave. “We have to show our support”.

The Kremlin is scrambling to respond to the wave of popular anger Mr Navalny tapped with a recent viral video alleging oligarchs spent billions on a lavish palace for Mr Putin on the Black Sea coast. After the film racked up more than 100m views on YouTube, Mr Putin denied he owned the property and likened Mr Navalny to a “terrorist” for organising the rallies.

Pro-Kremlin media was then allowed to film renovations at the palace and a rare interview with Mr Putin’s childhood judo sparring partner, billionaire Arkady Rotenberg, who said he was the owner of the building and intended to turn it into a luxury hotel.

In the Russian capital on Sunday, Mr Navalny’s supporters moved the location of the protest minutes before it was set to begin outside the headquarters of the FSB, the security agency Mr Navalny claims poisoned him with a nerve agent last summer.

Within 30 minutes, riot police in light green military fatigues and black helmets and visors with no clear identification badges had encircled the small park where protesters had reassembled.

As a police megaphone blared a message on repeat, warning people that they were breaking coronavirus rules and would be prosecuted, squads of police began to snatch up protesters one by one and drag them to grey police vans lined up along the road.

“They will probably arrest us but I’m not afraid — Navalny is already in jail, so why should we be scared?” said Alina, a housewife who attended with her husband Evgeniy. “The police are out in force this time.”

The Kremlin’s persecution of Mr Navalny — who was jailed upon returning to Russia this week after several months he spent recovering from the poisoning in Germany — has struck a nerve with Russians across the country upset with a stagnant economy, police brutality, corruption and official impunity.

Protesters rallied in cities and small towns thousands of miles from Moscow and without any history of activism or significant interest in Mr Navalny’s anti-corruption agenda. The largest protests outside Moscow and St Petersburg were in Ekaterinburg in the Urals, where local media estimated 7,000 rallied, and Novosibirsk in Siberia, where Mr Navalny’s staff said 10,000 people attended.

In Vladivostok on the Pacific coast, protesters chanted “My Russia sits in prison!” after they were chased on to the ice over the frozen Amur Bay. A few hundred protesters gathered in Yakutsk, the world’s coldest city, for a second week despite temperatures of -43C.

The shutdowns appeared to be aimed at preventing Mr Navalny’s supporters from demonstrating strength in numbers. In the Siberian city of Krasnoyarsk, a small crowd of about 100 protesters was outnumbered by a phalanx of riot police that surrounded them on all sides.

Investigators have filed several criminal charges against Mr Navalny’s supporters for alleged offences ranging from violating pandemic-related health guidelines to assaulting police officers and “inciting” underage children to protest. A court sentenced Mr Navalny’s brother Oleg and several of his top aides to two months of house arrest on Friday, while others were jailed in advance of the protests or charged after the fact.

Police also attempted to stop journalists from covering the protests, warning in advance they would also face charges. On Saturday, police in Moscow arrested Sergei Smirnov, editor of the independent news site Mediazona, as he was out with his five-year-old son. He was released amid public outcry, ahead of a court hearing.

her running for her, I can’t 😹 #prank #shorts

Gifts for Scorpios: 18 Ideas for the Enigmatic Scorpio in Your Life