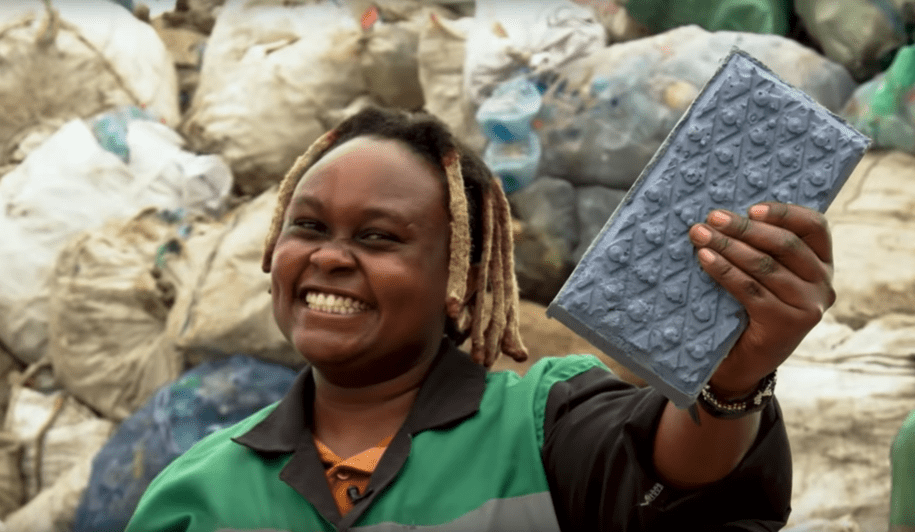 According to Matee, just in Nairobi alone—which is Kenya’s largest city with a little less than five million residents—there are 500 metric tons of plastic waste generated every day. Matee’s business is small. Using three machines, her team sifts, mixes, and compresses the sand of plastic waste into pavers at very high heat. As Matee explains, big businesses need to pay to have their plastic waste recycled and Gjenge Makers takes that problem out of their hands—something those companies are very happy to give up. Gjenge Makers has recycled about 20 metric tons of plastic into reuse since 2017, with a goal of recycling upwards of 50 metric tons this coming year. This is a small fraction of what could be done, but it is a new company with a solid idea.

According to UNEP, Matee majored in material science and worked in the Kenyan oil industry as an engineer for many years. The inspiration for her business came from seeing plastic bags lying about Nairobi streets in her every day life. It took her a year of sinking her savings into research and development of how she could produce the building materials she desired before she made headway. Using early samples of her pavers, Matee was able to win a scholarship in the United States for new entrepreneurs, allowing her to use “material labs in the University of Colorado Boulder to further test and refine the ratios of sand to plastic.” This experience allowed her to not only refine the product itself but figure out ways she could produce a higher quantity of pavers. After three years and burning through her entire savings, she was able to produce her first batch.

So far Matee’s business provides pavers for footpaths, streets, and schools, but she hopes that with time her company can produce even more, less expensive building products. According to Reuters, the plastics Matee can use in her bricks include “high density polyethylene, used in milk and shampoo bottles; low density polyethylene, often used for bags for cereals or sandwiches; and polypropylene, used for ropes, flip-top lids and buckets.” She does not work with polyethylene terephthalate, the plastic frequently found in bottled water.

Matee’s profile on United Nations Environment Program says that Matee also pays individuals in the community for collecting and providing plastics for Gjenge Makers to use. “We have financially empowered over 112 individuals the majority of whom are women and youth groups who are our partners in supplying the waste plastic and the pre-processing stage of our production process.”

The UNEP award will give her company an infusion of money as well as a mentorship program, publicity, and connections with a larger international community of potential investors and partners.

‘The Mountain’ Shows Off Insane Body Transformation Ahead Of Boxing Match

Bam Margera’s Wife Files for Custody of Son, But Not Divorce