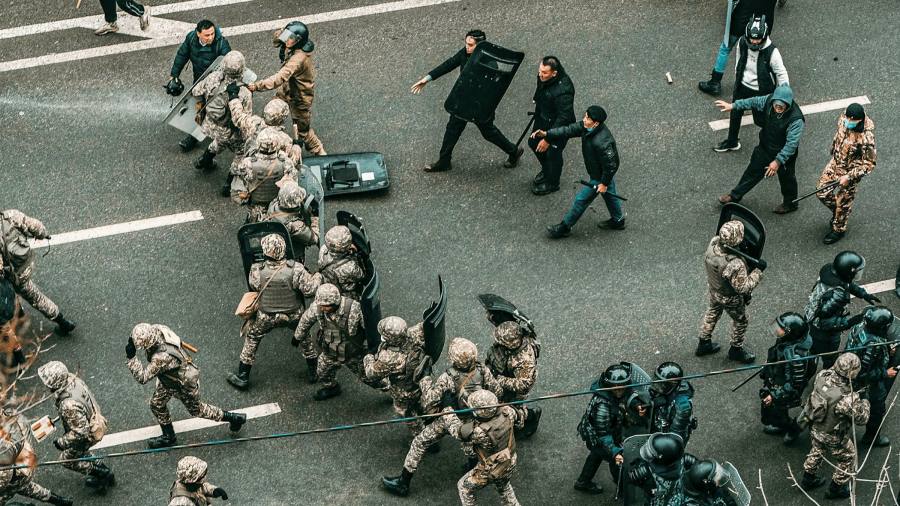 Kazakhstan’s president has called the protesters “terrorists”. Russia’s president Vladimir Putin has labelled them “external forces” bent on “revolution”. Some believe the unrest in the central Asian republic is a power struggle among domestic elites.

What is undisputed about the Kazakhstan protests, which have left 164 people dead and led to nearly 8,000 arrests, is that they began a week ago in a remote city with just a few hundred demonstrators.

The protests then snowballed. Within days, huge crowds across the country were demanding social and political change. Violent clashes, the seizure of the international airport and the sacking of civic buildings prompted the government to ask Russia for troops to quell the unrest.

Kassym-Jomart Tokayev, Kazakhstan’s president, justified the request to Moscow by claiming the violence was an “attempted coup d’état” co-ordinated by a “single [command] centre”. Instead, the uprising appears to have been sparked by a spontaneous protest that tapped into deep social and economic resentments.

“Initial demonstrators were people who traditionally protest . . . [but] they were joined by the youth from the outskirts . . . the poor that are unhappy with the staggering social gap that exists in Kazakhstan,” Evgeny Zhovtis, a prominent human rights activist in Almaty, said.

The first demonstration began in the small city of Zhanaozen over a local issue: a doubling in the price of liquefied petroleum gas, motor fuel of choice in Kazakhstan’s energy-rich west.

More than a thousand miles south-west of the capital Nur-Sultan, Zhanaozen is a national byword for human rights abuse after police killed 14 oil workers protesting over labour rights in 2011.

The spreading protest soon assumed other demands — chiefly, the removal of former president Nursultan Nazarbayev and his family from their behind-the-scenes positions of power and grip on the economy. Protesters chanted “Old man out!”, a reference to the 81-year-old autocrat who ran Kazakhstan for three decades until he handed the presidency to Tokayev in 2019.

Tokayev conceded to the protesters’ demands. He sacked his cabinet, reversed the fuel price increase, and removed Nazarbayev from his post as head of the powerful Security Council. Yet the situation in Almaty — Kazakhstan’s capital until Nazarbayev moved it to another city he later renamed after himself — continued to spiral out of control.

With a semblance of peace apparently restored by the weekend, the government has since tried to distinguish between the fuel protests and the subsequent violence.

“We heard all [their demands] . . . but this didn’t mean anything,” Tokayev said on Monday. “A wave of mass disturbances disguised as spontaneous protests broke out.”

Yet his notion the unrest was planned does not fit the chain of events, analysts said.

For one, the protesters had no clear leaders or shared demands — beyond a general dissatisfaction with Nazarbayev, argued Mukhtar Ablyazov, a former official living in exile in France.

“In an authoritarian country there can be no single [protest] leaders because they get destroyed,” he said. “People were just tired of Nazarbayev, things reached a critical mass.”

Almaty was also a natural setting for the eruption. The country’s biggest city is a key destination for internal migrants, has suffered a recent rise in crime, and has a reputation as a hub for protests, said Alexander Gabuev and Temur Umarov of the Carnegie Moscow Center.

“It was possibly the large number of angry young men that had nothing to lose that can explain . . . the transition to violence,” they wrote in a recent analysis.

Tokayev claimed the protests were then taken over by “religious radicals, criminal elements, out-and-out bandits, poachers and small-time hooligans.”

Indeed, local bloggers and social media posts suggest some protesters arrived on buses in organised groups. Some claimed they were paid. Social media videos also show people stealing weapons from the police and removing caches of arms from cars.

“It got out of control,” said Zhovtis, adding that Islamic radicals, which he said exist in small numbers in the country’s south-west, may have played a role.

But the claim by Kazakh officials that these “terrorists” were directed from abroad is not supported by strong evidence. Tokayev even claimed the “terrorists” had retrieved their fallen comrades’ bodies from morgues at night. “This is how they cover their tracks,” he said.

The case of Vikram Ruzakhunov shows how hard it can be to discern protesters’ motives. The prominent pianist from neighbouring Kyrgyzstan appeared on Kazakh TV last week with bruises on his face, confessing he accepted $200 to join the riots. But after Kazakhstan released Ruzakhunov on Monday, he told reporters upon arriving in his homeland that he made a false confession in the hope of being extradited.

Some analysts believe the troubles’ root cause is an internal power struggle between Tokayev and his predecessor, Nazarbayev, who has not been seen since the protests began.

“It was not surprising that Tokayev’s first move was to fire Massimov,” said George Voloshin, an analyst at Paris-based consultancy Aperio. “What we are seeing is a fight for power.”

Yet others in Nazarbayev’s inner circle appear to be untouched for now. So Massimov may have been made a fall guy for the crisis, said Simon Glancy, founder of Strategic Solutions consultancy, based in Almaty.

“Clearly some negotiations are ongoing,” Glancy said. “In any event, the Nazarbayevs are no longer a significant political force.”

Voloshin believes Tokayev needed back-up as he was unsure if Kazakhstan’s special forces would take his side after Massimov’s dismissal, given how they largely stood by as protesters burnt down the president’s Almaty residence. Tokayev alleging foreign involvement was only a pretext to legitimise the CSTO’s entry into a domestic conflict.

“The one thing you have to understand is the external factor will never be enough on its own. You have to see the internal ones behind them,” Lukashenko told the CSTO on Monday.

Aha! Moments Pop Up from below the Level of Conscious Awareness