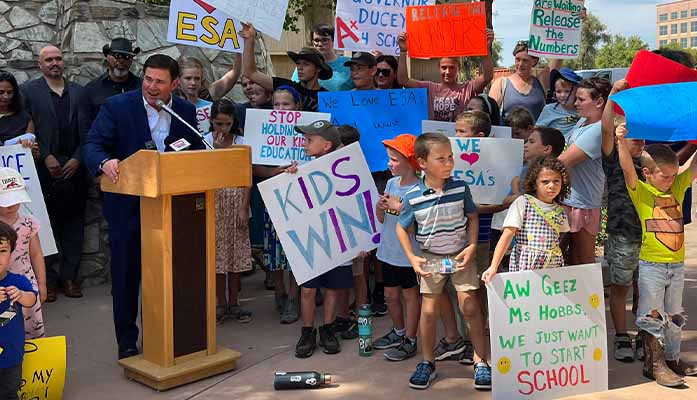 It isn’t the first time that Secretary of State Katie Hobbs is accused of being a racist, but popular radio show host, James T. Harris and the pro-school choice parents he joined on Wednesday hope it is the last time she gets to discriminate against Arizonans from a public office perch.

Harris joined Arizona Governor Doug Ducey and a group of pro-school choice parents in front of the State Capitol to call on Hobbs to take action on ESA expansion. Hobbs is hiding behind a state statute that gives her up to 20 days before she is required to issue an opinion as to whether the teacher union’s front group, Save Our Schools, submitted enough signatures to block a popular school choice bill and refer it to the 2024 ballot.

“I know that people don’t want to make things political because we have to be nice about things, but I am reminded of 60 years ago when we had a member of the Democratic Party down in front of schools, saying we won’t let a certain people in. Now we have a member of the Democratic Party standing in our way saying NO, we won’t let them out,” said Harris referring to the the Little Rock Nine, a group of nine African American students who were prevented from entering Little Rock Central High School in 1957.

“I want to be fair but there is a political ideology that is about fairness, which is about parents, and about children, and it’s about educational choices and it’s about freedom. That’s what we celebrate and that’s why we need to consider who we’re going to vote for in November,” said Harris referring to his close friend and the Republican gubernatorial nominee, Kari Lake.

Two courts have already ruled that Hobbs discriminated against a black staff attorney when she was in the Arizona legislature, so Harris’ words likely stung.

After the event, Harris was joined by Steve Smith, Arizona State director for the American Federation of Children, and Sergio Arellano, a father of four school-aged children and a Republican Party activist at the Secretary of State’s office. The group had hoped to share the message of the frustrated parents. They were turned away however, because Hobbs’ office has been closed to the public since the beginning of the COVID-19 pandemic back in early 2020. The office is only open to those with an appointment.

The teacher unions tried to repeal a new law that would have expanded Arizona’s Empowerment Scholarship Accounts (ESAs) to all 1.1 million of the state’s K-12 students, but they appear to have failed in their attempt to block the bill, sponsored by Representative Ben Toma and signed by Governor Ducey. Save Our Schools had 70 days to get nearly 119,000 valid signatures to block the school choice expansion bill by putting it to a vote of the people. Although the group claimed it had gathered more than 140,000 signatures, multiple independent counts of the signatures show that the group filed nearly 50,000 fewer signatures, closer to 90,000, which is well short of the minimum needed.

As previously reported by the Arizona Daily Independent, the ESA expansion makes available about $7,000 per K-12 student per year to assist families in customizing a child’s education experience to best meet their needs through private school tuition, homeschooling expenses, educational therapies, tutoring, and other expenses in exchange for not attending a public school or receiving a tuition tax credit.

Since the total number of signatures is under the minimum required, no validation process is actually required, merely a confirmation that an insufficient number of signatures were filed and that the effort failed. But ESA supporters are now concerned that Hobbs will withhold her report for the full 20 days she can take for the validation process. This would leave the ESA law on hold through mid-October and leave many students and parents unable to move forward with educational plans utilizing the expanded ESA option. Hobbs, a gubernatorial candidate, is running on an anti-school choice platform.

“Our kids have been used as pawns by the teachers’ unions long enough,” said Arellano when asked why he thought it was it was important to be on hand on Wednesday. “Enough is enough. Katie can bar the door now, but soon she will be out of power because parents are out of patience.