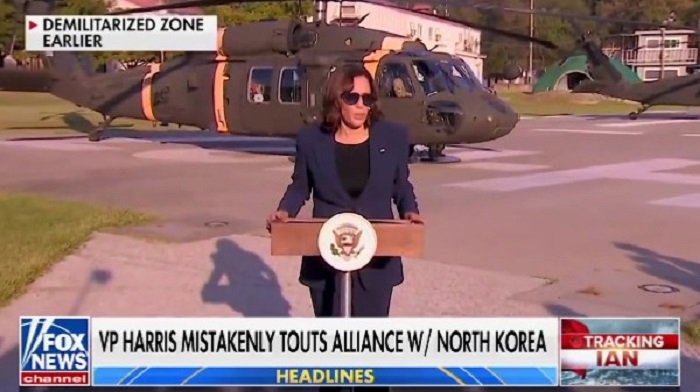 The latest example of Harris’ strong command of the issues came during a speech while visiting the Korean Peninsula’s Demilitarized Zone (DMZ) Thursday.

“The United States shares a very important relationship which is an alliance with the Republic of North Korea,” she said.

“It is an alliance that is strong and enduring,” Harris added.

The White House website provides transcripts of her speech in which the mistake has been corrected, only noting the “Republic of Korea,” which is South Korea’s name.

Which, had that been done in the previous administration, would have led to fact-checks and accusations of doctoring official White House documents. Instead, it will be dismissed as a legitimate clean-up operation on a sloppy Vice President with the oratory skills of a drunken street preacher.

“The United States shares a very important relationship which is an alliance with the republic of North Korea.” pic.twitter.com/8LInnss4nA

She said the United States has a “strong alliance” with “the Republic of North Korea.” You just can’t fix stupid. https://t.co/EP5wOAeBbL

RELATED: Kamala Harris Has To Ask If She’s In Cleveland Prior To Addressing Supporters

Kamala Harris has made past gaffes that involve mixing up locations. Just days prior to the 2020 election she had to ask an aide if she was in the city of Cleveland before addressing a crowd of supporters.

“Are we in Cleveland?” Harris asks before turning back to the crowd and shouting, “Hey, Cleveland, it’s Kamala!”

A hot mic caught Kamala Harris asking staff “are we in Cleveland?” before she spoke.

Well, at least she didn’t say ‘The Republic of Cleveland.’

Misspeaking has been a rich part of Kamala’s time in the White House, making one wonder if her incompetence is a communicable disease that she’s contracted from President Biden or if it’s been lurking beneath the surface all along.

America’s second most gifted orator behind Biden dazzled onlookers in a recent speech about “children of the community” outside of the Children’s National Hospital in Washington.

I mean, it has to be like watching Picasso filling up a canvas. The artistry of Harris’ voice is something to behold.

Here is the artist at work once again, somehow managing to fit the phrase “work together” or some such variation seven times in the span of about 30 seconds.

Admit it. You just got chills watching that.

Former President Donald Trump paid a visit to the Demilitarized Zone (DMZ) in 2019 but also ventured into North Korea, becoming the first sitting American Commander-in-Chief to do so as he met Kim Jong-un.

The two leaders at the time discussed resuming talks about a nuclear agreement, making it a truly historic visit.

Two years prior to that, Dennis Rodman, basketball Hall of Famer and self-designated international peacekeeper, paid a visit to North Korea and gifted their leader a copy of Trump’s book, The Art of the Deal.

If you’re just waking up: Dennis Rodman gave a copy of Donald Trump’s The Art of the Deal as a gift for Kim Jong Un https://t.co/z1sgdEnX8Z

Perhaps upon his next visit, Rodman will have a new book to hand to Kim Jong-un, authored by Kamala Harris and titled ‘Fweedom in the Republic of North Korea.’

Kamala Harris on CNN retells the “fweedom” story, which sounds very similar to a story MLK told to Playboy in 1965, without mentioning the “fweedom” part pic.twitter.com/nEBMVKemUZ