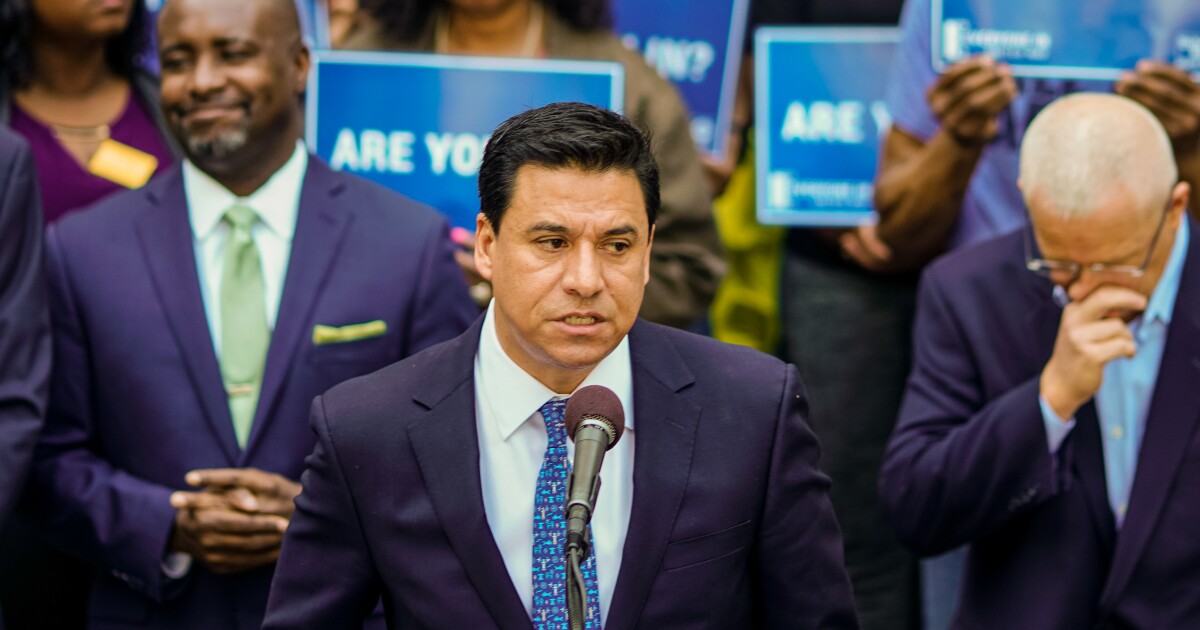 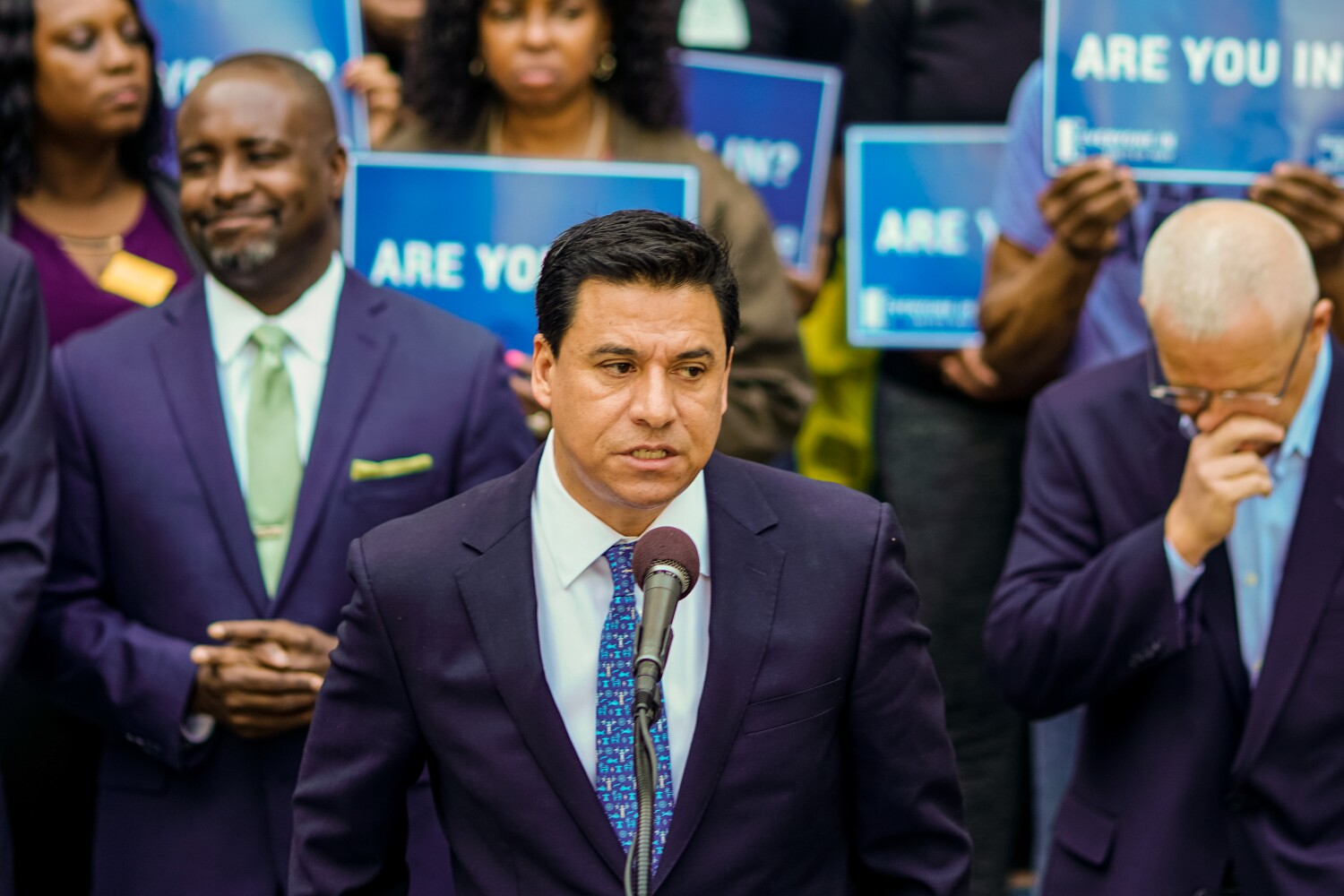 Five years ago, real estate developer Dae Yong Lee had a big problem: A labor group with serious political connections had filed a challenge against his plan for a 20-story tower in downtown Los Angeles.

Lee, also known as David Lee, paid $500,000 in cash to get rid of the union opposition. That decision had enormous consequences for the businessman, forming a major part of the FBI’s corruption case against former City Councilman Jose Huizar.

And they handed guilty verdicts on the same three counts to his company, 940 Hill, which had sought city approval for the residential tower.

The verdicts delivered a critical victory to the U.S. attorney’s office in the first of three trials encompassing the sprawling corruption case against Huizar.

The Lee case provided a sneak preview of some of the arguments that will be heard next year when Huizar goes on trial on racketeering, bribery and other charges, in a case dealing with financial benefits allegedly provided in exchange for city approvals of downtown high-rises. Huizar has pleaded not guilty on all counts.

For nearly two weeks, prosecutors portrayed Lee as a sophisticated player in Huizar’s bribery scheme. They alleged he provided $500,000 in cash to ensure the councilman would support his project and get rid of the appeal challenging it. The appeal was filed by the construction trade union group known as Creed LA.

Justin Kim, a political fixer and campaign fundraiser, picked up cash from Lee, handing a portion of it to Huizar’s high-level aide, George Esparza. Esparza, who has pleaded guilty in the case, testified that he took part in two “money drops” near Lee’s office.

Esparza testified that he delivered $200,000 in bribe money to Huizar, only to be told by his boss that he should hide it. Huizar later tried to get the money back, Esparza told the jury.

Kim, who worked as a real estate appraiser before pleading guilty, admitted keeping a portion of the bribe, as did Esparza. Both Kim and Esparza are awaiting sentencing.

Assistant U.S. Atty. Veronica Dragalin sought to draw parallels between Huizar, who wielded enormous power over downtown development, and Lee, who was pursuing multiple downtown real estate projects. Both men had “lackeys” to do their dirty work, Dragalin said, with Kim assisting Lee and Esparza working for Huizar.

Both men “didn’t want to be the ones caught holding the bag of cash,” the prosecutor said. “So they passed it through their middlemen.”

Ariel Neuman, Lee’s lawyer, said his client believed the $500,000 had gone to pay for legitimate consulting fees on the tower project. Neuman also said it was not unusual for Lee, who works in the fashion industry, to have large amounts of cash in his office.

Throughout the trial, Neuman took special aim at Kim, who testified that Lee knew the money was a bribe. Neuman said Kim, who has also pleaded guilty in the case, was a “demonstrated liar” who received a sweetheart deal from prosecutors, avoiding charges on an assortment of crimes.

Kim was determined to make himself indispensable to prosecutors before his sentencing — and was “willing to say anything or do anything to save himself,” Neuman said.

During a withering cross-examination, Kim said it was his opinion that Lee knew the money was a bribe. Neuman said Lee’s opinion was not enough for a jury to convict his client. During closing arguments, Neuman implored the jury to put Lee’s “nightmare to an end.”

“He’s a businessman who trusted the wrong person — the worst kind of person,” he said.

Neuman expressed disappointment in the jury’s verdict, saying the evidence showed that “Mr. Lee was a victim of other people’s fraud.” Lee intends to appeal and already has a separate motion before the court seeking to dismiss the fraud charge.

Over the course of the trial, jurors saw photos showing stacks of $100 bills, painstakingly documented by Esparza. They heard government audio of a conversation between Esparza and Huizar, allegedly held in the councilman’s private City Hall bathroom.

Jurors also were shown transcripts from a secretly recorded discussion between Lee and Kim in March 2019 — after Huizar’s home had been raided. During that conversation, Lee advised Kim not to worry. “You don’t know how much they know,” he said.

According to the transcript, Lee also told Kim that Huizar probably wasn’t in trouble for “one or two things.”

Dragalin, the prosecutor, highlighted that exchange, saying Lee had been hoping his crimes would “pale in comparison” to other corrupt activities by Huizar. Neuman said Lee sounded unbothered because he had no reason to be.

“He had not done anything wrong,” Neuman said.

Sentencing for Lee is scheduled for Sept. 19. The next trial in the Huizar case is set for October and will focus on a different business, real estate company Shenzhen New World Group, and its chairman, Wei Huang.

That case centers on allegations that Shenzhen and Huang helped Huizar pay off a staffer who had accused him of sexual harassment. At one point, Shenzhen had been seeking to build a 77-story downtown skyscraper.

The company has entered a not guilty plea. Huang is a fugitive and has not appeared in court.