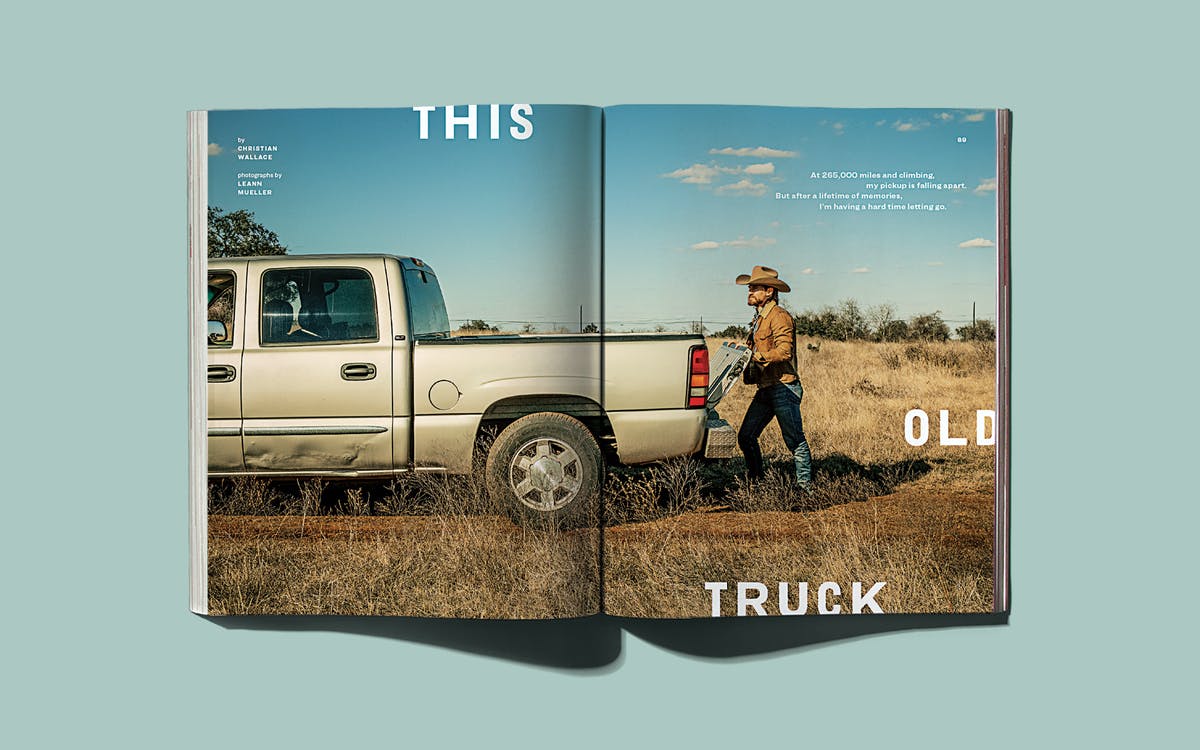 My opinion’s worth exactly the amount you paid for it, and it feels a bit presumptuous to even write you, but ultimately I feel compelled to apologize. I stared at Christian Wallace and his truck on my coffee table for the better part of a month, thinking about how dumb I am to pay to read about a guy talking about his truck [“This Old Truck,” April 2022]. I don’t care about trucks. I hate being trapped in conversations about trucks. I thought I didn’t want to read about a truck. I was mistaken. I very much enjoyed your story.

I’ve always appreciated how Larry McMurtry shed a little poetry and honesty on his generation of Texas, and it was pleasant to read a little honesty about a generation I can relate to more directly. Thanks for writing a story worth reading.
Matt Wilson, McAllen

I read the article on the old GMC truck and found myself quite moved. I am hardly a Texan, although I have driven across the state twice and have come to recognize the difference between a hot day and a Texas hot day. I’m a college teacher who has lived entirely in New York and Massachusetts. I guess it is predictable, but yeah, this Northern guy has always driven a Volvo.

Actually, I’ve had a series of them. My favorite was a red 2001 S40, a car that I never really gave away but was somehow acquired by my daughter. I was saddened when her mechanic had “the talk” with her about the hard truth regarding her car’s future. In the car’s absence, so too goes one’s grasp on a part of life already lived. I like Christian’s very zen college roommate in the article, and I suspect that he would say that it is time for Christian to thank his GMC and move on to a new Silverado.
Jim Carey, Syracuse, New York

Chris Vognar must have written his critique of Taylor Sheridan’s latest works [“Rope Operas,” April 2022] from a high-rise in Houston, and he must have been determined not to give too much credit to shows that were filmed partly in North Texas. To say that Elsa’s voice-overs in 1883 “sap whatever grit and realism the show has accumulated” is flat-out wrong. We are seeing the journey through a young woman’s eyes, which separates this body of work from other wagon-train-heading-west plots. And to say “much of the acting in 1883 is merely adequate”! From Sam Elliott to Tim McGraw to Faith Hill to Isabel May to LaMonica Garrett and the rest of the actors, this has to be the best casting since Lonesome Dove. Send this guy to cover shows that are really “slapdash” to see if he knows the difference.
Cathey Sims Hartmann, Bluff Dale

Editors’ note: An article in our May 2022 issue, “What Drives Greg Abbott?,” incorrectly reported Kinder Morgan’s profit during the first quarter of 2021. The correct figure is $1.4 billion. The article also misspelled the name of H-E-B president Scott McClelland.

This article originally appeared in the June 2022 issue of Texas Monthly. Subscribe today.