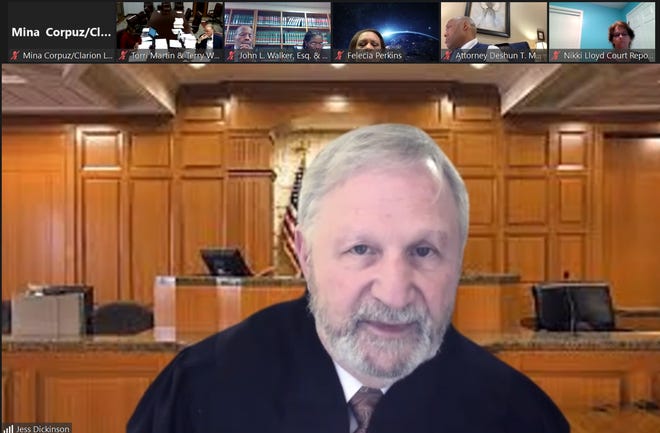 A judge will not take up the issue of how Jackson Mayor Chokwe Antar Lumumba used his veto power and whether that validates the city’s emergency garbage contract with Richard’s Disposal Inc.

Special Judge Jess Dickinson issued his third ruling Sunday in the lawsuit between the mayor and City Council with several garbage companies as intervenors. He let his previous April 1 decision stand as the court’s final ruling.

“This court makes no ruling and expresses no opinion as to whether Mayor Lumumba’s veto of the City Council’s vote to reject Richard’s Disposal Inc.’s contract was consistent with or prohibited by the Constitution and statues of the State of Mississippi,” Dickinson wrote in his opinion filed Sunday.

At his weekly press conference, Lumumba said he appreciates Dickinson and his ruling on the case. The mayor said he understands procedurally, the judge was not asked to rule on his use of a veto, which is why Lumumba sought an opinion from a judge in Hinds County Circuit Court.

“We wanted clarification to make clear that power of veto does apply and it applies to a negative vote just as it does an affirmative vote,” Lumumba said.

Deshun Martin, attorney for the City Council, said the council has fundamental constitutional rights that will not be ceded to another branch of government, and democracy is exercised through majority rule.

“Fundamentally that order left out the veto question,” he said Monday. “It fundamentally said the bedrock principals in the Mississippi Constitution stand.”

In response, Lumumba said the point of a veto is to override a majority vote. He added it is a tool that is meant to be a check on the legislative branch, just as that branch has powers to check the executive branch.

Dickinson filed his ruling days after calling all parties to Hinds County Chancery Court Friday to hear arguments from all parties.

In last week’s hearing, Dickinson said the main question was whether the act of a legislative body such as the City Council voting no on a contract is the same as adopting an ordinance, which can be vetoed. Dickinson said that issue hasn’t been decided in Mississippi.

On April 4, the mayor filed a lawsuit in Hinds County Circuit Court asking a judge about whether he can veto a no vote by the council. The case is being transferred to Hinds County Chancery Court for Dickinson to oversee.

A week earlier on March 31, the day the city’s former emergency garbage collection contract with Waste Management expired, Dickinson included a footnote in his ruling saying Lumumba could veto a council no vote.

Acting in line with the ruling, the mayor vetoed the council’s no vote to ratify a one-year emergency contract for Richard’s Disposal, which began picking up garbage from residents’ homes April 1.

The day after issuing his initial order, Dickinson vacated the order by taking the footnote out, saying he wasn’t asked to address the mayor’s veto power.

Arguments in the case:Judge could rule on Jackson mayor’s veto power in garbage contract lawsuit

In both rulings, Dickinson wrote an enforceable contract negotiated through the competitive bidding process or a declared emergency has to be approved by the City Council.

In his Sunday ruling, he acknowledged the case’s procedural history “understandably has created disagreement and uncertainty” among all parties.

Once the case is transferred from circuit court, Dickinson can have a final say on the mayor’s lawsuit, including whether to take up a temporary restraining order against Lumumba’s enforcement of the Richard’s Disposal Inc. contract.

On behalf of a majority of the council, Martin sent a cease and desist order to the company’s lawyers, saying there is no legal contract for it to pickup garbage and get paid for the work.

During his press conference, Lumumba said Richard’s Disposal is still collecting trash despite hiccups with not having a lot of time to prepare for the work, not having access to collection routes around the city and experiencing problems with drop off at the transfer station last week.

The city will host a town hall Thursday to speak with residents about garbage issues, including helping them understand what is going on. The townhall is scheduled for 6 p.m. at New Jerusalem Church’s  south campus at 1285 Raymond Road.