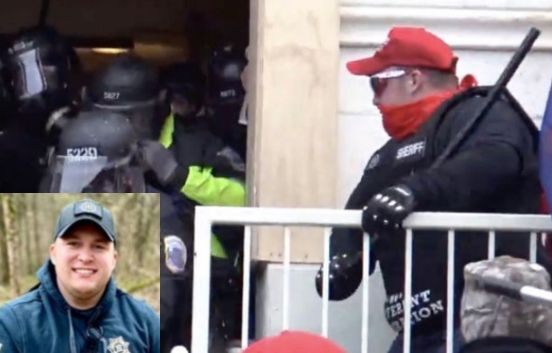 Arrested mid-August for his part in the insurrection, McAbee, 27, was seen via a Metropolitan Police officer’s body-worn video dragging the officer to the ground and repeatedly hitting and kicking him in the head and body. However, on September 8, a Tennessee federal magistrate judge ordered McAbee released with conditions you might give a middle schooler. Ordering him to “refrain from using social media or other websites related to the insurrection.” Obviously, Tennessee takes care of its own.

Federal prosecutors filed an emergency appeal of the judge’s ruling, and Wednesday, the case was reviewed before U.S. District Judge Emmet Sullivan. Sullivan referred to the video as “very disturbing” and called McAbee’s “Sheriff” patch “outrageous.”

According to Courthouse News, footage clearly shows McAbee and co-defendant Clayton Ray Mullin grab the officer’s legs while the two proceeded to pull the officer at both ends of his body. Another officer attempted to intervene, so McAbee swung at him with his metal gloves and then returned to the first officer, pulling him down a flight of stairs and pinning him to the ground.

Prosecutors point to 5:35, where the group can be seen engaging in a riot. View below.

Sullivan voiced his doubts about McAbee being able to follow the ridiculous restrictions imposed by the magistrate.

“He’s raised his right hand, probably put his left hand on the Bible, more than once and swore to administer justice,” Sullivan said. “If he didn’t do that on Jan. 6, how can the court take any comfort in knowing that he will abide by the court’s directives to do certain things going forward?”

McAbee is just one of the many law enforcement officials arrested and charged with more than 600 people in the Jan. 6 insurrection. And like many of them, he was pleased with his behavior during the riots, bragging to a friend via text days following:  “I’ve shed blood for my country. By the hands of the swamp. I will shed more in the days to come. But I will not forget the Oath I swore years ago to protect the America I once knew. / necisque libertas [liberty or death].”

According to Law & Crime, the sheriff who was never a sheriff was accused of “us[ing] and carry[ing] a deadly and dangerous weapon, that is, a baton, flagpole, crutch, and reinforced gloves” to knowingly enter or remain in a restricted building and grounds (count 16); impeding and disrupting orderly government business (count 17), and engaging in physical violence against any person and property in a restricted building and grounds (count 18). Finally, he is among the litany of defendants charged with “knowingly engag[ing] in an act of physical violence within the United States Capitol Grounds and any of the Capitol Buildings” (count 22).

Sullivan said if he does decide to release McAbee before his trial, it will not be into the custody of  McAbee’s wife, who the judge says he doesn’t trust to report violations of the conditions of the pretend sheriff’s release, HuffPost reports.

Rich medieval hipster was buried with his fancy beard comb