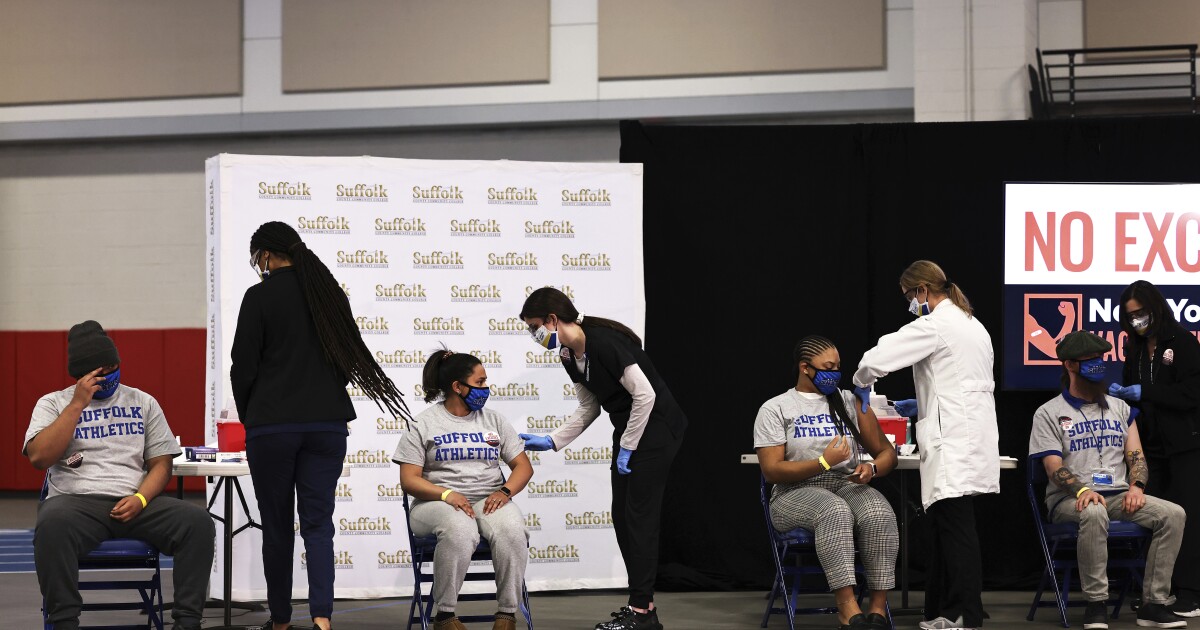 College health officials scrambled on Tuesday to comply with a federal recommendation to pause the use of the Johnson & Johnson vaccine.

The U.S. Centers for Disease Control and Prevention and the Food and Drug Administration said in a joint statement that the agencies are reviewing a rare and severe blood clot in six people who received the vaccine, out of more than 6.8 million doses administered. The centers’ Advisory Committee on Immunization Practices is set to investigate the cases and recommends temporarily suspending use of the vaccine until that process is complete.

The stoppage comes at a time when the United States’ vaccination-production effort is in high gear, and many colleges have other vaccine options. Even so, the Johnson & Johnson vaccine is seen as a key tool in reaching transient populations like the homeless. This is also a bad time for colleges, as finals are approaching, and students wanting to get home might not stick around for the three or four required weeks for a second dose of the Pfizer or Moderna vaccines.

But ultimately, the pause was seen more as a blip — a “curve ball,” as Chancellor Jim Malatras of the State University of New York system put it in a news conference — than as a broad blow to colleges’ vaccination strategies. The Johnson vaccine was usually a supplemental tool in many colleges’ Covid-19-immunization efforts. The biggest damage, several campus officials said, was to the psychological effect this could have on students who were already vaccine hesitant.

“From a practical sense, it’s maybe a nothing,” says Michael Lauzardo, who is in charge of the University of Florida’s mass-vaccination effort, which doesn’t use the Johnson & Johnson vaccine. “We’re going to be tripping over vaccine here real soon with Pfizer and Moderna. We’re going to have adequate vaccine supply moving forward.”

But he added: “From a psychological sense, vaccine hesitancy is a fragile thing.”

From a psychological sense, vaccine hesitancy is a fragile thing.

Ohio State University put an immediate hold on all Johnson & Johnson vaccine appointments. No doses of the vaccine were scheduled to be administered on Tuesday, and officials at the university’s Wexner Medical Center will make decisions about the administration of the vaccine based on additional guidance from the CDC and FDA. Some Ohio State students were scheduled to receive Johnson & Johnson vaccines on Wednesday, and the university was working to get those and future appointments rescheduled for a first dose of Pfizer, or canceled.

The Wexner center has administered 1,100 doses of the Johnson & Johnson vaccine since early March, which accounts for less than 1 percent of the more than 163,000 total vaccine shots given since December.

Students, faculty, and staff at the University at Albany who were slated to receive Johnson & Johnson vaccines on Tuesday were urged to keep their appointments. The university planned to administer Pfizer vaccines instead. “Do NOT cancel your appointment!” the university tweeted on Tuesday morning.

It was part of a mad-dash effort that included acquiring 1,200 doses of the Pfizer vaccine from the county so that most of the students who had Johnson & Johnson appointments could still get vaccinated, said Stephen Conard, continuity and emergency manager at the University at Albany. This wouldn’t have been possible without the close partnership between the university and local health officials, Conard said.

Conard said officials knew they had to quickly communicate when they saw students canceling their appointments. They emailed each student with an appointment, and then turned to social media to spread the word that Pfizer vaccines were available. Most students kept their appointments. Before news of the pause, Conard had expected to vaccinate about 1,600 people, but as of midafternoon, he expected to end the day with about 1,200 vaccinations given.

One challenge was conveying to students expecting the one-dose vaccine that they now had to be around three weeks later for the second Pfizer shot, or find somewhere else to get it. The university “worked with students to make them understand the need of having that second dose,” Conard said.

Chancellor Malatras said that SUNY is following the guidance of federal and state officials and pausing its use of the vaccine. He said the system is working with the state to acquire alternate vaccines for students.

“We just plead with our students: Contact your campuses, contact your vaccination sites, get the facts, because in many cases they can still receive a vaccination today,” Malatras said at a news conference.

Malatras said that SUNY had received 21,000 doses of the Johnson & Johnson vaccine from the state. “Those slots were taken up right away,” he said. “The demand is there. We may just have to change how we approach this a little bit, give different alternatives for our students. But I still think we’ll be able to get many of our vaccinations done before they go home, and if not, while they’re at home for summer break.”

West Virginia University administered 846 doses of the Johnson & Johnson vaccine at a clinic on Thursday and was set to host another on Wednesday, but now is working to reschedule those appointments for the other vaccines.

“We have sufficient Pfizer and Moderna vaccines to continue our goal of vaccinating all West Virginia residents,” said Clay Marsh, a vice president and the university “coronavirus czar,” in a news release, “and the key to our success or failure to save lives and protect West Virginia citizens is the number of people choosing to get vaccinated.”