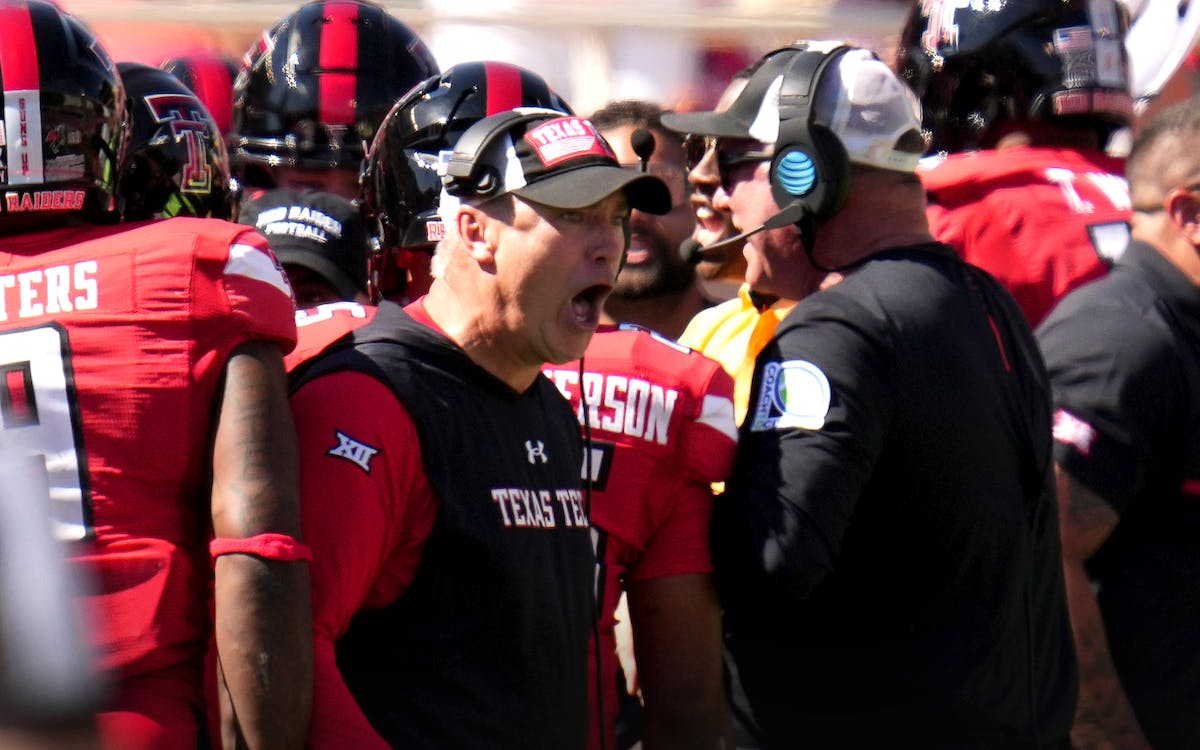 Joey McGuire said his phone started blowing up right about the time his Texas Tech Red Raiders had beaten the Texas Longhorns 37–34 in overtime Saturday afternoon. Right at the same time that fans rushed onto the field in Lubbock and smothered him in a wild scene that earned a fine from the Big 12 and captured why few things come close to college football in delivering great theater, raw emotion, and the all-important bragging rights to hold over a coworker or neighbor.

That night, McGuire and his wife Debbie celebrated at their Lubbock home with friends and food and beverages. Texas Tech’s happy first-year head football coach lit a ceremonial victory cigar at one point and toasted a job well done. He kept glancing at his phone throughout the evening, and said he lost count of the congratulatory messages at 500. He’d received more than 1,500 when Texas Tech hired him last year, and just like the texts that poured in last Saturday, hundreds of them came from high school football coaches around the state. Last weekend, he vowed to answer every single one of them before going to bed.

Those messages represent the road McGuire has traveled, the improbability of his story, and how hundreds of his peers in Texas high school football are rooting for him to succeed. He was an unconventional hire by Texas Tech athletic director Kirby Hocutt because McGuire had never been a college head coach or even an offensive or defensive coordinator. He had spent the previous five seasons as an assistant at Baylor, but before that, his entire professional experience came at the high school level, where the former head coach of Cedar Hill High School had turned a perennial loser into a three-time state champion and regular playoff contender over fourteen seasons in the Dallas suburbs.

“People ask me all the time, what’s the difference?” McGuire told me. “Whenever it comes to dealing with players, it’s making sure they know how much you care about them and want them to be successful. That’s the same everywhere. What you do every day, how you deal with your staff, there’s really not a lot of difference.

“I tell everybody I’m a Texas high school coach that gets to coach college football,” he went on. “That’s part of my DNA. The high school coaches understand that and how I got here. I’m a part of that fraternity and hoping everybody understands that we try to do it the right way, that we care about players.”

His arrival in Lubbock struck a chord with Texas Tech alumni in a way that none of Mike Leach’s three earlier successors—Tommy Tuberville, Kliff Kingsbury, and Matt Wells—did. Last fall, when the college football rumor mill started heating up with reports that McGuire could be taking over the Red Raiders, Tech fans rallied on social media using the hashtag #HireMcGuire.

“Obviously, he’s very well-known for the success that he had at the high school level,” Hocutt told me. “And, he had built relationships with a significant number of Texas Tech alumni and Texas Tech. Those individuals saw in his character, and who he is as a person, just a set of values and a sense of grit and work ethic that’s synonymous with West Texas and Texas Tech University.”

McGuire fit what Hocutt wanted: someone familiar with Texas high school football and someone absolutely committed to Texas Tech. “I was born and raised in the state of Texas,” McGuire said. “I’ve never been anywhere else, and I wear that proudly. I think that’s how Tech fans are. There’s great pride in being from Texas. There’s great pride in their university. I think they know I’m one of them.”

Ten months after hiring McGuire, Hocutt said the coach has been everything he hoped for. “It’s just how he interacts with people, the way he connects,” he told me. “He stops and engages everyone in the building. He just has a passion for what he’s doing and a genuine, authentic spirit that tells you he wouldn’t want to be doing anything else in the world except coaching Texas Tech football.”

He quickly won his players over. “He saw something special at Texas Tech, which there is,” Tech defensive lineman Tyree Wilson said before the season. “We just needed the right person to run it and I think he’s the right person.”

Last Saturday, the Red Raiders were coming off a road loss to North Carolina State, and Texas, despite the decline of the program in recent years, is still seen as something of a measuring stick for the success of Tech’s program. Also, because Texas has plans to join the Southeastern Conference no later than 2025—and probably sooner—this was shaping up to be a possible last chance to beat the Longhorns in Lubbock.

NCAA Conference Realignment Got You Down? Blame Texas.

Tech officials would like to continue the series, but Texas seems more likely to schedule a nonconference tomato can rather than risk another kick in the teeth like the one Tech delivered on Saturday. “I really believe that it’s in the best interest of the state of Texas for these two universities to continue to play each other,” Hocutt said. “I know that Governor Abbott continues to be our champion. I just believe that it’s too important not to continue.”

Nevertheless, Texas Tech showed more smarts and more toughness and more resilience in rallying from a 14-point second-half deficit Saturday to win 37–34 in overtime, shortly after forcing a fumble from the Longhorns’ best player, running back Bijan Robinson.

Tech plowed through the Texas defense for almost 500 yards (479) and dominated total plays (100–60), first downs (31–20), and time of possession (36 minutes to 24 minutes). Tech forced the only two turnovers of the game. Donovan Smith, who began the season as Tech’s number two quarterback, passed for 331 yards and led the Raiders on scoring drives on four of their final five possessions in regulation. Senior running back SaRodorick Thompson rushed for 70 yards, and Myles Price caught thirteen passes for 98 yards. Sometimes, numbers can mislead, but these stats say the better team won.

McGuire showed no fear, going for it eight times on fourth down and converting six. This tactic sent a powerful message to his players about the confidence he has in them. “You want to make sure our guys understand how much I believe in them, how much I believe in everybody, the coaches, and how much we believe in each other,” he told me. “We’ve just got to keep fighting, good plays, bad plays, no matter what’s going on, just keep at it.”

When kicker Trey Wolff’s twenty-yard field goal sailed through the uprights in overtime to end it, a very large and very rowdy street party ensued. Afterward, McGuire did his best to undersell the magnitude of the game, saying again and again: “It means we’re 1–0 in the Big 12. We’ve got to do it again next week.”

“You know, it’s probably bigger than what I’ve made it,” he told me. “I’ve intentionally tried to make it not as big. A lot of times people can handle failure. Sometimes, it’s easier than handling success. So I’ve tried to minimize it.”

But McGuire knows darn well that beating Texas is a big deal, no matter how far the Longhorns have fallen. Beating Texas ignites fans, generates hundreds of text messages, and gets the attention of recruits who might not have been considering Texas Tech.

“Whenever we come out of the season, and we get a chance to take a breath and kind of go back and look at the year, I think it’s gonna be a really big deal,” he said. “I think it has a chance to establish us as who we want to be and who we’re going to be in college football.”

Last season, his Baylor boss, Dave Aranda, told reporters: “Joey’s got a great heart, a real fondness for his players and the team. I think he’s a guy who brings energy and brings a spark and fire to the times when it’s needed. He’s a ball coach’s ball coach.”

But last week, when Texas took that two-touchdown lead, the game seemed to be headed in a predictable direction. Texas had won seven straight in Lubbock. The Red Raiders’ last home win over the Longhorns came in 2008, known to fans ever since as “the Michael Crabtree game.” Texas was ranked number one in the nation at the time and was eyeing its second national championship in four years. But Crabtree got loose for a 28-yard touchdown catch with one second remaining.

That upset might be the biggest win in Texas Tech football history, but Saturday’s win over Texas was almost as sweet. In the final twenty minutes of the game, Tech’s players showed more resolve, more tenacity, and more of just about everything than their more heralded opponents.

“At any point, they could have given up,” McGuire said. “They didn’t. We asked them to come out at the half and just keep fighting because good things are going to happen. What’s really fun is these guys believe, and whenever you have results like this, it just fires that belief even more.”