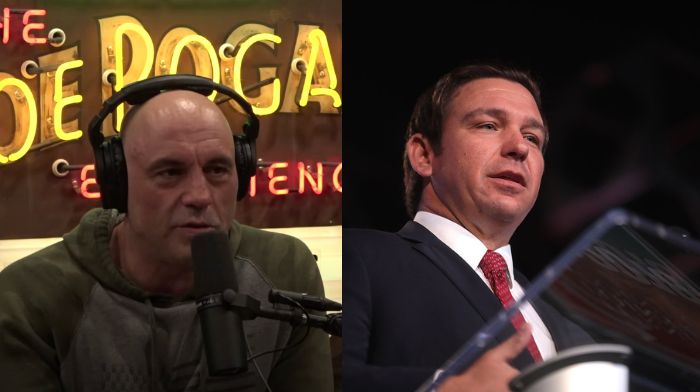 Florida Gov. Ron DeSantis has been turning heads with his performance as Governor of Florida – so much so that he’s getting crossover appeal. On the latest episode of his podcast, “The Joe Rogan Experience,” Rogan stated that DeSantis “would work as a good president.”

The two began to discuss current events, and while discussing President Joe Biden, Rogan referred to him as a “dead man as President.”

It Took 14 months to go from “build back better” to “there will be food shortages”.
—Joe Rogan

RELATED: White House Under Fire For Promoting Site That Tells Pregnant Teens How To Get An Abortion, Avoid Involving Parents

Rogan stated his full thought on Biden’s presidency, “Yeah so all this stuff is happening while we have a dead man as president. It’s not fun.”

Naturally, that begged the question Carano then asked: “Are you throwing out any support towards anyone, or are you gonna hold off…?”

Rogan then confirmed that Musk had tweeted that he would support DeSantis – with the Florida Governor humorously joking that he appreciates the support of an African-American. (Musk was born in South Africa.)

Rogan elaborated on his statement saying, “Yeah, I think Ron DeSantis would work as a good president. I think, I mean, what he’s done for Florida has been admirable.”

Carano jokingly said, “Look it, I feel like I’m doing breaking news right now. That wasn’t even on purpose.”

I wish there was as much outrage over Ghislaine Maxwell’s client list as there was over Joe Rogan’s guests.

Backing Up His Argument

In Rogan’s view, not only did he support DeSantis’ handling of the media during the COVID-19 outbreak, but also the steps he took in Florida during the pandemic.

Joe Rogan became a controversial figure when, in the fall of 2021, he had announced that he had contracted COVID, and contrary to what health experts were recommending at the time, Rogan announced he had taken monoclonal antibodies and ivermectin – a drug the left vilified as “horse dewormer.”

Earlier in April of 2021, Rogan had also come under fire for saying that he did not think young people needed to get vaccinated for COVID. In an interview with “Variety,” Rogan said,

“I’m not an anti-vax person. In fact, I said I believe they’re safe and I encourage many people to take ’em. I just said, I don’t think that if you’re a young, healthy person, that you need it.”

Back in February, aging hippies Neil Young and Joni Mitchell threatened Spotify, the streaming service that carries Rogan’s podcast, that they would pull their music from the service’s music library if Spotify did not cancel Rogan for spreading what they deemed “misinformation” about COVID. However, just prior to the controversy, Spotify had inked a deal with Rogan for $100 million.

The actions of Young and Mitchell made the topic of free speech, something both would have fought for during their heydays in the 60’s, a hot topic once again.

After all that energy against Joe Rogan, none about this. https://t.co/1Ib0D1s6Fi

Neither Donald Trump or Ron DeSantis has made any announcements about 2024 as yet. Many Republicans believe that Trump will run again. But will DeSantis go for it in 2024 or possibly wait it out until 2028?

Straw polls are interesting things. Back in March, as conservatives gathered for the annual Conservative Political Action Conference (CPAC), the straw poll conducted there was not even close. Trump ran away with 59% of the vote. DeSantis was next with 28%.

Fast forward to May. Attendees at the Wisconsin State Republican Convention had other ideas. There was also a straw poll conducted at that gathering, but the results were very different.

DeSantis came in first with 38% of the vote, Trump was second with 32%. The next closest candidate was former South Carolina Gov. Nikki Haley at just 7%. While many would be GOP candidates may be waiting to see what Trump will do, many establishment Republicans say the time for DeSantis is now. But at age 43, DeSantis could have a lot left in him.

Rogan also had this to say about Ron DeSantis, “You know, he is not perfect. He is a human being. But um, what he’s done is stand up for freedoms.”

Maggie Haberman Refuses To Say Trump Is A Racist