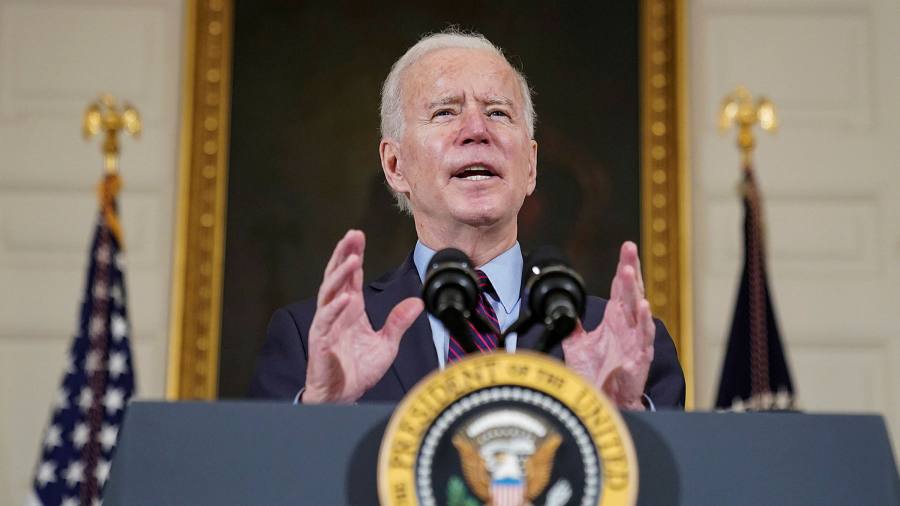 US President Joe Biden is poised to sign the $1.9tn stimulus package on Thursday afternoon, enacting his top legislative goal for his first months in office and delivering a fiscal jolt to the American economy.

The White House said that Biden would sign the legislation at 1.30pm on Thursday in the Oval Office, a day earlier than previously announced.

Biden’s signature, just a day after the House of Representatives voted to pass the final version of the legislation in Congress, will allow the US administration to rapidly implement the bill over the coming weeks.

The legislation includes $1,400 direct payments to Americans earning $75,000 per year or less, which will have to be quickly disbursed by the US Treasury department. The cheques could deliver a big increase in spending as early as April.

Biden’s signature will also give a green light for states to being processing the extension of federal emergency unemployment benefits, worth $300 per week, until early September. Without the stimulus package, the aid was due to expire on March 14.

“Because Congress enrolled the bill more quickly than we anticipated, the president will sign the American Rescue Plan into law today within the hour,” Jen Psaki, the White House press secretary wrote in a tweet, adding that vice-president Kamala Harris would also attend.

Psaki added that a ceremony to mark the passage of the bill would still be held on Friday.

White House officials and Democratic lawmakers have touted the stimulus bill as a chance to reboot the US economic recovery and shield vulnerable households from the worst impacts of the pandemic.

The plan did not receive any Republican support, however, as conservative lawmakers attacked it as a vehicle for excessive and unnecessary spending.

The signing of the stimulus plan will serve as prelude to Biden’s first primetime television address to Americans on Thursday evening, marking the anniversary of the initial coronavirus lockdowns in 2020.

According to a White House official, Biden is expected to speak for about 20 minutes about the “sacrifices made by the American people” due to the pandemic and the “greatest operational challenge the country has ever faced” in rolling out vaccinations.

“The president will lay out the next steps he will take to get the pandemic under control, level with the American people about what is still required to defeat the virus and provide a hopeful vision of what is possible if we all come together,” the White House official said.