Joan McCarter on The Dean Obeidallah Show: Infrastructure, Manchin, and the filibuster 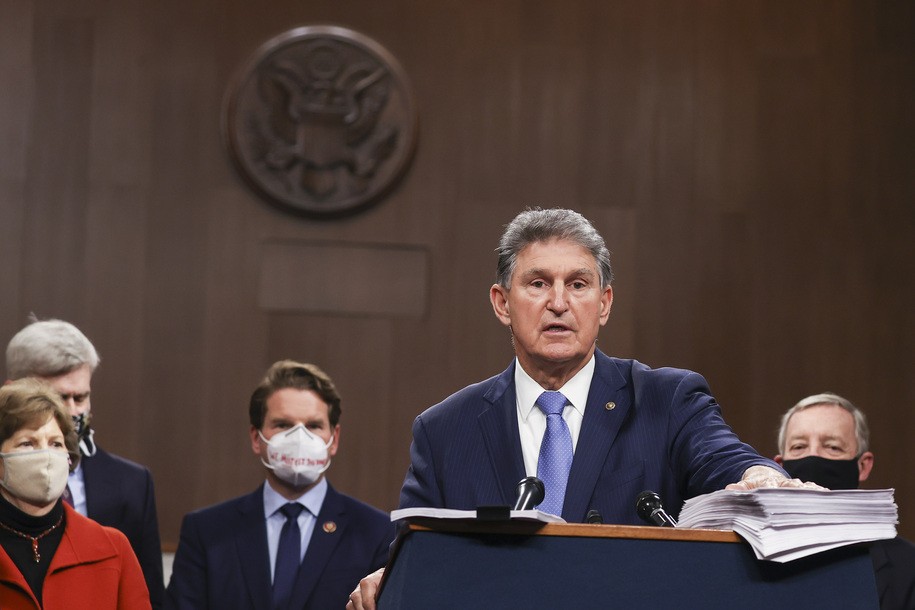 Sudbay and McCarter opened their conversation by directly addressing Manchin’s role in deciding how things will play out with tension growing over the infrastructure bill and other legislation in Congress. For instance, the Rules Committee deadlocked on the For the People Act but Senate Majority Leader Chuck Schumer vowed to bring the bill to the floor. Similar disagreements over other pieces of legislation are likely, giving Manchin an outsized role in determining the fate of these bills. He appears to be choosing to protect the filibuster, which could have potentially destructive consequences, as McCarter elaborated:

[Ending the filibuster] is really is how we save democracy … it’s how we have robust, secure election systems in every state; it’s how we have paper trails; it’s how we have election integrity; and it’s how we make sure everybody actually gets their vote who’s entitled to have it. And without that, looking at what every Republican legislature has done since January, it’s hard to imagine they’re going to allow Democrats to ever have majorities in Congress or the White House again. So really, it is that critical … right now.

But Joe Manchin said, ‘No, not going to do that.’ He said, instead, ‘I’m going to support the John Lewis Voting Rights Act’ … but the thing is about saying he’s going to do that is, that’s going to get filibustered, too. Senate Republicans are not going to let that happen, and Manchin is handing McConnell this big gift, saying, ‘You can keep all your dark money, you can keep your voter suppression’—and on top of that, he’s saying, ‘Oh, by the way, you have a valid complaint in saying our elections aren’t secure,’ which is, in essence, validating the Big Lie.

Much of this is due to Manchin’s commitment to the notion of “bipartisanship,” which Sudbay and McCarter believe is no longer a realistic or useful strategy given the Republicans’ automatic opposition to working with Democrats. In particular, Sudbay expressed exasperation with Manchin’s staunch adherence to upholding the damage Republicans have done by defending the filibuster, which he believes is ultimately doing great harm:

[Manchin is] obsessed with having bipartisan legislation in the Senate—obsessed with it, right? He talks about it all the time. There was not one Republican in any of these states around the country that are passing voter suppression laws that worried for a second that restricting the rights of people to vote needed bipartisanship, because they knew they couldn’t get it. We are trying to restore the rights of people to vote, which Republicans have made clear they don’t want to do, yet somehow he thinks he’s going to get Republicans to join on?

“What Republicans care about allowing people to protect the right to vote? There aren’t any. This Republican Party doesn’t exist anymore,” he added.

McCarter called out Manchin’s “hubris, arrogance, and ignorance” in his newfound role as a Democrat who could block legislation, noting that he could serve as a roadblock to Biden’s entire agenda going forward.

She urged Democratic leadership to abandon the commitment to bipartisanship for the sake of the American people:

You don’t need to play this game anymore. It’s important for the American people to see what’s actually happening here—the Republicans are again blocking this. And it’s important for you to say that. To not keep playing this game thinking that everybody cares about bipartisanship, that the public is out here pleading, dreaming of a bipartisan Senate … it’s just insane to keep playing this game and to not call Republicans out when they do this. For one thing, that makes the national media … repeat those words, ‘Republicans are obstructing,’ ‘Republicans don’t want you to have anything nice.’

The pair then turned to discuss infrastructure, a crucial issue as many of America’s roads and public are falling apart or in need of repair. “During the Trump years, roads were collapsing. The infrastructure in the country is a mess … broadband—look at much of rural America,” Sudbay added. “It’s completely broken.” Biden has signaled his willingness to get the infrastructure plan passed without Republican cooperation, something McCarter and Sudbay celebrate because they have feared a repeat of the Obama years when attempts at bipartisanship were blocked at every turn by Mitch McConnell and resulted in Democrats taking hits for every legislative failure.

You can listen to the full audio here: