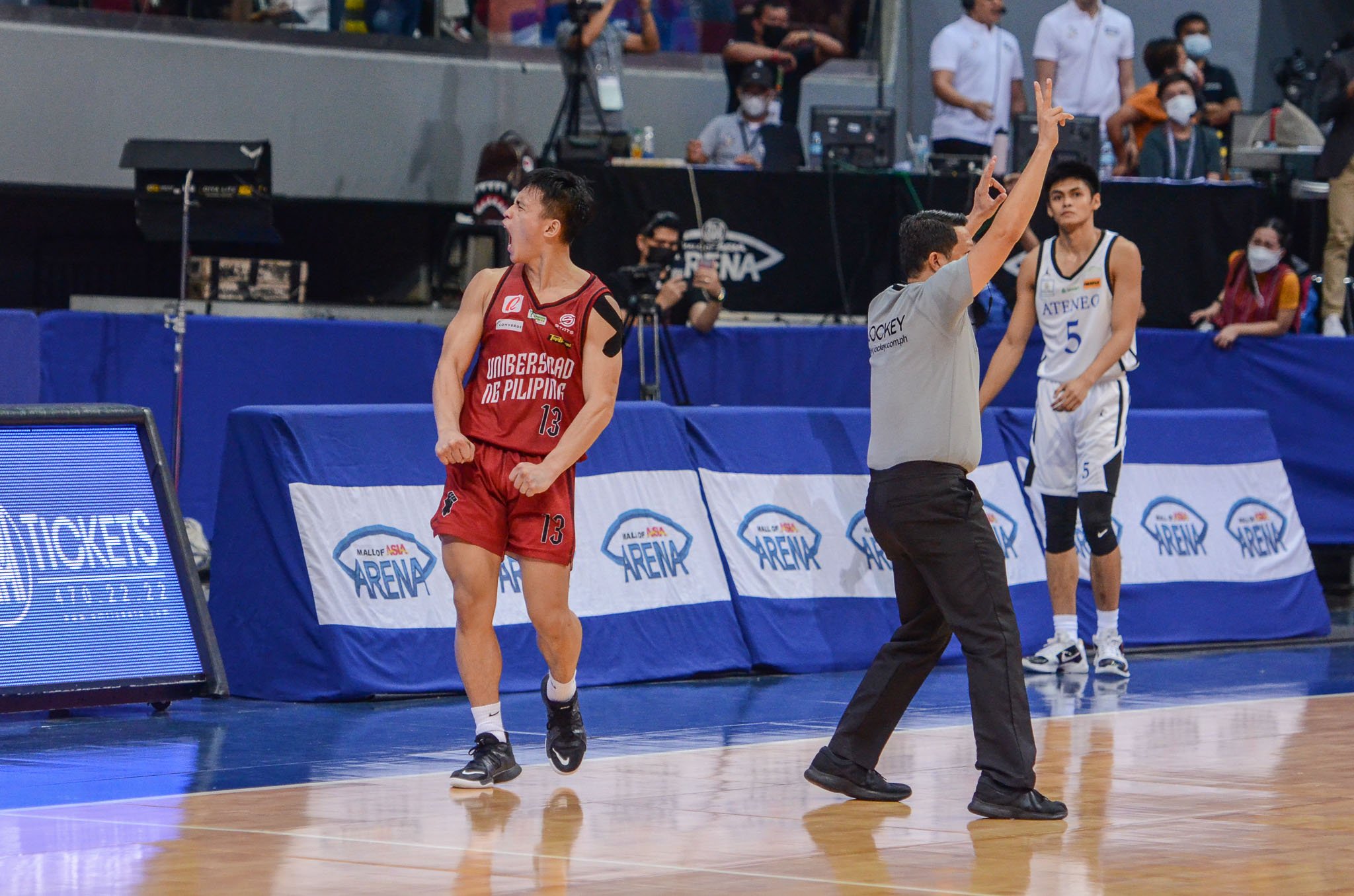 JD Cagulangan celebrates after his game-winning three that lifted UP to the UAAP championship. UAAP PHOTO

It was nearly five years ago when Desiderio told UP in its final timeout, “Atin ito. Papasok ito (this game is our, this shot will go in)” as it trailedUniversity of Santo Tomas 71-73 with 5.3 seconds remaining in the UAAP Season 80 opener last September 10, 2017.

The Cebuano shooter kept his word and nailed the game-winning triple with 1.4 seconds left to escape UST, 74-73. Since then, the phrase “Atin to” became the Fighting Maroons’ battlecry.

On Friday the 13th, Cagulangan lived up to Desiderio’s words to help UP win its first UAAP crown since 1986 with an epic 72-69 victory in overtime at Mall of Asia Arena.

The smallest man on the court, who showed the biggest heart, may have hit the biggest shot in the history of UP’s basketball program, but he credited their confidence in the endgame from the immortalized phrase of Desiderio.

[Paul Desiderio is different. We can feel his impact every game. Every crucial (part of the game) we always say ‘Atin ‘to!’ He is UP’s hero. Nobody can replace that, he made a huge impact.] 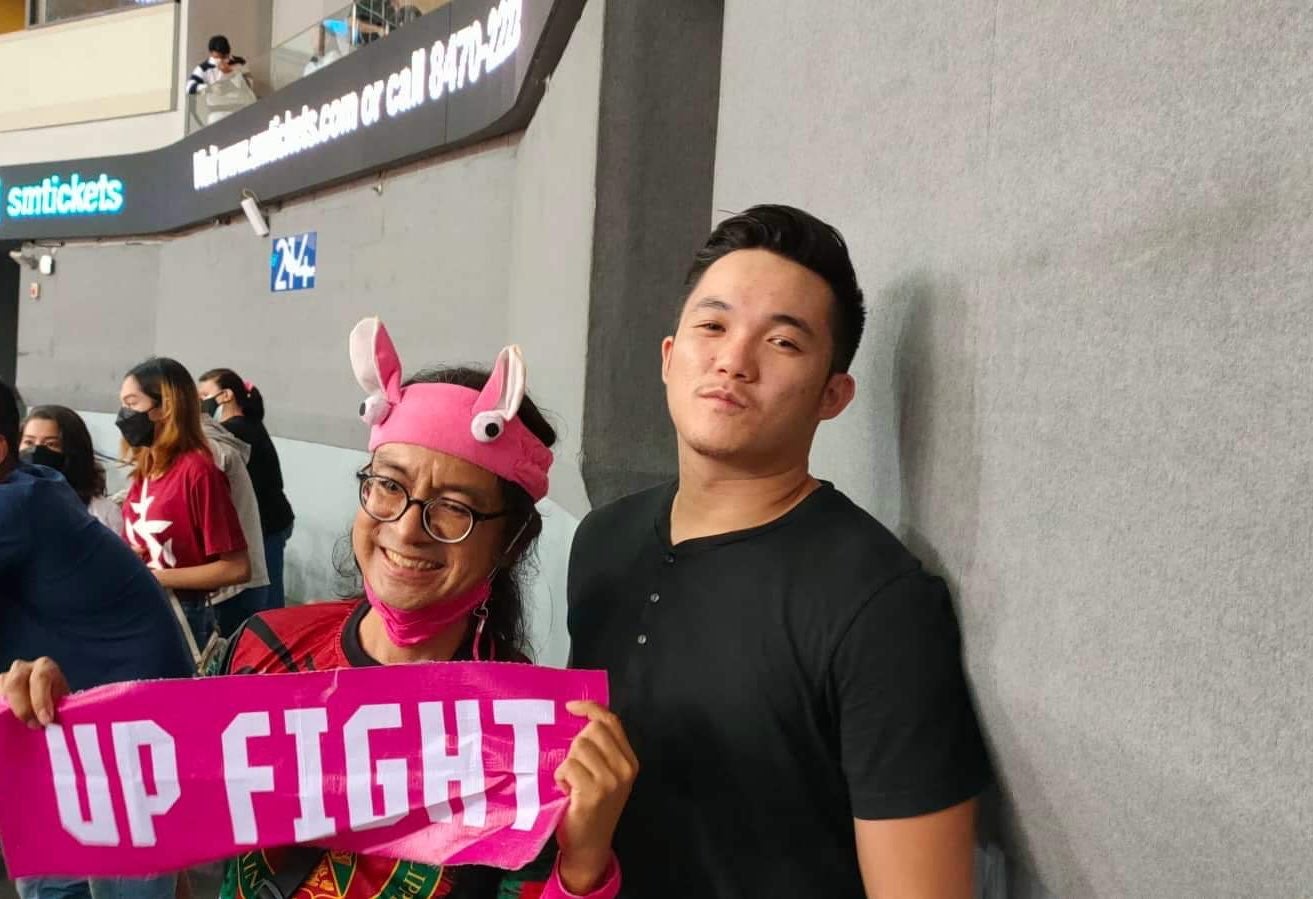 Desiderio, who was part of a roaring Maroons side of the 15,132-strong crowd yelling: ‘Atin ‘to.’ at the lower box of MOA Arena, admitted Cagulangan’s shot was simply  better than his.

“Mas magaling kaysa sa akin. Mas maganda pa. Champion agad,” said the former UP skipper, who led the team to a Finals appearance in 2018 but got swept by Ateneo led by Thirdy Ravena.

[His (game-winning) shot was better and more iconic than mine. He won the championship for the school.]

[I think I’m the happiest man on earth right now. I’m thankful to the sponsors and the community who never stop supporting the team to finally have a winning culture. I’m so happy and I can’t believe it. We used to have nothing but now UP is a champion.]

After Desiderio’s batch turned UP from being the whipping boys of the UAAP into finals contenders, he’s glad that Cagulangan, Diouf, Carl Tamayo, CJ Cansino and this amazing 2022 Maroons team have emerged as champions in coach Goldwin Monteverde’s first season.

“These young guys really deserved it. Although they didn’t have much experience (in college), they won a championship,” said the PBA cager of Blackwater. “They had a great chemistry and they really showed their willingness to win for UP, our alma mater.”

Desiderio is extremely proud of how ‘Atin ‘to’ helped UP in reaching greater heights. Thanks to his rare encounter with Cagulangan, whom he advised not to give up in crucial games whatever happens.

[When I met kuya Paul once. He told me: Don’t give up in close games. Whatever happens, keep on fighting because the UP community is there to support you.]

That brief moment of Cagulangan with Desiderio seemed like a passing of the torch from one hero to another. And the rest is history for the Fighting Maroons.