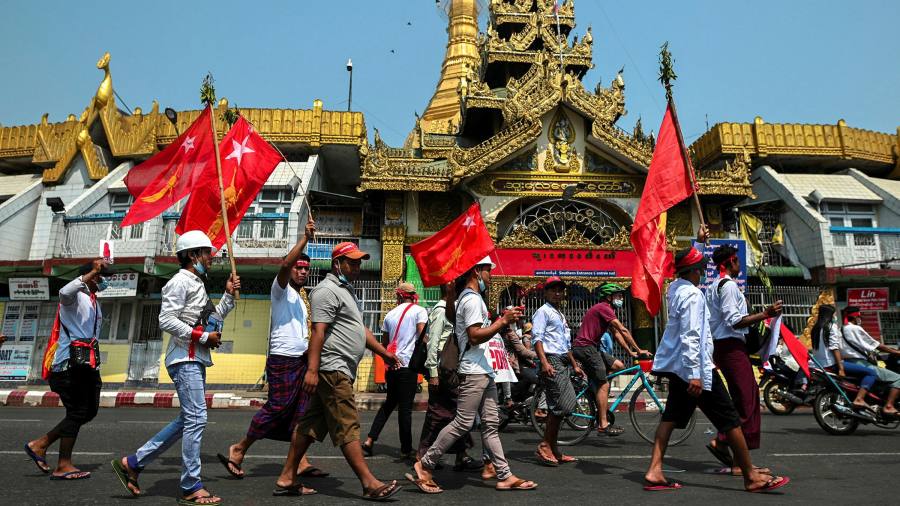 The conclusion, reached at an emergency meeting, was swift and unanimous. “It was no longer tenable. I had to make a decision fast,” said Yoshinori Isozaki, chief executive of Kirin, one of Myanmar’s largest foreign investors.

With huge crowds of protesters on the streets and Myanmar’s future in question, the coup has presented a moral and practical crisis to the hundreds of Japanese companies that have invested nearly $2bn since the country’s democratic transition began in 2011, hoping to capture growth from one of the last frontier markets in Asia.

According to multiple executives and experts, however, Kirin had to act because its business had direct ties to the Tatmadaw, Myanmar’s military, which has been censured domestically and internationally for nullifying a democratic election.

But for most other Japanese companies in Myanmar, it is business as usual — to the extent that is possible while tens of thousands of civil servants, transport workers, medical staff and others protest against the military.

Japanese companies have invested years and a lot of money. They will not just go home

“While keeping a close eye on the situation and hoping for a rapid resolution, many Japanese companies are staying calm and carrying on with their operations,” said Kazufumi Tanaka, managing director of the Japan External Trade Organization’s office in Yangon.

About 70 per cent of Japanese companies in the Thilawa Special Economic Zone are back in operation, said Tanaka, including all of the garment manufacturers that had flocked there in search of low labour costs. Foreign investors, including from Japan, are mindful of not being seen to abandon local workers at a time of national crisis.

Foreign direct investment is a vital source of growth for Myanmar, one of Asia’s poorest countries and Japan is a big partner, with official loans from Tokyo to Yangon reaching ¥1tn ($9.5bn) over the past decade.

Having maintained links with Myanmar through the previous period of military rule despite pressure from Washington to distance itself, Japan has also been more reserved than western countries in condemning the February 1 coup.

Tokyo seldom criticises other Asian countries on matters of governance or human rights and has long seen its economic presence in Myanmar as a counterweight to China, the country’s neighbour and its biggest trading partner.

Unlike the many Japanese companies that have set up local factories, Kirin acquired a 55 per cent stake in Myanmar Brewery, the country’s top beer producer, for $560m in 2015 and later spent $4.3m for a majority stake in Mandalay Brewery. The partner in both joint ventures is the military controlled Myanma Economic Holdings Public Company (MEHL).

Even before the coup, the Japanese group was under intense pressure from activists to review its operations in Myanmar after an investigation failed to uncover where proceeds from the beer ventures ended up. The Myanmar military has been accused of crimes against humanity for committing atrocities against Rohingya Muslims and other minorities.

Kirin has stressed that it was not pulling out of Myanmar and is looking for a local, non-military partner to buy MEHL’s stake. But analysts said it was unclear whether the military was willing to let go of its lucrative beer business.

By contrast, many other Japanese investors in Myanmar have no links with the military, and having invested in offices, factories or power plants, intend to keep operating.

Japanese investors in the country include big trading houses such as Sumitomo, which is involved in power, logistics and telecoms; carmakers Toyota and Suzuki, which have built local factories; as well as property developers, food producers and garment manufacturers. Daiwa Securities played a central role in creating the Yangon Stock Exchange.

According to people close to one of Japan’s largest trading houses, news of the coup triggered an emergency meeting of senior management. The tone, said one person involved, was one of alarm and a fear that a return to international sanctions would sharply reverse the country’s economic gains of recent years.

“The trading houses are not going to be like Kirin. I don’t think that their decision-making will be the same,” said Thanh Ha Pham, an analyst at Jefferies in Tokyo. “With or without a military government, Myanmar needs this infrastructure and Japanese companies have invested years and a lot of money. They will not just go home, they will stay on.” 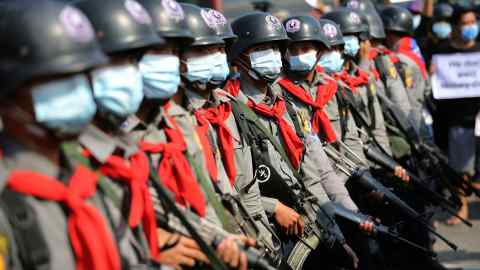 Toyota has invested $53m to set up a vehicle assembly plant in Myanmar, which was due to open this month. The company has already resumed preparations to build Hilux pick-up trucks.

Suzuki Motor, whose history in Myanmar dates back to the late 1990s, said its two assembly plants remained closed to ensure employee safety. Citing strong vehicle demand, the compact carmaker said last year that it would spend another ¥12bn to open a third plant.

The US announced sanctions against the generals who led the coup and three military-linked companies, with other western countries likely to follow suit. But that has no immediate effect on foreign investors and even broader sanctions might be manageable since few Japanese companies export from Myanmar.

“For many Japanese companies it’s about local demand,” said Tanaka of JETRO. “With automobiles or food, it’s aimed at Myanmar’s domestic market in anticipation of future economic growth.”