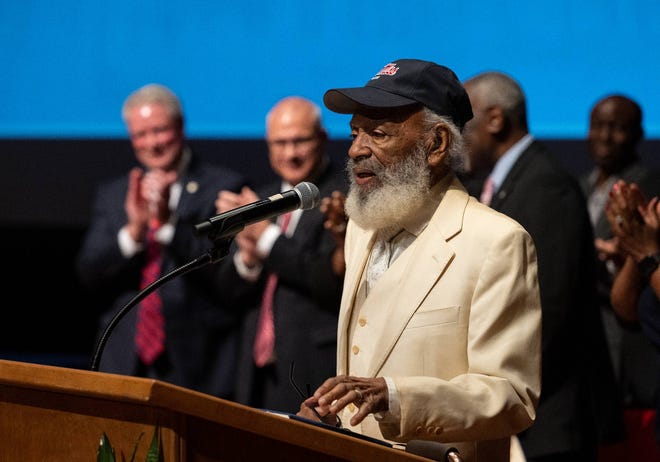 Sixty years after it took an escort of U.S. Marshals just to safely bring him onto campus, James Meredith again returned to Ole Miss, this time standing before a cheering crowd.

The 89-year-old who was the first Black person to enroll at the University of Mississippi received a number of awards from the assembled guests, and also spoke to the crowd about his life and his life’s final mission: to spread Christian teachings through a “James Meredith Museum and Bible Society.”

The event began with an excerpt from the documentary “Who Is James Meredith?” which was directed and narrated by Meredith’s wife, Judy Meredith, a former television and radio journalist.

After the documentary, University of Mississippi Chancellor Glenn Boyce welcomed the Meredith family, and other guests, to the university. Attending in the audience were dozens of current members of the U.S. Marshals Service, one of the Marshals who protected Meredith 60 years earlier, Kosciusko Mayor Tim Kyle, Gayle Wicker, wife of Sen. Roger Wicker, and Kathleen Kennedy Townsend, daughter of Robert Kennedy. As attorney general at the time of Meredith’s enrollment, Robert Kennedy was heavily involved in negotiations with then-Gov. Ross Barnett.

The notable dignitaries, students and members of the university community looked on as Meredith spoke about his goals for a Bible society in Jackson, which he has compared to “the old Catholic mission” meets “the YMCA or YWCA.” Meredith said he’s been “begging for support for many years,” but only three people had made a pledge to donate. Then, he came to Oxford to mark the anniversary, where he’s already received a number of donations. He pulled out a journal, where he has been writing down the pledges he received.

“I’ll be in Oxford six days, and I want to fill this book with pledges,” Meredith said, handing it down to the crowd for it to be passed around. “If we don’t start talking about the Bible and moral character, we in deep trouble.”

Photo gallery:James Meredith has worked out of his small home office for 40 years.

Meredith is seeking $1 for every person in Mississippi “who remembers Ole Miss in 1962.”

Meredith also told the audience a number of “truths” that he said he’d been scared to tell until recently.

“Like everybody, I wanted people to like old James Meredith, and most people don’t like it when you tell them the truth,” Meredith said. “After watching that movie, that they say my wife had made, and I decided that being scared, particularly of highfalutin people, didn’t make good sense.”

One truth that got a considerable cheer from the crowd was Meredith’s view that Black women, particularly those over the age of 30, are the most important people in the world.

Meredith received a number of awards and honors from the university he fought so hard to attend and ultimately graduate from.

Ronald Davis, director of the U.S. Marshals Service, honorarily deputized Meredith into the nation’s oldest law enforcement agency, the very one that had protected him decades earlier. Davis said his staff struggled to find any other time someone had been bestowed with that honor.

“When we look at this award that we are going to present, it is probably the greatest honor of my tenure as director of the U.S. Marshals Service,” Davis said.

Boyce awarded Meredith with the Mississippi Humanitarian Award. Boyce said the award is one of the university’s highest honors, and it has only been given out four times in the last 20 years. Prior to that, Boyce said they do not know if it was ever given.

“We have a monetary gift along with this award, for your James Meredith Bible Society. It’s a little bit more than $1, I can assure you,” Boyce said.

The City of Oxford, represented by Ward Four Alderman Kesha Howell-Atkinson, also presented Meredith with a resolution, making Oct. 1, the date he enrolled in 1962, as James Meredith Day.

A number of other awards were also presented to Meredith. The College of Liberal Arts is creating a “James Meredith Changemaker Award,” which will be given out annually in the spring to a graduating undergraduate student. The university is creating a James Meredith Speaker Series that will occur each year to mark the anniversary. The university will also award a James H. Meredith Legacy Award each year, and a James H. Meredith Legacy Scholarship.

After the event, Meredith said there is much still to be done at Ole Miss and across the nation.

“It’s time for us to stop lying and start dealing with the truth,” Meredith said. “America ain’t automatically here to stay. We’ve got to do some right things.”

Meredith’s strategy for spreading the truth has always been through personal politics. He said for decades he has gone to Ole Miss football games and walked around campus talking to people, telling them his stories and his truths.

“I was getting into the mind of the people that thought they hated me,” Meredith said.

He has always seen a part of his mission as converting people “from bad people into good people,” including while he was a student.

“I thought that everybody at Ole Miss that was screaming at me, I thought I hadn’t done my job yet,” Meredith said.