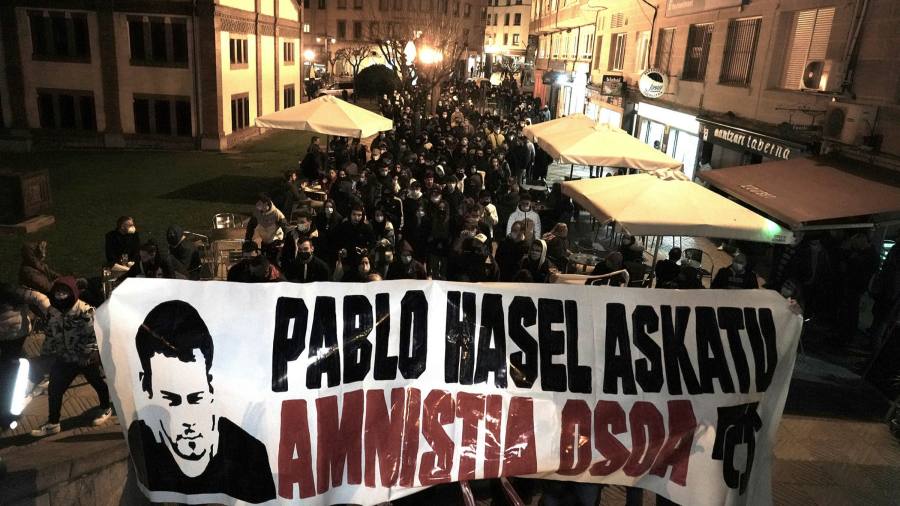 The crowd of several hundred who gathered at the Puerta del Sol to protest at the jailing of rap artist Pablo Hasél took lyrical inspiration from an earlier era, chanting the Spanish Civil War slogan “Madrid will be the tomb of fascism” as the police looked on.

“The younger generations are pushing hard and this protest is to say: ‘There’s been enough of this repression, this corruption, this system that doesn’t provide a space for us’,” said Rubén Lázaro, 28, a set builder who was one of those in the Madrid square on Wednesday evening, with similar demonstrations taking place in Barcelona and other Spanish cities.

Acrid smoke had hung over Barcelona, the Catalan capital, this week as protesters set fire to rubbish bins in three nights of clashes with police. Dozens of people were detained in Madrid and Catalonia and a Barcelona teenager lost an eye in the clashes.

Their anger was directed at what they considered the harsh sentence handed to Hasél for social media posts glorifying terrorists and accusing Spanish police of murder, as well as a biting rap about former king Juan Carlos I that suggested half the country wanted him dead. Hasél had previously received a suspended sentence related to violent lyrics that called for the deaths of a number of Spanish politicians.

The treatment of Hasél, whose real name is Pablo Rivadulla Duró, has fuelled anger among a generation of young Spaniards who are already weary from high unemployment, low pay, corruption and restrictions on movement that were meant to end one of Europe’s worst coronavirus outbreaks.

[The penal code] has to be modernised with a basis in current societal consensus. It’s impossible to contain opinion these days

He is not the first person in Spain to be charged with defaming either the monarchy or the police, or glorifying terrorism, under the country’s penal code articles. An actor stood trial for insulting religion in a 2017 Facebook post (he was acquitted in 2020) and two puppeteers spent five days in jail over the content of a marionette show in 2016. Another rapper, Josep Miquel Arenas, known as Valtònyc, moved to Brussels to avoid a prison sentence.

Some say the calls to violence in Hasél’s lyrics make him a poor poster child for free speech, but his internment has sparked soul-searching over Spain’s commitment to free expression, and the need to continue the transition to democracy that began with the 1975 death of dictator Francisco Franco.

Such questions are especially pointed in Catalonia, home to Hasél and where separatist politicians use Spain’s supposed lack of democracy as a justification for secession.

“[The penal code] has to be modernised with a basis in current societal consensus. It’s impossible to contain opinion these days,” said Gutmaro Gómez Bravo, professor of contemporary Spanish history at Madrid’s Complutense University.

The existence of laws against defaming the monarchy have their origins in the era of Franco, who came to power in a coup and led the country from 1939 until his death. He re-established the monarchy in 1947, with himself in charge, and named Juan Carlos I his successor in 1969.

But in the eyes of some, this “original sin” hurt the monarchy’s legitimacy and led the architects of Spain’s transition to add special protections for royalty “in the face of a possible lack of public support”, said Gómez Bravo.

Mercedes Cabrera Calvo-Sotelo, a Complutense professor and former education minister, said such constitutional protection did not have the justification that it may have had at the time. “Criticising the monarchy forms part of the freedom of expression,” she said. “The institutions of the Spanish democracy are strong enough to withstand critical opinions.”

Similarly, Spain’s terrorism speech laws were drawn up at a time when police and soldiers were regularly being targeted and killed by ETA, the Basque separatist group.

“[That law] could have made some sense in the hardest days of ETA. But right now, it makes no sense,” said Juan Alberto Díaz López, a criminal law professor at Madrid’s Autonomous University.

Díaz believes eliminating defamatory speech protections for the monarchy would go some way towards tackling the inequalities that so anger the young protesters: “Is the honour of the crown and [reigning monarch] Felipe VI higher than others?” he asked.

Eliminating jail sentences for speech-based crimes in general would also move the Spanish more in step with European norms, he added.

Spain’s justice ministry last month proposed a review of crimes related to “excesses of freedom of expression” to punish only those who presented clear dangers, and then only with fines, not jail time.

On Friday, following a third night of protests in Barcelona, prime minister Pedro Sánchez said that while increasing legal protections on free expression was a pending task, his government “opposed all forms of violence” because it represented the “denial of democracy itself”.

Law changes are unlikely to help Hasél. His nine-month sentence, reduced from two years, was not suspended because he had previously been convicted and given a suspended sentence on similar charges, in part for lyrics suggesting violent acts against Spanish politicians.

On Thursday, a regional court in Lleida upheld a separate two-and-a-half-year sentence against Hasél for obstruction of justice and threatening a witness.

At the Puerta del Sol protest, however, the focus was on broader principles.

“I’m here because of the injustice,” said Marta Pérez, 29, a social worker who admitted she was not familiar with Hasél’s music. “Under pressure from the far-right, Spain’s political forces are moving towards censorship.”