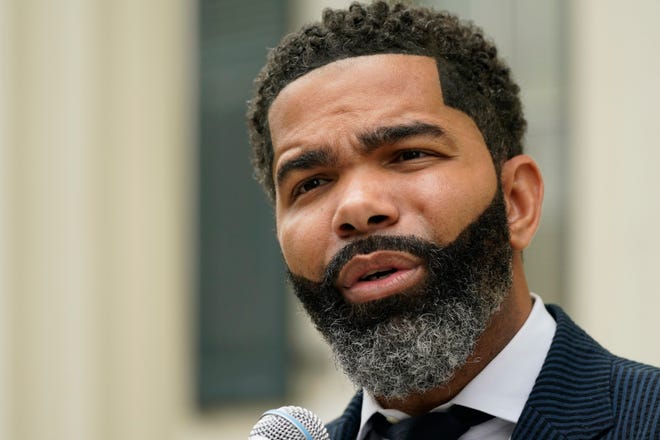 “Don’t trust the state.” That, in essence, was the message of Jackson Mayor Chokwe Antar Lumumba Tuesday night as he laid out objections to allowing the city’s water and sewer administration being taken over by a state, regional, or private entity.

Lumumba was speaking to a relatively small but engaged crowd of about 50 people gathered at New Jerusalem Church on Raymond Road in South Jackson.

While the meeting was called specifically to provide updates on the city’s water crisis, questions and topics veered into multiple concerns.

Among them: the city’s garbage collection contract dispute; priorities of the 1% sales tax commission; efforts by the state to assume control of the Jackson-Medgar Wiley Evers International Airport; conditions at the Jackson Zoo; and the accountability of Capitol Police officers operating within the city’s Capital Complex Improvement District.

“I recognize the unique location we are at. South Jackson has inequitably suffered from these (water) challenges more than any other part of the city,” Lumumba said in his opening remarks.

He asked that citizens “not be hoodwinked or misled into believing your city doesn’t have a plan,” citing what he said was a $200 million plan commissioned by his administration.

“It’s not the lack of a plan, it’s the lack of priority,” Lumumba insisted, adding that he feels there are legitimate questions over whether the state government provides equal protection to those in Jackson compared to other cities and towns.

He also said that while water pressure has been stabilized, the public shouldn’t assume the problem is over. “We have restored pressure before,” he said.

But other problems, including many leaks in the water distribution system remain. Lumumba acknowledged that attention by the national press to Jackson’s water problems has prompted other cities to “offer their best and brightest” to come to Jackson’s aid. But he cautioned that will only last so long.

“Once it is no longer in the news that is when I become fearful,” Lumumba said.

Conversely. Lumumba didn’t shy away from also criticizing the media, in particular television stations for running an oft-repeated clips of what appears to be very dark, muddy water coming from a sink.

The dark water was likely a localized problem and not representative of water being treated at Jackson two primary water plants, he said.

Responding to charges by Gov. Tate Reeves and others that the city’s water problems have resulted from mismanagement, Lumumba said the city’s O.B. Curtis water treatment plant near the spillway of the reservoir is among the most complicated plants of its type. He said the smaller 100-year old Fewell plant near Belhaven has proven to be much more reliable and didn’t rule out the prospect of building a new water treatment facility.

Lumumba also characterized attempts to tie acquisition of the city-owned airport by the state to more state funds from the Legislature as an attempt at “extortion.”

He said that Lt. Gov. Delbert Hosemann had told him the state wasn’t likely to do much to help Jackson unless the city was willing to accept $40 million in exchange for the airport.

Rev. Dwayne Pickett, the pastor of New Jerusalem Church where the meeting was held, raised concerns over a shooting by Capitol Police that occurred Sunday night, Sept. 25, in which he said a personal acquaintance of his was killed.

Media reports have stated the Mississippi Bureau of Investigation is looking into the shooting which happened around 9 p.m. near Mayes Street and West Street. Multiple units from Capitol Police as well as the Mississippi Highway Patrol responded to the scene.

Pickett, however, identified the person shot as Jaylon Lewis, a recent high school graduate. He said Lewis was shot while sitting in his car.

“They blew his brains out,” Pickett told the congregation, adding this was the “third or fourth” person shot by Capitol Police in recent weeks.

He also expressed little confidence for a fair investigation by the MBI since both agencies are controlled by the State of Mississippi.

He acknowledged that the Jackson Police Department “isn’t perfect either,” but questioned whether the Capitol Police have proper accountability.

“People you haven’t elected are making decisions on your quality of life,” Lumumba said.

Lumumba was less critical of federal officials from the U.S. Department of Justice and the Environmental Protection Agency, which this week threatened to take legal action against the city over violations of the Safe Drinking Water Act.

Lumumba said he trusts the good intentions of EPA Director Michael Regan and that he looks forward to entering into what the Justice Department calls a “judicially enforceable agreement” to avoid litigation.

Creative fast-food hacks on a budget