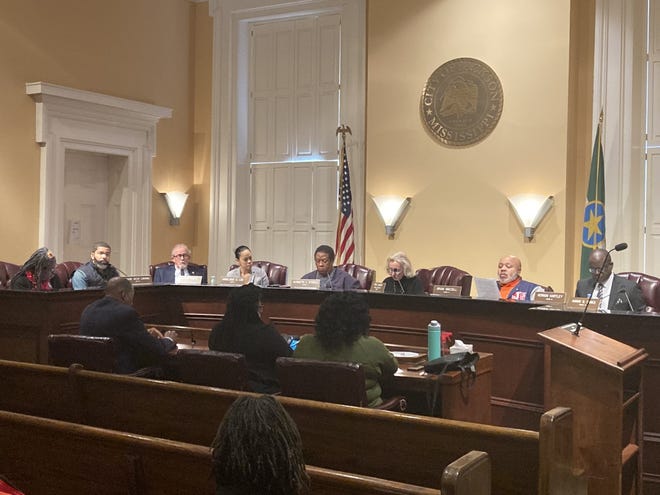 The resolution, introduced by Ward 7 Councilwoman Virgi Lindsay, calls on the administration to engage the company “within the confines of the law and as expediently as possible” to assist with operations of the O. B. Curtis and Fewell water plants.

Some council members, citing the emergency nature of the situation, argued the resolution isn’t enough.

Ward 3 Councilman Kenneth Stokes proposed that members should adopt an order that would privatize the city’s water department. Citing a letter signed by 46 restaurant owners detailing how boil water notices have hurt Jackson businesses, Stokes said it was time to take a stronger stand.

“A resolution will not carry any weight — we need an order that will carry some weight. People need to know we are serious about this,” Stokes said.

Lumumba said he is open to finding a company to partner with the city. A similar agreement already exists between the city and a management team at the Savannah Wastewater Treatment Plant, he noted. But Lumumba said he would oppose any plans to privatize the system, which, he argued, would affect the city’s poor residents disproportionately.

“We would lose control over our rate structure,” Lumumba said.

The mayor said the current water crisis is an issue “this administration works on every day.”

Assistance is currently coming from the U.S. Water Alliance through a grant provided by the Kellogg Foundation, he said.

“Privatization should be your last resort,” Lumumba insisted.

Council President Ashby Foote of Ward 1 agreed that complete privatization could lead to some “unintended consequences,” but he said he fully supports the idea of a management company.

“It would be unfair to the administration to issue an order without giving them the opportunity to respond to a resolution first,” added Ward 6 Councilman Aaron Banks.

Noting that low water pressure has delayed the opening of classes at Jackson State University, he said the city appears to be running out of options.

“We’ve got to do something drastic here,” Hartley said.

Stokes, sensing that an order for privatization was unlikely to pass, said he was agreeable to amending his order to call for a management company agreement instead.

But that vote failed on a 3-3 tie with one abstention.

Reacting to Tuesday’s vote, state Sen. John Horhn of District 26 offered his support for the resolution: “Today the Jackson City Council took a positive step forward by passing a resolution requesting that the mayor engage a third-party administrator to manage the City’s drinking water system,” Horhn said in a statement.

He further encouraged the city “to explore engaging an expert partner in helping to provide a long-term solution to our wastewater issues as well, and the overall operations of our entire water/sewer administration. These actions will greatly assist Jackson legislators in procuring much-needed resources from the state to help address the Capital City’s infrastructure issues.”

In other city council news:

On a recommendation by Mayor Lumumba, council members voted unanimously to appoint Warren Herring as a new member of the Jackson Municipal Airport Authority Board. Herring is the owner and CEO of Trustcare, a group of 15 medical clinics throughout two states. “He has the ability to bring a strong business acumen to the airport’s operations,” Lumumba said.

Man dead after jumping from Mississippi bridge amid police chase