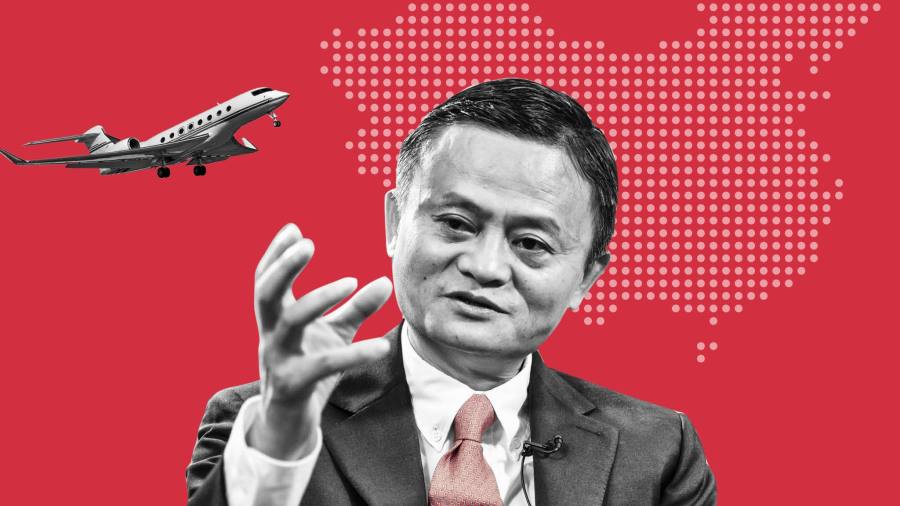 Jack Ma has made only one public appearance since upsetting the Chinese government last October in an incendiary speech that led to the suspension of Ant Group’s record $37bn initial public offering.

But the Financial Times has obtained the flight details of his private jet that suggest that while the 56-year-old founder of China’s largest fintech company is down, he is far from out.

The flight logs, compiled with data from Radarbox, a flight-tracking company, also dispel rumours that he has fled China to Singapore or been put under house arrest. Instead, they suggest that Ma continues to have access to his Gulfstream jet, which has a range that could easily carry him as far as New York or London.

The crackdown by the government of President Xi Jinping on the normally high-profile Ma follows concerns in Beijing that Ant’s activities were increasing the risk levels in China’s financial system.

Ma’s Gulfstream sits at a private terminal in Hangzhou, the headquarters of the companies he founded, Alibaba and Ant Group. The jet identified by the FT had a travel schedule that matched more than a dozen of the public appearances that Ma made in the three months before he ran into trouble with the authorities.

The records of no other private jet registered in China, or in the Cayman Islands, a popular spot for Chinese billionaires to register their aircraft, have the same itinerary, according to Radarbox data.

The flight logs show a dramatic slowdown in Ma’s busy schedule after he started lying low. Before October, Ma was travelling once every three days, on average. In January and February he was only travelling about once a week, mainly to Beijing and to the tropical island resort of Hainan, where Bloomberg has reported he was spotted playing golf.

Nevertheless, it appears that when Chinese regulators have wanted to talk about Ant, it was Ma who flew to Beijing. He is the controlling shareholder of the payments group but holds no formal position.

People close to Ant and Alibaba and regulators in Beijing confirmed that he has been directly involved in negotiations over Ant’s future. One person close to the regulators complained that Ma was still going over their heads to plead his case with top Communist party leaders. A friend of Ma’s agreed. “He still has the ability to reach the very top,” the person said.

The records show intense activity around Ma’s controversial October speech in Shanghai, in which he criticised state-owned banks and regulators. The day after he made the comments, his jet flew to Beijing for a four-day stay.

A few days later, at 9pm on November 1, Ma flew to Beijing again from his home city of Hangzhou. Chinese regulators announced soon after that they had called him in for a grilling and that Ant would be faced with new regulations that effectively torpedoed its IPO. Ma’s jet sat parked in Beijing for two weeks.

His next flight to the capital came on Christmas Day, after China’s financial regulators publicly summoned Ant Group for a second discussion on “financial supervision, fair competition and consumer protection”.

At the end of January, his jet was back in Beijing as Ant and regulators hashed out a restructuring plan that has been agreed to but not yet publicly announced.

On Friday, Ant Group issued “self-discipline rules for fintech platforms”, emphasising it would improve credit risk controls and work to prevent funds from flowing into the housing and stock markets, in the latest move to fall in line with Beijing’s efforts to control credit risks.

By contrast, the flight data before October paints a picture of a billionaire who criss-crossed China to collect awards and hobnob with local officials.

In late August, Ma’s plane flew to Beijing where he received an award from the Jordanian government for his help combating Covid-19. “Viruses don’t have a passport, nor do they need visas,” Ma told the crowd of diplomats in the country’s embassy. A few days later he was in the air again, on his way to Kunming where he opened a new campus for his business school.

He and his plane were then seen in the lakeside town of Dali, before returning to Hangzhou for another speech to open the school year.

On September 9, Ma landed in Chongqing where he ate kebabs on sticks and drank beer late into the night. Next he flew to Changsha and Fuzhou for meetings with local officials before treating himself to reganmian, the famous hot, dry noodles in Wuhan. He capped the month off with a speech in Haikou.

“My judgment on the future: it’ll be difficult in the short-term, even more difficult in the medium-term, but long-term it’ll be good,” Ma told the crowd of businessmen. “Now is the turbulent period when the plane passes through the clouds, so everyone must hold the steering wheel and fasten their seat belts.”