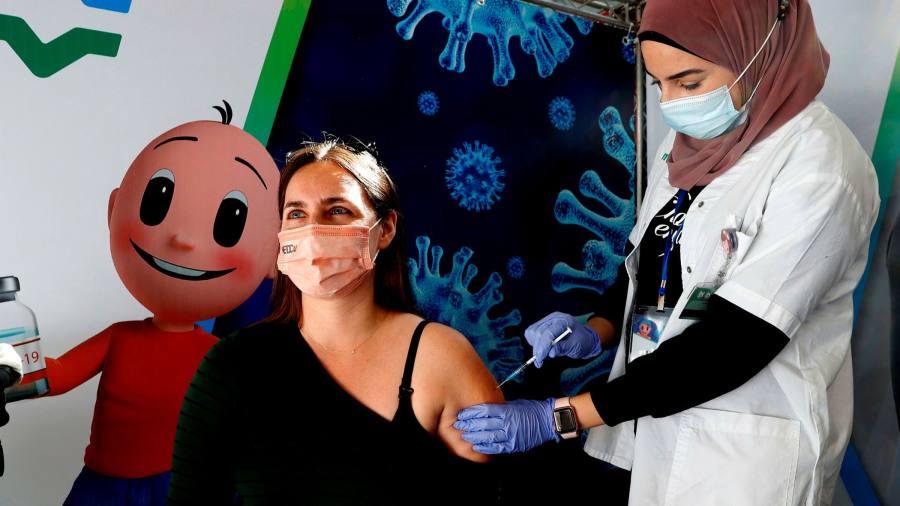 Cases and hospital admissions in Israel are falling steeply among vaccinated age groups in the first clear sign worldwide that Covid-19 jabs are preventing illness following a mass inoculation campaign.

Daily case rates among people aged 60 and above have fallen by 46 per cent relative to their mid-January peak, compared with a much smaller decline of 18 per cent among under-60s, according to analysis by a team from the Weizmann Institute of Science at Tel Aviv University.

The country has been in a lockdown since 8 January that initially pushed cases down across all ages at a similar rate, but the striking divergence in trajectory between the older citizens — who have received the jabs — and younger people has opened up in the wake of the world’s fastest vaccine rollout. The country has so far administered over 57 doses per 100 residents.

Eighty per cent of Israelis aged 60 and above had received at least their first dose of the BioNTech/Pfizer vaccine by 15 January, with mass rollout of the second dose beginning around the same time. As of 4 February, 78 per cent of this group have now received two doses.

Hospital admissions of those aged 60 and above have already dropped 34 per cent below mid-January levels, while admissions among younger adults had remained flat and are now slightly higher than they were three weeks ago.

Similar patterns are apparent in both moderate and severe hospital cases, suggesting that the vaccine is protecting against not only mild illness but also severe disease.

Vaccine makers including BioNTech/Pfizer have created their products primarily to prevent disease in people infected with coronavirus. But preliminary evidence suggests the vaccines also reduce transmission of the virus.

When cases first began to fall in Israel in the second half of January, it was initially unclear whether the cause was the vaccine or the national lockdown, but as more data has come through, more and more evidence points to the role of inoculations.

“The effect is stronger [among older people] than in the younger populations who were later to vaccinate, and these patterns were not seen in the previous lockdown”, said Professor Eran Segal, leader of the Tel-Aviv team who analysed the data.

All eyes will now be on the UK and US — the two major countries closest behind Israel on vaccine rollout — to see whether similar patterns emerge there. UK results will be key to assessing the efficacy of vaccination campaigns due to the high prevalence of the B.1.1.7 variant of the virus, a mutation which may present challenges to some vaccines and makes up 80 per cent of new cases in Israel.

“The [Israeli] results are convincing and give us a lot of hope”, said Akiko Iwasaki, professor of immunobiology at Yale School of Medicine. “It is remarkable that within a month and a half, Israel was able to vaccinate 78 per cent of those over 60 years of age. This is what a co-ordinated vaccination campaign can achieve.”

Israel’s national-level figures were published on the same day as new data from Maccabi Healthcare Services, one of the largest healthcare providers in the country, which showed that a week after receiving the second dose of the Pfizer vaccine, only 254 people out of 416,900 had been infected with Covid-19.

Maccabi reported that all 254 infected patients suffered only mild symptoms, and only four of them were hospitalised in moderate condition. This compared to an unvaccinated control group where 12,944 out of 778,000 tested positive for coronavirus.

According to the comparison between the two groups, the efficacy of the vaccine is currently estimated at 91 per cent seven or more days after receiving the second dose.

“The data clearly indicates that as the days go by from the second dose, our immune system defence abilities become stronger,” said Dr Anat Ekka-Zohar, director of the Division of Data & Digital Health at Maccabi Healthcare Services.

“Additionally, our data has proven that those patients who do contract the Covid-19 virus post vaccination have a milder course of disease.”

Israel’s vaccination rate has dropped in recent days, however, as supplies of the Pfizer vaccine have slowed, according to officials at the major healthcare providers, and vaccine scepticism among the younger population becomes apparent.

The number of shots administered dropped from an average of 200,000 a day to just over half that number on several days this week, even as age restrictions were lifted to allow anyone over 16 to seek an appointment.

“What is most important is that all Israeli men and women over 50 be vaccinated,” Prime Minister Benjamin Netanyahu said in a national address this week. “Go be vaccinated. The vaccines work.”

Israel plans to slowly exit its lockdown even before the entire adult population has been offered a shot, betting that it has reached a critical mass of vaccinated citizens that will contain the spread of the B.1.1.7 mutation.