Is This the Largest Western Wear Shop in the World? An Investigation – Texas Monthly 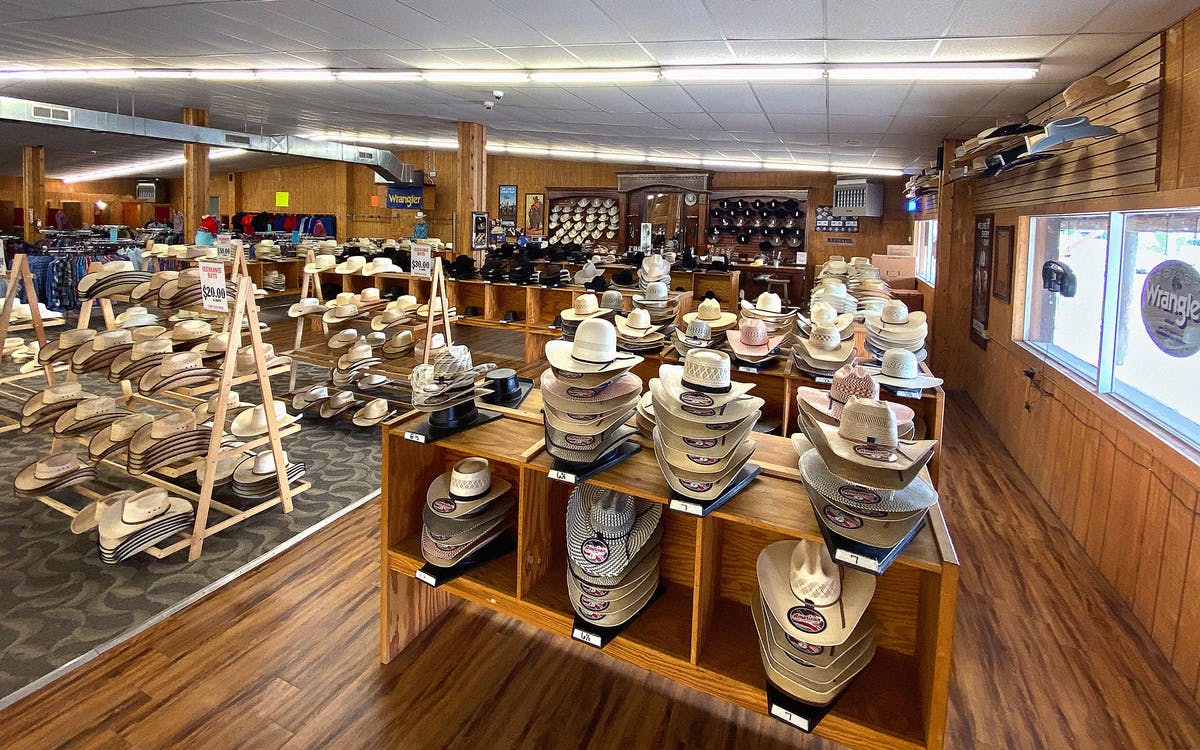 Justin Discount Boots spans two acres. It takes 90,000 square feet to hold all the boots from brands such as Chippewa, Nocona, Tony Lama, and, of course, Justin, sold in various iterations of closeout deals, factory seconds, and first lines. One Justin Discount building is set up like a DSW, with shoes on top of the shelves and boxes underneath. In yet another building, boots hang on pegs on the wall, and there isn’t much inventory in each design, giving the feel of a one-of-a-kind deal. A third building is full of Wranglers stacked for customers to sift through. Stetsons? Yeah, the company’s got those too.

I stumbled onto the Western wear mecca in the summer of 2020, when my husband and I were on a yet another pandemic drive (i.e. play NPR until the kids fall asleep). We crossed Interstate 35 West between Fort Worth and Denton, and a two-lane country road led us to Justin (population 4,409). As I looked around, I noticed a large boot store. When we turned a corner, there was another. And another. Five total. All of the buildings had the same name: Justin Discount Boots. We laughed about how the entire city seemed to be one big shop.

The Justin Discount Boots website boasts that it is the “world’s largest western wear outlet store.” Every time I see a superlative like that, I’m reminded of a journalism saying: “If your mother says she loves you, check it out.” So before I can declare, with authority and in print, that it is indeed the world’s largest, I investigate.

For a store to qualify, I decide it must sell the holy trinity of Western wear: cowboy boots, pearl-snap shirts, and Wranglers. The journey is mostly a virtual one (have you seen the price of gas?). It takes me from Justin, Texas, to a whole ’nother continent, as far away as 1.5 million Justin Discount Bootses laid end to end.

I start with the obvious place to begin when you’re searching for the world’s biggest, longest, or heaviest: The Guinness Book of World Records. My search turns up nothing. The closest entry is “Western hero most often portrayed on screen.”(It’s Buffalo Bill.) But as far as “world’s largest Western wear outlet store,” there’s nothing there.

Next, I find a grainy YouTube video from 1986 that claims that Sheplers Western Wear is the “world’s largest Western store.” A little more digging, and I find out Sheplers was a chain based in Wichita, Kansas, with dozens of stores across the country. The storefronts were rebranded to Boot Barn in 2015, and Sheplers continues to operate as an online outlet. I’m looking for a store with the largest physical presence in one spot, so Sheplers is out. Farther down my search results, Iowa’s Long Creek Outfitters is “one of the largest” Western stores in the country. It’s recently added on to its building, and it’s now about 25,000 square feet. That’s more than half an acre of Western wear, but compared to Justin Discount Boots, Long Creek is all hat and no cattle.

Then I find Kleinschmidt’s Western Store. It’s a German name, so I’m hopeful that this will take the search global. We’re looking for the world’s largest, after all. Kleinschmidt’s is actually a family-owned store in Higginsville, Missouri—but it has Long Creek Outfitters beat. The store occupies 30,000 square feet and has as many boots. Across the pond, I find Wild Wild Western Wear. It’s a small shop in England, but it serves tea and customers come from hours away.

Armed with the info about its largest competitors, I head over to Justin Discount Boots. The main building, with its wood-paneled walls and leather aroma, used to be home to a salvage store. Frank Wallace started the company in 1959 with $2,800 in winnings from a steer-wrestling competition at the 1958 Houston Livestock Show. He’d buy damaged goods from insurance companies and sell them at a discount; in 1985, the local news called Wallace the “salvage king” and Justin the “salvage capital of the world.” The store held caskets, clothing, groceries, and, once, frozen silk flowers that were dried out in a pasture before being put on the shelves. At the time, the shop made $10 million a year.

So they partnered up and added a small Western wear store on the back side of the existing shop. As health concerns mounted, insurance companies weren’t able sell as many damaged goods, especially the smoke-laced groceries that made up part of the elder Wallace’s inventory. “As time went on, salvage got harder and harder to get,” Mark Wallace says. “It was out of our control. Then came the Urban Cowboy era, which was big in Western wear.” John Travolta’s star turn on the honky-tonk floor had turned belt buckles and ostrich-skin boots into a trend. Demand went up significantly, “until eventually the salvage was all gone and the Western wear was all-encompassing,” Wallace says. The salvage store turned into Justin Discount Boots. In 1991, the store expanded to have three connected buildings, with two more across the street. The Wallace family felt comfortable declaring it the largest in the world, and Wallace tells me they’ve never once been challenged.

I ask Wallace about the bold epithet. “World’s largest Western wear outlet store,” he clarifies. The designation means the company sells clothes and shoes that are irregular in some way. An item may have a scratch or be last season’s style. Some boots are there because Justin or another brand only had enough leather to make, say, fifteen boots instead of a full run.

Okay, I say, then do you know of a Western wear store that is larger?

“I’ve never seen one bigger than us,” he says with a laugh.

I can’t find one either. Justin Discount Boots’ location is deceptively rural. The proximity to Fort Worth and I-35 helps draw customers in from all over. The store is less than six miles north of Texas Motor Speedway. Wallace says on a normal summer day, he can walk out into the parking lot and see license plates from a handful of states. The store is quiet when I visit, which he attributes to skyrocketing prices at the gas pumps.

The lack of crowds means I have time to wade through the selection at a leisurely pace. When I first passed the store two years ago, I tucked the name away for the next time I needed new boots. Now, with Garth Brooks concert tickets in hand, my moment has come. I debate between two pairs, but when I see another woman looking at one of them, I snatch those up. They’re calf-hide Tony Lamas. The bottoms are slippery smooth and ready for twirling to “Papa Loved Mama.” The inside is stamped with “IMPERFECT.” I beg to differ.