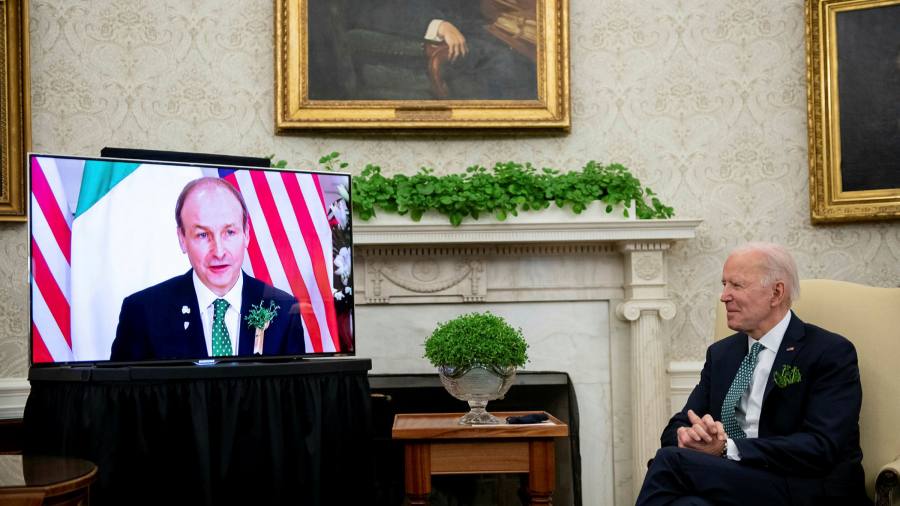 Ireland’s prime minister has told Joe Biden that the UK and EU must “stand by what has been agreed” on post-Brexit rules on trade between Great Britain and Northern Ireland.

Speaking by video link at the annual St Patrick’s Day bilateral meeting between the Irish and American leaders, Micheál Martin said London and Brussels must “move forward with a positive relationship” on the Northern Ireland protocol, which is designed to prevent a hard trade border on the island of Ireland following the UK’s departure from the EU.

The EU this week launched legal action against the UK after the British government took steps to unilaterally ease rules governing trade between Great Britain and Northern Ireland, allegedly in breach of London’s Brexit treaty with the bloc.

US politicians, including Biden, have been insistent that there must be no return to a hard border between the UK and the Irish Republic and that the 1998 Good Friday Agreement, which underpinned a historic peace settlement in Northern Ireland, must be upheld.

On Wednesday Biden touted his Irish heritage and quoted the Irish poet Seamus Heaney. He added: “I’m speaking to you from a White House designed by an Irish hand, and a nation where Irish blood was spilled in a revolution for independence, and for union and freedom through the years. The story of the Irish Americans is the story of people who have weathered hard times, but always come through, spirit intact.”

Once again, the eyes and the interest of the United States can continue to make a difference at a delicate time

Martin said he wanted to thank the US president for his “unwavering support for the Good Friday Agreement”. He added: “It has meant a lot and it has mattered, including as we negotiated Brexit.”

Speaking at a separate St Patrick’s Day event hosted by Speaker of the House of Representatives Nancy Pelosi on Wednesday, Martin said the protocol was “the only way that could be found to manage the unique complexities of Northern Ireland”, while avoiding a return to a hard border on the island.

He urged US lawmakers to continue paying attention to Ireland and speaking out in support of the Good Friday Agreement. “Once again, the eyes and the interest of the United States can continue to make a difference at a delicate time,” Martin said.

Although Biden administration officials have struck a cautious note on the Northern Ireland protocol, US lawmakers on Capitol Hill have been more outspoken.

A senior administration official told reporters on Tuesday evening that the US viewed the dispute as “a trade issue to be resolved between the UK and the EU”. “The administration is interested in having strong relations with both the UK and the EU, and we hope that they’re able to find ways to work well together, particularly ways that are in the interest of political and economic stability for the people of Northern Ireland,” the official said.

But Brendan Boyle, a Democratic Congressman from Philadelphia and member of the Irish caucus on Capitol Hill, said UK prime minister Boris Johnson’s attitude towards the Northern Ireland protocol was “deeply concerning”.

“Obviously this protocol is complex, and it’s a complex situation. It wouldn’t have taken four and a half years to negotiate and conclude if it weren’t complex,” Boyle told the Financial Times. “But we want to see no unilateral action from either side, and we believe there needs to be co-operation between the UK and EU to implement this in good faith.”

Several lawmakers from both parties have also threatened to block a UK trade deal with the US if the Good Friday Agreement is threatened. Most recently, lawmakers including Bob Menendez, the chair of the Senate foreign relations committee, issued a resolution that said any new trade deals with the US should take account of whether the conditions of the peace deal were met.

Northern Ireland deputy first minister Michelle O’Neill said a virtual meeting between herself, Northern Ireland first minister Arlene Foster, Biden and Harris had been “hugely beneficial” and “provided a valuable opportunity to discuss how we can build on the progress we have made and continue working to protect the interests of all our people”.

“The consistent backing of the US administration has been crucial in moving our society forward, not least through their unwavering support of the Good Friday Agreement,” O’Neill said.