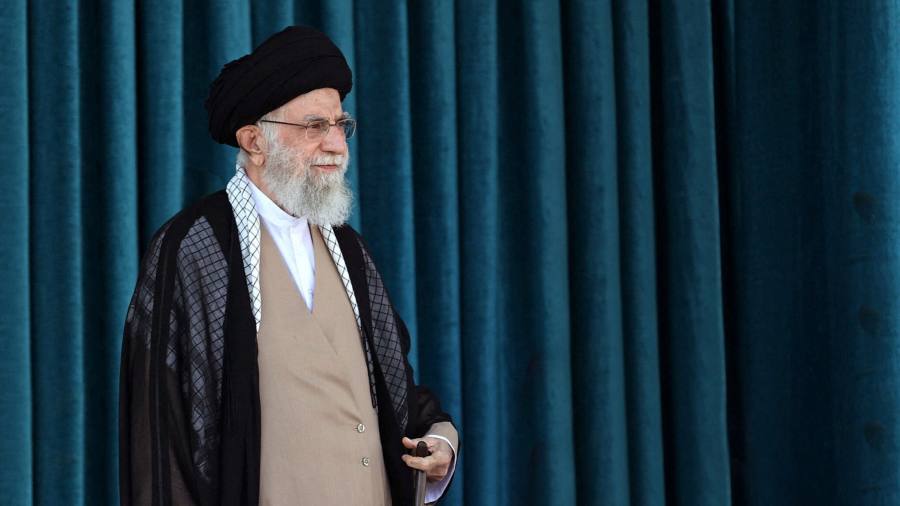 Iran’s supreme leader Ayatollah Ali Khamenei has accused the US and Israel of masterminding anti-regime protests prompted by the death in police custody of a young woman arrested for allegedly violating the Islamic dress code.

At least 41 people have been killed during a crackdown since protests erupted across the country in recent weeks, state television said. Amnesty International has put the number of deaths at more than 50.

In his first comments since the protests began, Khamenei backed the police and said “that these riots and insecurities have been engineered by the US and the fake Zionist regime while those on their payrolls and some expatriate Iranian traitors helped them”.

Khamenei told Iran’s armed forces in a public speech on Monday that he was also “hurt” because of “this incident” — the death of Mahsa Amini, a 22-year-old Kurdish woman after morality police arrested her in the capital Tehran. Her family said she was beaten in custody at the morality centre. Police officers denied this and said her death was linked to a pre-existing condition.

However, Iran’s top leader said while investigations were under way into what led to her death, it was “not normal” to see “some have made streets insecure, set alight the Koran, taken away the hijab from religious women’s heads and set alight mosques, religious venues and people’s cars”.

“In these incidents, the country’s police forces, the Basij [voluntary forces of the Revolutionary Guards] and the Iranian nation faced injustice. Of course, the Iranian nation in this incident showed up very strongly and it shall be the same in the future.”

Iran is experiencing the biggest unrest since 2019 riots over rising fuel prices. Young people have poured on to the streets at night or staged protests at universities during the day. Many protesters’ slogans are targeted at Khamenei, who has ultimate power in the theocratic state, rather than hardline president Ebrahim Raisi.

Protesters, initially angry at the obligation to wear the hijab and the treatment of Amini, are also calling for the establishment of a democratic, secular system.

On Sunday evening, students at the prestigious Sharif University in Tehran staged a protest and demanded the release of students arrested while chanting anti-regime slogans. Security forces arrested more than 30 students on Sunday alone, the students later said in a statement. The university announced on Monday that classes would be online only until further notice.

Western leaders have expressed support for the protesters and criticised the regime’s crackdown.

US president Joe Biden said during his speech at the United Nations General Assembly that his administration stood with “the brave citizens and the brave women of Iran, who right now are demonstrating to secure their basic rights”.

The UK summoned Iran’s charge d’affaires in London on Monday to condemn Tehran’s crackdown on protesters and urged the regime to respect the right to peaceful assembly.

“The violence levelled at protesters in Iran by the security forces is truly shocking,” said James Cleverly, Britain’s foreign secretary. “Instead of blaming external actors for the unrest, they should take responsibility for their actions and listen to the concerns of their people.”

Khamenei said that “the same enemy [US] which says in its diplomatic comments that it has no intention to strike Iran or change the [political] system, holds these intentions deep down and seeks to create riots and make the country insecure”.

He added: “Even if there were not the issue of this young girl, another excuse would have been found to create insecurity and riots in the country.”

Iran’s judiciary chief, Gholam-Hossein Mohseni-Ejei, vowed on Monday to deal with those who fan the crisis now that “it has become clear how the Great Satan [the US] and Zionists are leading the scene and train and equip terrorists to threaten Iranians’ security”.