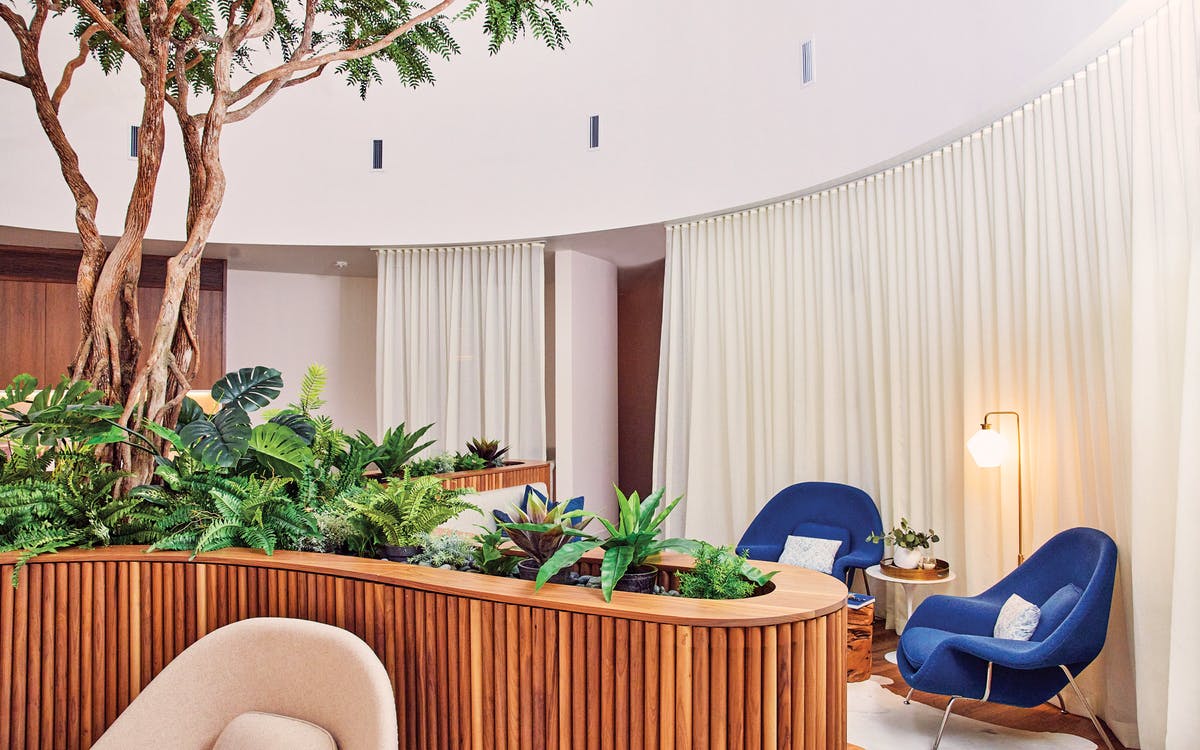 Given that we had spent most of the previous 716 days within fifty feet of each other, it must bode well for my husband, George, and me that we actually wanted to do a day-long couple’s spa retreat. With each other.

I suppose an emerging change in circumstances was helping our outlook. The pandemic seemed to be waning; the windows were opening to sunny breezes and chirping birds. Both the coronavirus’s spread and the weather could change in an instant, we knew. But despite every reason in recent history to be pessimistic, one day in mid-February, optimism ruled.

I’m told some couples travel or take a weekend for a retreat, and while those approaches sound lovely, they’re more practical if you’re childless, which we aren’t. We have two kids younger than fifteen, and their vaccination status had extended our pandemic caution after others had already begun going about their normal lives. Did we want to get out? Uh, yeah. But unless we felt like deserting our offspring or hustling up babysitting favors from friends and family, weekends and destinations weren’t going to work.

There was another option, however: the weekday. So, one Monday, we dropped our kids off at the bus stop at 7:15 a.m., exchanged a knowing nod, and aimed our car toward Austin’s Arboretum location of Milk + Honey, an upscale day spa based here that also has locations in Fort Worth and Houston as well as two out of state.

Neither of us knew exactly what to expect when we walked into the welcome area, which was lined with products for the upsell. George and I had indulged in a couple’s massage exactly once: on our honeymoon. That was seventeen years ago and far away, in Ho Chi Minh City. Our Vietnamese experience was limited to just a side-by-side rubdown, whereas this package was a luxurious three-hour affair that also included a manicure and facial. I suspect we both pictured a situation akin to the Emerald City beauty parlor scene in The Wizard of Oz, in which jolly workers restuff the Scarecrow with straw, polish the Tin Man, and style Dorothy’s hair and the Cowardly Lion’s mane, all choreographed to song. That’s how we keep you young and fair / In the merry old land of Oz.

The environment we stepped into was a more tranquil affair, one of muted tones and quiet piano music. After checking in, we were sent to separate-
gender changing rooms, where we swapped our clothes and shoes for white cotton-and-terry robes and brown recycled-plastic shower sandals before reuniting in the lounge: a circular, sunlit space where other clients in their identical robes and COVID-19 masks waited for their appointments among the small clusters of couches and chairs while sipping cucumber water or hot tea and munching on nuts.

This may have been George’s favorite part. He said the locker room change had felt transformational, making it clear to me that we needed to get out of the house more—though, no doubt, the otherworldly effect was the intention. “It reminds me of . . . what? Twin Peaks, but not sinister,” he said.

“The Good Place waiting room?” I asked, writing on a tiny notepad I carried in my robe.

Whenever an employee strode into the lounge with purpose, we craned our necks hopefully. Then we’d sigh as they would walk past to another robed customer, until finally it was our turn. A couple of friendly therapists emerged, introduced themselves, and led us down a hallway to where our parallel beds were warming.

Now, I tend to zone out during a massage. The second I slip underneath the sheets, I’m halfway zonked. I don’t want to talk to anybody, and I don’t want anybody to talk to me. Even if a therapist is shoving an elbow into a knot the size of a brussels sprout in my shoulder, I’m not making a sound.

But apparently George found my silence peculiar. He told me later he kept peeking over during the hour to make sure I hadn’t left the room or died on the table. My approach mystified him, as he tended to express himself more, commenting on the play-by-play, exhaling deeply and groaning, “Riiigght therrre,” like he was getting wrung out, as his lungs deflated.

After listening in silence, I couldn’t take it anymore. “What’s happening over there?” I asked.

“You think one area hurts, and then you realize, no, everything has been falling apart,” he said.

“How long has it been since your last massage?” I asked.

“I don’t remember. Maybe six years? Ten years?” he said. George’s therapist leaned into the iliotibial band along the side of his leg, and my husband moaned loudly.

A couple’s retreat can feel weird to someone not accustomed to spa therapies. While I sign up for a solo massage every opportunity I get—I did three at-home treatments during the pandemic—I realize now that if I hadn’t made an appointment for us together, another decade might have passed before a professional loosened the viselike grip of George’s knots. My offer gave him a good excuse. “For a guy, you can blame the appointment on the wife,” he told me later. “I’d never think to myself, ‘Oh, I need to get a facial.’ And I’ve never had anyone cut my nails in my life.”

I’d never had a manicure either. And my one facial, years ago, was about as memorable as an oil change. Why bother with those kinds of splurges, I’d always thought, when I could spend that time and money on a massage? I’m more into utility, I guess: strong hands trump pretty hands. With kids in the house, I’m frequently scrubbing with bleach, and George and I both dig in the dirt a few times a week. Our faces were . . . fine, I suppose?

If the manicurists were horrified by our hands, they hid their reactions well. Mine began by scraping and cutting my cuticles, preparing to apply a light pink polish that I had selected because I wanted it to look decent as long as possible, and one chip in a bright color was too risky. George mentioned that a knife wound on one of his right nails— the result of a kitchen incident—had recently healed, so his manicurist could shine him up to her heart’s content. He still had the gearhead hands of his youth; I thought to myself that she might have had better luck with horse hooves. “Men will say they don’t need nails done, but they do!” my manicurist said with a laugh. She’d even persuaded her dad to come in once for a pedicure. She didn’t see many male clients, she said, but when she did, it was usually for the couples’ packages, which had been selling well ever since the holidays, leaving most of Milk + Honey’s locations with a schedule booked through 2022 thus far.

“They’ve never looked so good,” George said as he admired his new nails on the way back into the lounge, where I promptly messed up the paint job on three of my fingers by brushing them against my hair. I was too blissed out to care. We snagged more cucumber waters (why we don’t make this simple refreshment at home, I do not know) and awaited our facials, during which we would be separated for 45 minutes in different rooms. (I, for one, was grateful; I assume that a lot of spouses don’t find it relaxing to hear their loved one grind teeth while getting zits popped.)

By hour three of the visit, as the hot steam opened my pores, I was beginning to recognize certain classical and light-pop piano standards pumped in over the speakers on a loop, but I was also loving that I wasn’t done yet. For me, a massage is the fastest way to pass the time, and to have that vibe carry on and on felt as luxurious as drinking a mai tai while traversing a gulf of warm water on the back of a magical turtle and being serenaded by Caetano Veloso. Every so often, the aesthetician whispered a running narrative of the protocol. “Okay, Katy, so this is coconut-and-grapeseed oil to remove makeup, dirt, and oil . . . This is a cranberry enzyme mask . . . Now I’m going to add an exfoliating mask with pineapple, honey, and aloe,” and so on. She rubbed my scalp, extracted dirt, massaged my arms and hands, rolled my face with a moisturizer, and topped it all off with some lip butter.

I wondered how often other couples were retreating for regeneration with this package, which started at $595. I’m told that I resist spending money as if I were a child of the Great Depression, so I wouldn’t have been surprised if my aesthetician had said it was a weekly occurrence for many. I was relieved to hear it wasn’t that often. “Lots of couples are coming in just before they get married,” she said before leading me out of the room. “Just yesterday I had a couple getting married in three weeks.”

As I sat in the lobby, poking at a few plants to determine if they were real (they were not), George emerged from the treatment hallway in his robe. A vigorous scalp massage during his facial had drawn out his pandemic-length hair so that it stuck straight out on both sides.

“Wow! You look like Doc Brown from Back to the Future,” I said.

“He does!” the aesthetician enthused.

“You’re not supposed to agree,” George told her.

After the aesthetician bade us goodbye, George wandered over and sat down next to me, dazed. We talked about something; I don’t remember what, since I was still distracted by the hair.

“Well,” he said, “it was an adventure together. Makes it less pedestrian to do it together, the same way that in a restaurant, a five-course meal is an adventure. There’s something intimidating about the lounge in your robe if you’re by yourself.”

On the drive home, we were a little giddy. Soon our kids would be home from school, as on any other day. But we were relaxed, and our skin was glowing. George joked about making this a monthly routine. He could always do it by himself, I said. He shot me a glance. “It was a lot of fun,” he said, “but there is no way I would have done that alone.”

This article originally appeared in the May 2022 issue of Texas Monthly with the headline “A Marital Bliss-out.” Subscribe today.