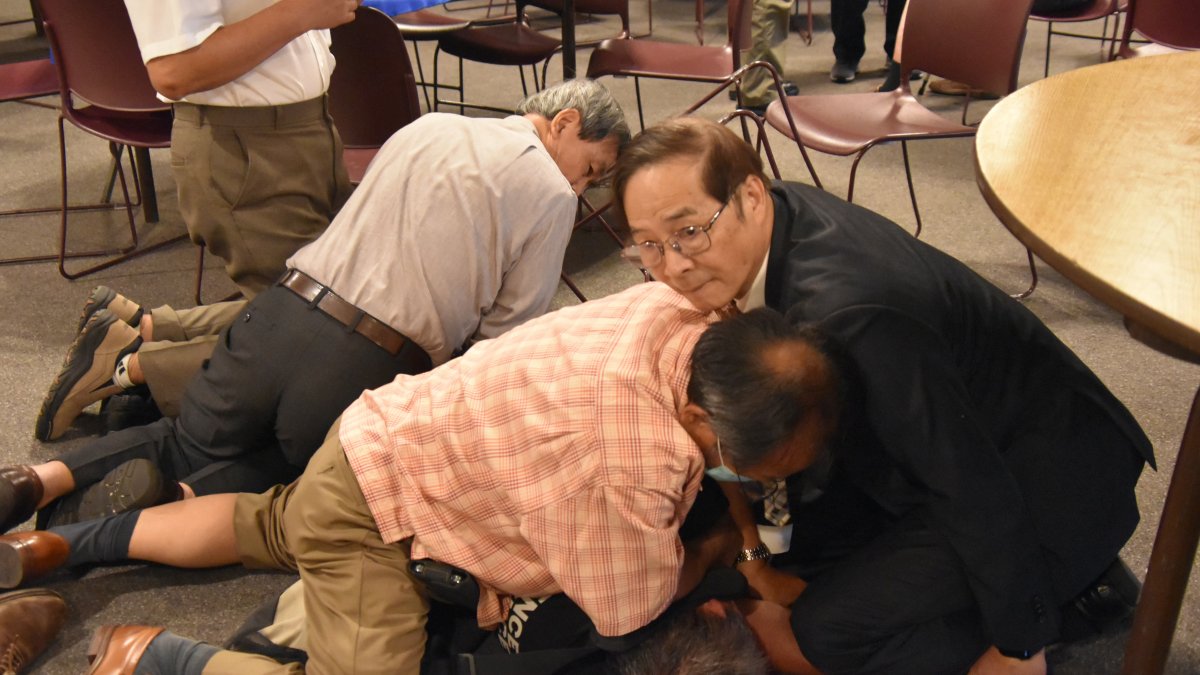 The powerful images show a group of congregants holding down the 68-year-old suspected shooter, who authorities say traveled to the Geneva Presbyterian Church in the city of Laguna Woods in Orange County from Las Vegas, Nevada.

He was not a regular attendee of the church and has no known ties with the congregation.

About 50 or so parishioners were at a luncheon at the church, and reportedly greeted the suspect when he arrived.

The Orange County Sheriff Don Barnes said Dr. John Cheng, 52, first charged at the accused gunman, tackling him so others could get control of the suspect. He called Cheng a hero, and said the doctor and father of two without a doubt saved lives by taking action.

After Cheng charged, other parishioners hog-tied the suspect, later identified as David Chou by the OC Sheriff’s Department, with an extension cord.

Cheng died of his injuries. Five people were injured in the shooting, four of them critically.

Investigators described the mass shooting as very methodical, and as a politically motived hate incident.

Investigators said evidence suggests Chou, a Chinese immigrant, held a grievance involving the Taiwanese community. China claims Taiwan is a part of its national territory and has not ruled out force to bring the island under its rule.

“This was a politically motivated hate incident, a grievance that this individual had between himself and the Taiwanese community,” said Orange County Sheriff Don Barnes at a noon news conference. “It is believe the suspect was upset about political tensions between China and Taiwan.”

The Taiwanese congregation at Geneva Presbyterian Church had gathered for a lunch celebrating a former pastor, when they spotted a man in his 60s acting strangely. Annette Arreola reports for Today in LA on May 16, 2022.

Chou will be charged with one count of murder with the use of a gun, special circumstances of lying in wait, five counts of attempted murder — one for each of the victims shot — four counts of unlawful possession of explosives. The suspect is eligible for life without possibility of parole, or death, Orange County District Attorney Todd Spitzer said.