‘I’ll have your back’: can Biden deliver for black voters? 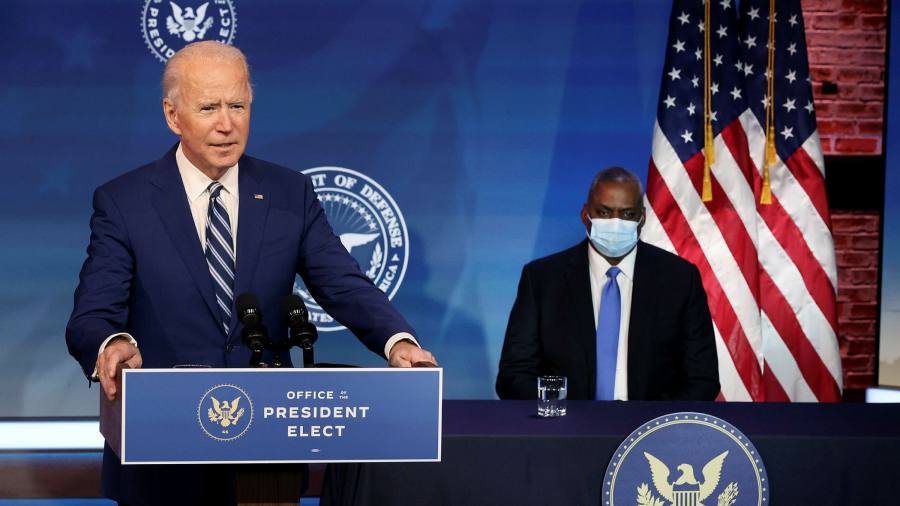 When Joe Biden was declared the victor of the November presidential election, he had a clear message for the black voters who propelled him to the White House: “You’ve always had my back, and I’ll have yours.”

Now Mr Biden is under pressure to show that he can deliver for the African-Americans who proved so crucial to his winning campaign. He is already on track to assemble the most diverse cabinet in US history, and used the opening days of his presidency to issue executive orders aimed at addressing racial inequities in the housing market and the response to the pandemic.

But while Mr Biden can use executive action to make some changes, his most ambitious plans — from restoring and expanding voting rights to increasing the minimum wage and implementing sweeping police reforms — will prove much harder, especially given that he needs support from Congress.

“[Biden] has come out his first week showing that there is good faith,” said LaTosha Brown, co-founder of the advocacy group Black Voters Matter. “But that’s not the be all and end all. We’ve got to have some major changes in this country.”

Even though Democrats control both chambers of Congress by narrow margins, they need approval from at least 60 senators — or at least 10 Republicans — to pass legislation. That will prove no mean feat, as illustrated by the Republican party’s rejection of his $1.9tn coronavirus relief plan, which includes a proposal to more than double the federal minimum wage from $7.25 to $15 an hour.

“I don’t think it’s just a matter of black voters helped us win the election,” said Adrianne Shropshire, executive director of advocacy group BlackPAC. “Black voters mostly want to see real policy that changes not only their lives but the lives of all Americans.”

Mr Biden’s ascent to the White House has been attributed in large part to the support of black voters, who first turned out in large numbers for him in the South Carolina Democratic primary, and were later credited with his victories in key battlegrounds in November’s general election.

That was particularly true in Georgia, a southern state that had not selected a Democratic presidential candidate in almost three decades. Then, in January, Georgia voters elected Democrats Raphael Warnock and Jon Ossoff in Senate run-offs, clinching control of the upper chamber of Congress for Mr Biden’s party.

Democrats will need similar levels of support from black voters to be successful in the 2022 midterm elections, when the entire House of Representatives and roughly one-third of the Senate — including Mr Warnock’s Senate seat in Georgia — will be up for grabs.

When it comes to cabinet appointees, Mr Biden has stuck to his word. According to Inclusive America, a non-profit that promotes diversity in government, Mr Biden’s cabinet, if confirmed, would be half white and half non-white, and nearly one in four appointees would be black or African-American.

“President Biden has done a good job in terms of representing the diversity of America in his key first appointments,” said Andra Gillespie, director of the James Weldon Johnson Institute for the Study of Race and Difference at Emory University in Atlanta.

Mr Biden’s team includes Lloyd Austin, the country’s first black defence secretary, and Linda Thomas-Greenfield, who, if confirmed, would be the first black woman to serve as US ambassador to the UN. Marcia Fudge, a veteran of the Congressional Black Caucus, has been tapped to head up the US Department of Housing and Urban Development, and Susan Rice, a former official in the administration of Barack Obama, is back in the White House as director of the domestic policy council.

Ms Fudge told a Senate committee last week that she would use her role to end discriminatory housing policies and boost black home ownership, in part by providing down payment assistance to people in neighbourhoods that had previously been “redlined”, or denied mortgages based on their race.

Ms Brown of Black Voters Matter also welcomed Mr Biden’s appointments, but cautioned that the diversity of a cabinet does not alone guarantee that the wider government will prioritise the needs of black voters.

“What I don’t want to see happen, and I’ve seen this, where we’ve got the leadership in position, but there is a lack of will around priorities in the budget,” she explained, referring to the annual federal budget, which must be approved by Congress.

Mr Biden’s first two weeks in office have been marked by a flurry of unilateral executive orders, many of which are intended to address racial inequities. The president has ordered all government agencies to conduct “equity assessments” to determine whether resources could be channelled toward underserved communities, and to set up a Covid-19 “health equity task force” to address how the coronavirus pandemic has disproportionately affected black Americans and other racial and ethnic minorities. He has also directed HUD to look at whether the Trump administration “undermined” fair housing laws.

Ms Gillespie at Emory University called the executive orders “important first steps”. But she added that black voters and activists would want to see sustained commitments from the administration in the months to come.

“It is great that in his first 10 days in office he issued a number of executive orders that target racial equity that can help him keep campaign promises,” she said. “But the big test is: what is he going to be focused on six months from now?”