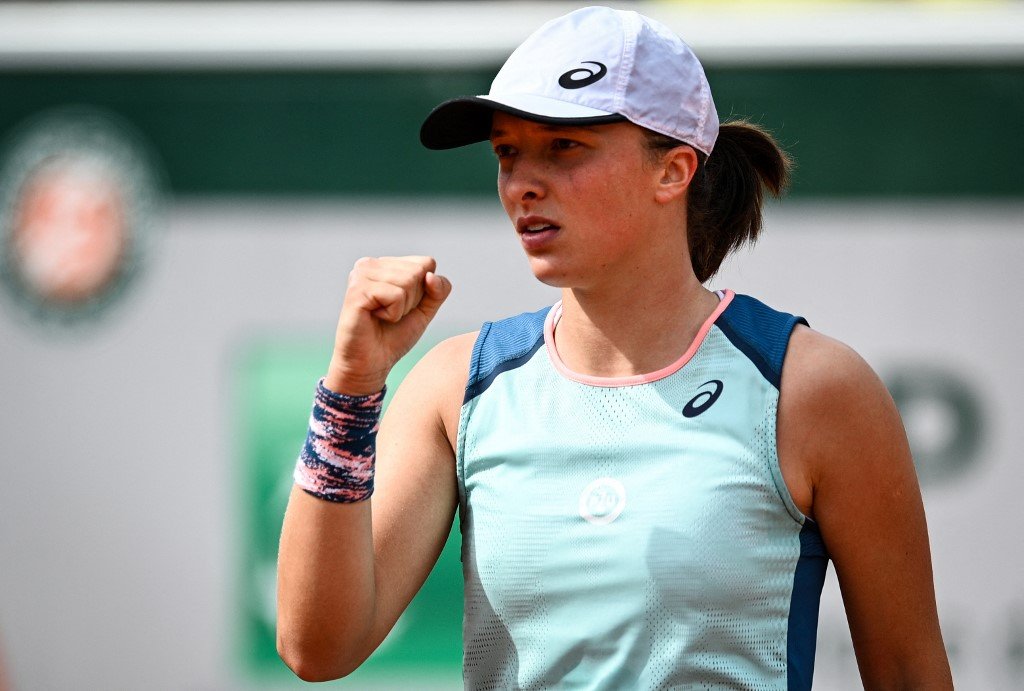 Poland’s Iga Swiatek reacts as she plays against US’ Alison Riske during their women’s singles match on day five of the Roland-Garros Open tennis tournament at the Court Suzanne-Lenglen in Paris on May 26, 2022. (Photo by Christophe ARCHAMBAULT / AFP)

Iga Swiatek is the only woman seeded in the top 10 still standing at the French Open following her 6-3, 7-5 defeat of Danka Kovinic in third-round action at Roland Garros on Saturday.

Entering the day’s play, No. 1 seed Swiatek, No. 3 Paula Badosa of Spain and No. 7 Aryna Sabalenka of Belarus were the only top 10 seeds remaining in the women’s draw.

But Badosa retired with an injury in the second set against No. 29 Veronika Kudermetova of Russia, and No. 28 Camila Giorgi of Italy topped Sabalenka in three sets.

The highest remaining seed after Swiatek is No. 11 Jessica Pegula, who defeated Tamara Zidansek of Slovenia 6-1, 7-6 (2).

With her win over Montenegro’s Kovinic, Swiatek extended her winning streak to 31 matches. The 2020 French Open titlist, the Polish star now has won 17 of 19 career matches at Roland Garros.

During the streak, Swiatek has won titles in Doha, Indian Wells, Miami, Stuttgart and Rome.

Swiatek wasn’t her typical sharp self against Kovinic, who converted all three of her service break opportunities. Swiatek hit just 13 winners against 23 unforced errors.

“I changed the tactics in second set a little bit to play less risky, but then I did some mistakes,” Swiatek said. “I lost my breaks. I’m not perfectly happy with that, but overall I’m happy with the performance, and that I came back in the second set.”

In the fourth round, Swiatek will face 19-year-old Qinwen Zheng of China, who reached the fourth round of a major for the first time. She moved on after Alize Cornet of France retired due to a left thigh injury, trailing 6-0, 3-0.

The injury bug also hit Badosa, who took a medical timeout in the second set to treat a right leg issue but retired trailing 6-3, 2-1. As a result, Kudermetova moves into the final 16 of a Grand Slam tournament for the first time.

Kudermetova will face No. 22 seed Madison Keys for a spot in the quarterfinals. Keys struck 44 winners and rallied for a 3-6, 6-1, 7-6 (3) victory against No. 16 Elena Rybakina of Kazakhstan.

Sabalenka jumped out to a 1-0 lead but had no answer for Giorgi in the final two sets, managing to win just one of 13 games. In all, Sabalenka won points on just 60 percent of her first serves compared to 76 percent for her opponent, and her serve was broken six times.

Giorgi now has won five of her past seven matches against players ranked in the top 10. In the fourth round, she will play Russian Daria Kasatkina. The No. 20 seed, Kasatkina cruised by American Shelby Rogers in straight sets.