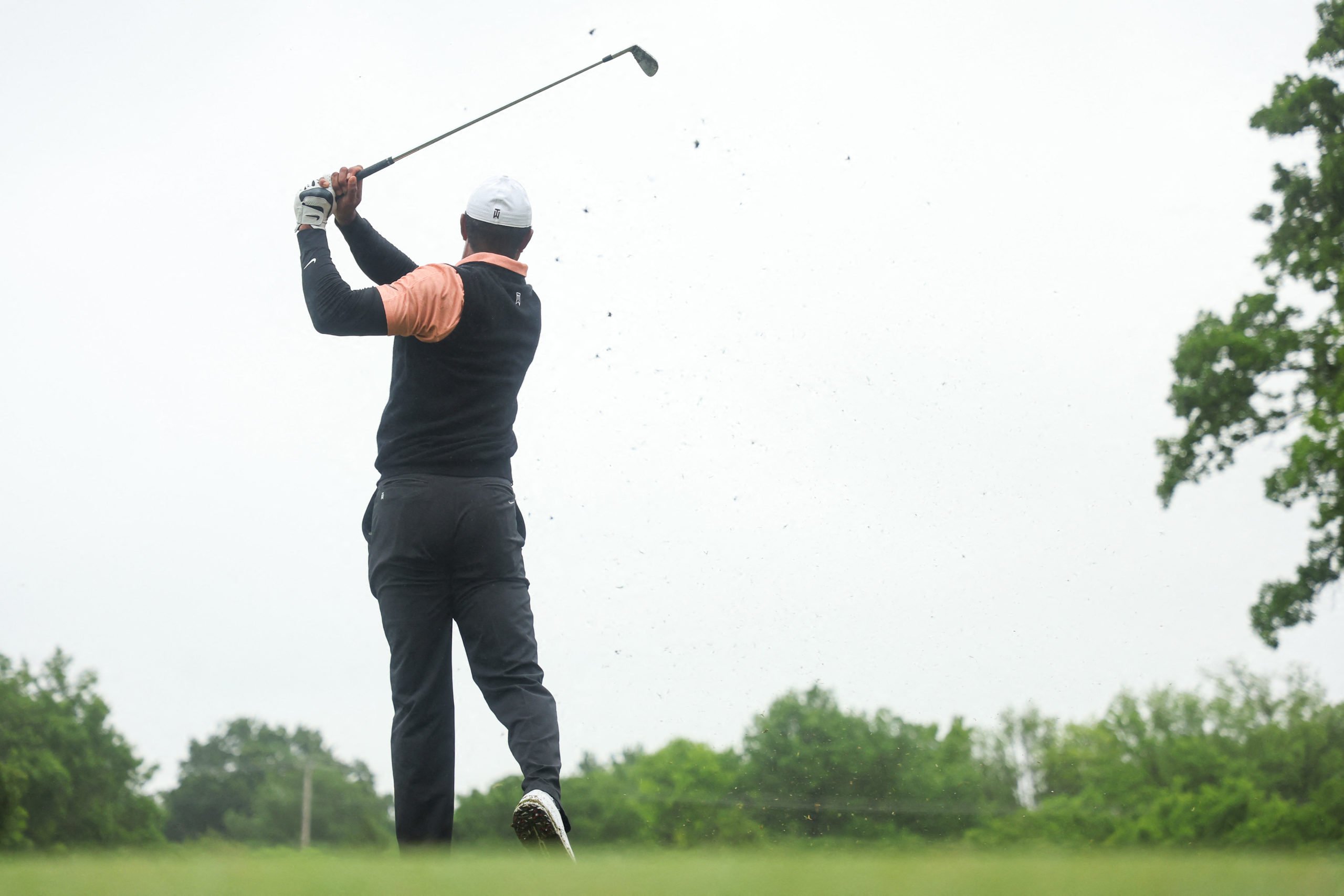 Tiger Woods of the United States plays a shot on the 11th hole during the third round of the 2022 PGA Championship at Southern Hills Country Club on May 21, 2022 in Tulsa, Oklahoma.   (Getty Images via AFP)

TULSA – Tiger Woods struggled to the third-worst major round of his career with a nine-over par 79 in Saturday’s third round of the PGA Championship and the 15-time major winner wouldn’t commit to playing Sunday’s final round.

Asked if he definitely would play on Sunday after he limped through the third round on his injured right leg, Woods replied, “Well, I’m sore. I know that is for a fact.

“We’ll do some work and see how it goes.”

Woods made five consecutive bogeys at a major for the first time in his career from the ninth through 13th holes and stood on 12-over 222 after 54 holes at rain-hit Southern Hills.

“I didn’t do anything right,” Woods said. “I didn’t hit many good shots. Consequently I ended up with a pretty high score.”

Woods, who suffered severe right leg damage in a February 2021 car crash, shared 76th — last place among the 79 players who made the cut.

Woods struggled to his worst-ever score in 79 PGA Championship rounds and his only worse major scores were a 10-over 81 in the third round of the 2002 British Open and a 10-over 80 in the first round of the 2015 US Open.

“I just didn’t play well,” Woods said. “I didn’t hit the ball very well and got off to not the start I needed to get off to.”

After Woods spent weeks hospitalized and months unable to walk, he recovered well enough to return only 14 months later at last month’s Masters, sharing 47th and pleased to walk all 72 holes.

But after struggling to his worst Masters rounds with weekend 78s, Woods again could not follow the effort to make a cut in Tulsa with a solid round.

Former world number one Woods, now ranked 818th, has said all week his right leg hurts after rounds with limited mobility and strength.

He requires ice baths and physical therapy between rounds to enable his right leg — held together by rods, plates, screws and pins — to have the strength to walk the 7,556-yard course.

Woods sank a 13-foot par putt at the first hole but found water off the second tee on the way to a bogey then lipped out a five-foot birdie putt at the fourth.

“I thought I hit a good tee shot down two and ended up in the water, and just never really got any kind of momentum on my side,” Woods said.

After another tee-shot splashdown at the sixth, Woods hit into greenside rough and needed three to get down for triple bogey, then missed a six-foot putt to bogey the seventh.

At nine, Woods embedded a ball in bunker-side grass blasting out of the sand and needed an eight-foot putt to salvage bogey and a six-over 41 on the front nine.

That began his run of five bogeys in a row, errant tee shots costing him time and again.

“I couldn’t get off the bogey train there,” Woods said.

Woods sank a 36-foot putt at the par-4 15th for his only birdie of the day and closed with three pars.

South African Shaun Norris, who played alongside Woods on Saturday, was amazed at his pain tolerance.

“He grinds through everything and pushes himself, even all the pain,” Norris said. “It’s not easy to see a guy like him have to go through that and struggle like that.

“He’s swinging it nicely and I think he’ll be back once he gets back to normal health and sorts out all the problems.”