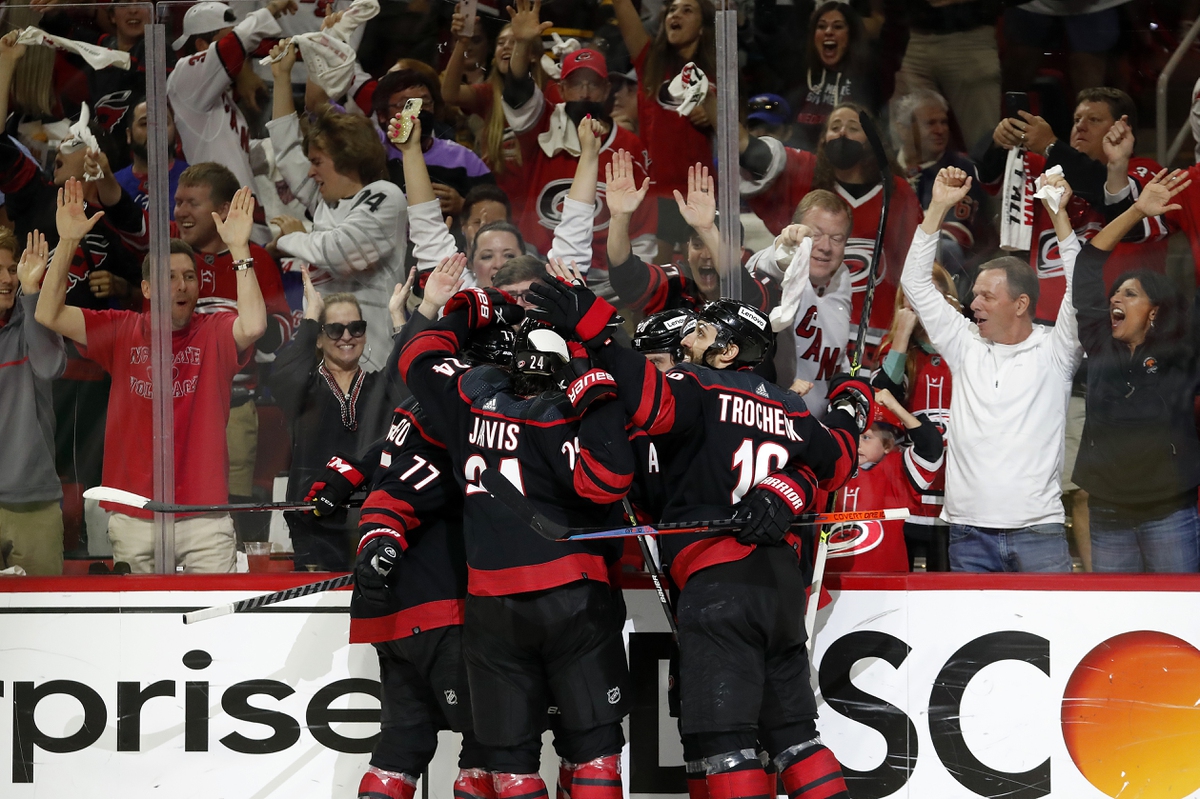 The Carolina Hurricanes celebrate a goal by Teuvo Teravainen against the New York Rangers during the second period of Game 5 in Raleigh, N.C., Thursday, May 26, 2022.

RALEIGH, N.C. — Vincent Trocheck buried a short-handed goal, Teuvo Teravainen had a rare power-play score for Carolina and the Hurricanes beat the New York Rangers 3-1 on Thursday night to take a 3-2 lead in the second-round playoff series.

Andrei Svechnikov also scored, beating Igor Shesterkin with a backhander on a breakaway midway through the third period as the Hurricanes protected their Game 5 lead.

It was part of yet another strong home performance for the Metropolitan Division champions, who improved to 7-0 at home in the postseason.

The Hurricanes can advance to the Eastern Conference finals to face reigning two-time Stanley Cup champion Tampa Bay by winning Game 6 in New York on Saturday, though they are 0-5 away from PNC Arena so far despite tying for the NHL lead in regular-season road wins.

The Hurricanes controlled long stretches of play by sustaining their aggressive style, finishing with a 34-17 shot advantage to keep the pressure on Shesterkin while also easing the burden on Antti Raanta (16 saves) in Carolina’s net.

Now Carolina faces the challenge of putting away a team that has been resilient, even stubborn, when facing a series deficit. The Rangers rallied from a 3-1 hole to beat Pittsburgh in a seven-game first-round series, then lost the first two games against Carolina before fighting back to even at home.

Mika Zibanejad scored a power-play goal for New York, winning a first-period faceoff and then drifting to the left side for the putaway just six seconds into the man advantage. Shesterkin — a finalist for both the Vezina Trophy for the league’s top goalie and Hart Trophy for most valuable player — finished with 31 saves against a steady stream of work.

The Hurricanes’ power-play struggles have been going for two months, with coach Rod Brind’Amour preaching the importance of execution more than any major changes to what had been one of the league’s top-10 units to that point. But things just hadn’t improved, with Carolina coming into this game converting on just 9 of 89 opportunities (10.1%) since late March.

Yet after an 0 for 9 start in the series, the Hurricanes finally broke through with quick and crisp puck movement. Rookie Seth Jarvis zipped the puck to Teravainen for the left-side putaway to beat Shesterkin at 9:47 of the second for the 2-1 lead, marking Carolina’s first goal with the man advantage since the final minutes of Game 6 in the first-round series win against Boston.

Carolina’s first goal came on special teams, too, though this on a perfectly executed shorthanded rush off a turnover by Rangers defenseman Jacob Trouba. Jordan Staal carried the puck on the left side until Rangers defenseman K’Andre Miller laid out to stop a pass, but Staal lifted the puck off the ice and over Miller’s legs to a charging-in Trocheck on the right side for the 1-0 lead at 12:57 of the first.

Carolina’s seven-game home winning streak is the longest in a postseason since Chicago won its first seven games in 2014, a run that ended in the conference finals.

Carolina’s seven-game home streak is the longest in franchise history for a single postseason.