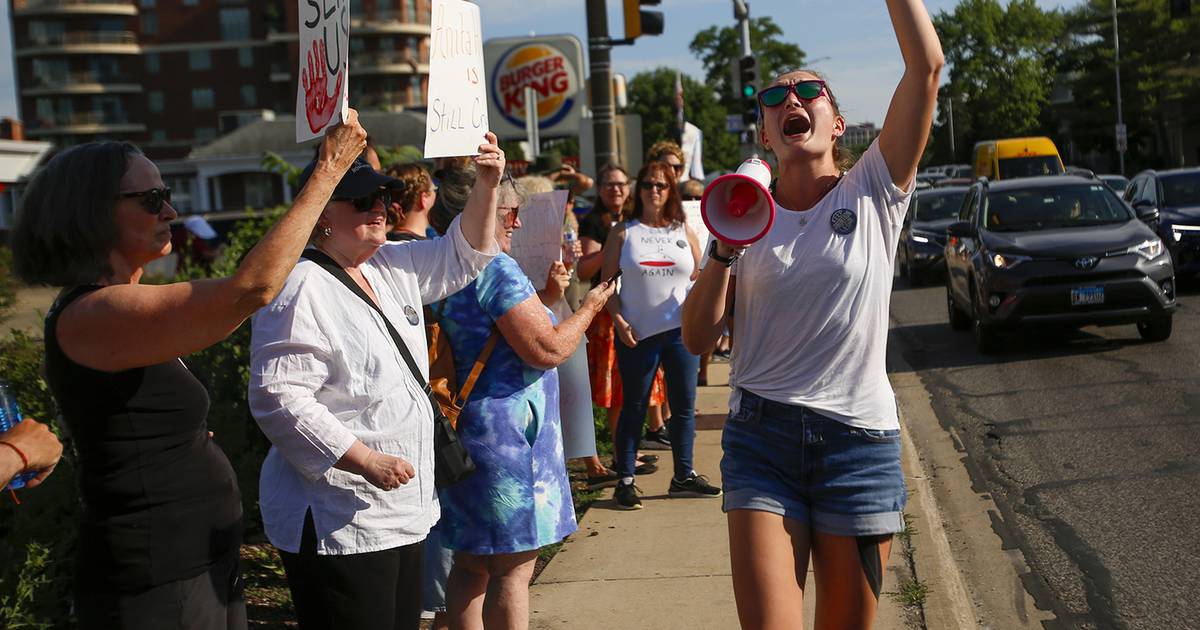 A woman dressed as a character from Margaret Atwood’s novel “The Handmaid’s Tale” stood in silence at the busy Naperville intersection Friday afternoon holding a simple message written on paper: VOTE.

She was one of the hundreds of people lining Washington Street from Chicago Avenue to south of Aurora Avenue in defense of a woman’s reproductive freedom after a U.S. Supreme Court opinion earlier that day struck down what protesters said was nearly a half-century of protections.

Friday’s rally was organized by the League of Women Voters of Naperville, Naperville AAUW, the National Council of Jewish Women and Illinois NOW.

Susan Craighead, president of the Naperville LWV, said reproductive health care is essential health care and a fundamental right that the Supreme Court has undermined by stripping women and pregnant women of their personal autonomy.

“A woman has a right to choose because she’s not a second-class citizen in this country, and men can’t be deciding rules for women’s bodies when we don’t put rules on their bodies,” Calderwood said.

“AAUW Naperville Area trusts that every woman and person who can become pregnant has the ability to make their own informed choices regarding their reproductive life within the dictates of their own moral and religious beliefs,” Vernon said.

“While we recognize and are grateful for the protections granted in the state of Illinois, we will continue to fight to protect reproductive rights which include access to contraceptive care, abortion, sexual health education and family planning services for all Americans,” she said.

“It just stops safe ones. Women are going to start doing whatever they can to keep their body autonomy and that includes unsafe things,” said Beling.

She said just because people don’t support abortion does not give them the right to take away someone else’s right to choose.

“I know plenty of people who are anti-abortion for themselves who are pro-choice because they believe in everyone’s right to choose and they know that they don’t have the right to choose for someone else,” Beling said.

Olivia Zary, 17, of Plainfield, said she no longer has faith in the Supreme Court.

“I think it tells our generation that they don’t really take into account how we feel and our opinions and beliefs,” Zary said.

Dinah Smith, of Aurora, said she’s terrified for America “because this is just the beginning.”

“This is just one right that’s been taken away. They’re not stopping,” Smith said.

Jill Lexier, state policy advocacy chair with the National Council of Jewish Women said it’s “cruel and shameful” to wipe out 50 years of precedent and leave millions of people without health care

“We are outraged. Every person deserves the ability to make decisions about their own bodies and their futures. This decision supports forced pregnancy, and it endangers the lives of people who will no longer have access to the care they need without having to travel hundreds of miles and pay thousands of dollars,” Lexier said.

“Proponents of these restrictions often claim that they’re acting based on their religious conviction, but we know that most people of faith support access to abortion,” she said.

Lexier said Jewish tradition not only permits abortion, but in some cases when the pregnant woman’s well-being as at risk, requires it.

“By overturning Roe, the court has codified one narrow religious ideology into law, abandoning our constitutional right to religious freedom and trampling on the rights of Jews and other religious individuals,” Lexier said.

The Rev. Ronald Hicks, bishop of the Diocese of Joliet that oversees many of the Catholic churches in Naperville, said in a statement the court’s decision is an answer to decades of prayer and upholds the protection of the unborn, which has long been a tenet of Catholic social teaching.

“I celebrate this ruling yet mourn the fact that here, in our home state of Illinois, it will have no immediate impact given the state’s 2019 enshrinement into law of abortion as a misguided fundamental right,” Hick said.

“Perhaps the court’s ruling and recent public conversations, coupled with our own prayers, will stir within the hearts, minds and souls of our elected political leaders a greater respect for the beauty and dignity of human life from conception to natural death,” he said.