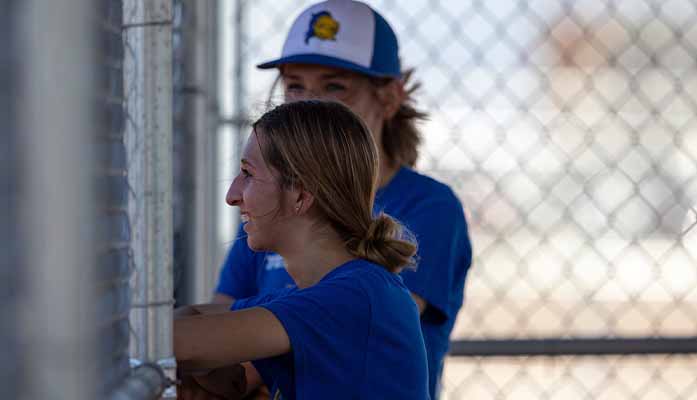 TEMPE – As Tempe Preparatory Academy prepared to begin its baseball season in February, the program encountered a problem that threatened its ability to compete.

The Knights did not have enough players to field a team, and forfeiting games loomed as a distinct possibility.

“We were at a real risk of forfeiture,” Tempe Prep coach Brad Sullivan said. “We were going to forfeit.”

As a last-resort measure, Sullivan turned to an unlikely place. Amy and Kailey Gonzalez joined their brother, freshman David Gonzalez, on the baseball team, giving the squad enough bodies to avoid forfeitures.

Amy, a senior, and Kailey, a sophomore, are both multi-sport athletes. They have played soccer and volleyball, and Kailey also does cheer. However, neither had ever played softball growing up, let alone baseball.

Despite the sisters’ lack of baseball experience, Sullivan was adamant about giving them a shot if they wanted to try.

Kailey was first approached by Sullivan before one of David’s games. Sullivan brought up the idea of joining the team. At first, Kailey and her father laughed it off.

“I really thought he was joking,” Kailey said. Sullivan had already discussed it with his assistant coaches, however, and was serious about bringing Kailey aboard.

Kailey thought about it for a while, and when Amy said she would do it with her, the two sisters were in.

Over the course of the season, Amy and Kailey have done more than just occupy roster spots. They have logged at-bats and time on the field and the bases.

They have gone from barely knowing the basics of the game to understanding some of its intricacies.

“First day I came out here, I knew about two percent of what was going on,” Amy said. “And now I think I definitely can tell you what’s going on.”

Not only has it been a fun learning experience for the sisters, it has also given them the opportunity to play an organized sport with their brother for the first time.

“They thought that was pretty cool, and so that was something that I thought would be nice to do,” Sullivan said.

Not only was it their first chance to be on a team with David, it was one final chance for the sisters to play an organized sport together. Although they were usually on different volleyball teams growing up, they advanced through the ranks of soccer together.

At Amy’s senior night in soccer, the two became emotional thinking that it would be the last time they would play on the same team. Through baseball, they’ve gotten bonus time together.

“I remember the first day of baseball practice, (Kailey) looked at me in the car and was like, ‘I knew we would play together again, I knew we would have one more thing,’” Amy said.

The rest of the team has welcomed the sisters with open arms and made them feel comfortable. Kailey described the team as encouraging and protective, and Amy said all the boys have been amazing and supportive.

Both said that the entire team is willing to help teach them about the game, lend equipment and assist them with whatever they need.

“They’ve all embraced it,” Sullivan said. “No one razzes them or gives them a hard time. Everybody’s been very supportive.”

The Gonzalez sisters hope that their story encourage others not to be afraid to try it.

Not only have the Knights been able to field a team, they are competing for a 1A playoff spot. They are 9-8 with two games remaining on their regular season schedule.