How to Make Money By Developing a Mobile Web App 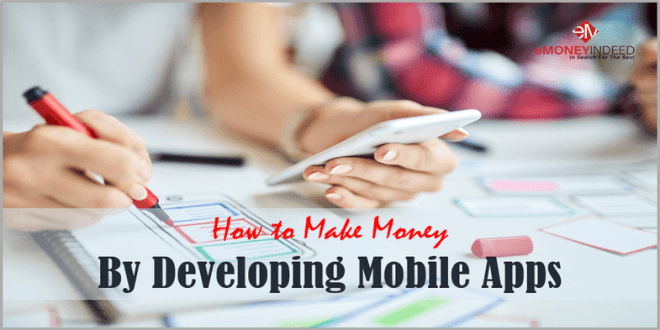 There are relatively few online industries as exciting (or as lucrative) as mobile web app development.

That said, it’s in a vast ocean of competition, with a lot of opportunities to either make it big or fade into obscurity.

With a great idea and a little research, it’s not hard to imagine creating an application that takes the market by storm and becomes a real income source.

Must Read | How Is Mobile Technology Becoming A New Opportunity For Merchants?

But you’ve got to know what you’re doing.

Which is why, in today’s article, we’ll be taking a closer look at what you need to make a great mobile app, and how to make money from your creation.

Before we get started making money from our mobile apps, it is important to know the industry you’re going to be playing in.

The user searches for an app on the app store.

A minute or so later, they’re using your app, just as planned.

The way they work and their design, however, dictate whether these apps fall into the category of native or hybrid. And this distinction, as we’ll come to find, makes all the difference in the final product.

These are mobile apps in the more traditional sense.

Written in languages specially designed for their specific platforms, these apps are easy to use, as a rule.

Developers create iOS apps for iPhones and Apple devices, in Swift or Objective-C.

Java is perfect for creating native apps for Android phones, tablets, and devices.

And, for those targeting the less mainstream Windows phone market, C# is the language of native applications for this platform.

By way of benefits, there are more than just a few. There’s a reason, after all, that native apps are more popular than hybrid varieties for mobile devices.

First off, they’re proven to be faster and more responsive on the user end. Faster even than web apps, native applications work well on mobile devices where a simplified experience is necessary.

These apps tap into the device’s functionality, such as cameras, mics, and accelerometers. This gives you more room to do interesting things with your development. Push notifications give your device better connectivity with your app.

Some disadvantages of going native (so to speak) include their higher price compared to hybrid apps and the amount of work they require. These apps need building from the ground up, in one solid piece, without bridging any data over from other platforms.

Native mobile apps, as we’ve mentioned, are created solely inside of mobile orientated environments. They are made, from beginning to end, for use on a phone or tablet, like web apps for a computer or laptop browser.

Hybrids, perhaps unsurprisingly, use the best parts of these two types of apps. These apps benefit from the traditional combination of HTML, Javascript, and CSS as if they were going to be run on a computer. From there, they’re run on mobile devices, instead, through a built-in browser called Webview.

Because there’s more that needs to get done, processor-wise, to run these apps, they might not run as quickly as native apps.

What makes up for this is having a mobile web app built to a standard, with one code base, right off the bat. There’s no creating a desktop app, then creating a mobile version of it with a completely different language. Your app is your app, optimized and ready for both desktop and mobile, right away.

Lest it seems like we’re ignoring it, hybrids also get access to mobile functionality, like cameras, mics, and accelerometers. You’ll save money and time on development, and hybrid apps are also easier to scale from desktop to mobile.

Without the functionality to make an Android mobile web app feel like an Android app, these users will notice a change in how your app feels. And, because these users typically choose their devices because of a loyalty to its design, they’re less likely to embrace the change.

Now that you know what your options are, it’s time to get into the reason behind this industry.

Why Are Mobile Apps Valuable?

This is less specific, as the real answer is: “Because they can be anything.”

It’s your job as a developer to use the tools at your disposal to create something that serves a purpose to users.

Identify a niche market where users might benefit from using their cameras to carry out tasks quicker than they otherwise might. Create something fun that taps into that primal question: “What am I going to play while I’m on the toilet”.

Whatever your inspiration, the reason mobile apps are valuable is unique to you. This is a battlefield with a lot of fights going on at the same time. It’s your job, as a developer to pick the one you can win.

The popularity of mobile web apps runs from game and business apps, down to utilities, then music, productivity, and, finally, finance. This should indicate to you which mobile apps are the most lucrative to develop.

The first ingredient in a popular mobile web app is validity. If your app builds on the ideas of apps that have come before it, do your research and make sure that it’s actually offering something new.

If users are already getting your image recognition functionality from another app, they’ve got no reason to switch.

Read | Get More Mobile App Installs: How to Reach the Top Charts

Next, you’re going to want to do your research. Is there a potential customer base out there, who will be willing to pay for and use this app, before maybe recommending it to a friend?

And what avenues are your competition using to market their apps? There are more than just one way to monetize your mobile web app — have you considered branching out to help bring in more revenue from your downloads?

Plan Out Your UX Beforehand

You might not be an artist, but this doesn’t matter. You’re going to need to bust out the paper, some colored pens and a ruler, and design your user interface before you start creating your mobile app.

Creating your app this way locks you into a functionality based on what “works” for the layout. Once you’ve decided on what the mobile app will need to do, and where those functions will trigger, you can make decisions about how to make that work.

Without a plan, you’re more likely to forgo one function for another, make concessions, and compromise your project.

Of course, the elephant in the room for any app developer is the question of whether to create for Android or iOS.

Each system has its own benefits and problems.

Apple uses an extensive developer ecosystem, with apps locked into very specific features, approved of by Apple. These apps are seen as more exclusive and tend to fetch a higher price, especially if they are successful.

Android, known for being a relatively open source platform, operates on an open source ecosystem. This permits developers to use a lot more modifications to improve their functionality. This helps to encourage creativity and innovation in developers.

They also tend to be less secure. They also aren’t as exclusive as Apple apps, which mean they might sell fewer units, or at a lower price.

You May Like | Revealed: How To Make Money From A Mobile App!

How To Create Something That Actually Makes Money

Now that you know what a good mobile app is, and what the competing mobile platforms have to offer as developers, the question remains.

“How do I make money from this?”

The most obvious answer is pay-per-download. Through research and your own decision-making process, decide on a price per download of your app, and set it up for purchases, accordingly.

You’ll want to look into subscription plans, as well, and set a price based on the market value of your product. For an app with good design and a useful enough function, you’d be surprised how willing users are to commit to a subscription.

Advertisements are a monetizing system with a structure already in place. Simply install an advert system into your app in an appropriate place, and you’ll be eligible for a certain amount of the profits from these ads.

In-app purchases are another popular option for monetizing mobile apps. If you can find a way to “give more” from your app to people who buy into in-app purchases, this makes for a rewarding option for everyone involved.

There are a lot of great options for mobile web app development.

Interested in learning more about making money online? Discover mobile web app development and other income solutions, with our comprehensive blogs on the topic.

My name is Gaurav Jain, a full time affiliate marketer since 2007.
The reason for starting eMoneyIndeed.Com blog is to help you Save & Make Money Online.