Emerging infectious diseases (EIDs, novel diseases in a population or extant but rapidly increasing in incidence or geographic range), have been increasing in wildlife populations in the last several decades, and they are expected to increase with global climate and anthropogenic change. However, usually when we think of diseases, we probably first think humans, then probably agriculture, and then maybe some of us venture into the terrestrial ecosystem. It is rare that “marine” diseases pop up in one’s mind when thinking about EIDs. Indeed, marine diseases are relatively understudied as compared with terrestrial diseases.

Glidden and authors argue that marine disease warrant parallel attention, given that they can cause disorder to ecosystems, threaten human livelihoods, and cause significant economic losses. There are, indeed, existing tools to survey and manage both direct and indirect effects of EIDs, however, these are usually insufficient or not translatable to marine ecosystems compared with their terrestrial counterparts. Because, of course, marine and terrestrial ecosystems have many fundamental and complex differences. Therefore, Glidden and authors essentially illustrate some of those differences, in their study, they highlight some organismal life histories (the patterns of survival and reproduction during the life of an organism) and marine environments present challenges – and opportunities – for marine disease assessment and management. They also brainstorm what it would look like to apply common (terrestrial) disease management strategies to marine systems, to try to understand if any of these can support in marine disease outbreak prevention, response, and recovery. They also recommend actions for future marine wildlife disease management via some unique interdisciplinary approaches.

There are three factors that contribute to an organism entering a state of being “diseased” and those are: pathogen dynamics (the dynamics of disease-causing micro- and macro-organisms), host susceptibility (the vulnerability f an organism to a disease), and environmental conditions. Each of these, together, make up the commonly known “disease triad” (Figure 1). However, the authors explain that in the case of marine diseases, pathogen transmission in water significantly differs from pathogen transmission via airborne methods. 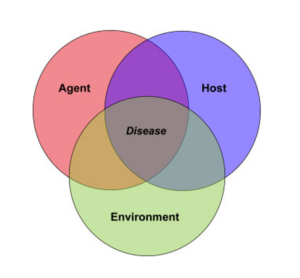 Movement of highly mobile pelagic larvae (planktonic larval stages that drift in the open ocean until they attain metamorphic competency) between populations has two potential outcomes for disease transmission: (1) transport can allow offspring to escape infected hotspots and (2) larvae can act as vectors, spreading pathogens to new communities. 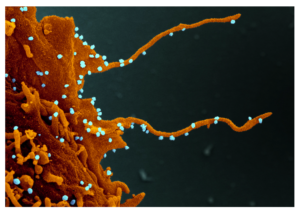 One other factor that the authors bring up is climate change. They state that due to anthropogenic climate change, organisms in marine and terrestrial environments are experiencing changing average temperatures and increased variability in local weather patterns. Furthermore, marine organisms are experiencing additional stressors such as hypoxia and ocean acidification. In fact, across systems, elevated temperatures can sometimes increase virulence, growth rates, reproductive window, and overwintering success of pathogens.

Then, the authors laid out a management plan:

(1b) reduce spillback (when a nonindigenous species is a competent host for a native parasite, with the presence of the additional host increasing disease impacts in native species),

(4b) captive breeding and reintroduction,

In summary, the authors state that the best kind of responses are predictive and proactive, and that proactive rather than reactive approaches to marine disease management are needed to avoid catastrophic population loss. They state that this approach will require a collaborative effort across academic institutions, federal agencies, and nonprofits. It will require people with expertise across disciplines spanning marine sciences, disease ecology, and veterinary medicine.

The authors encourage broad collaboration, and for marine managers to follow the lead of their terrestrial counterparts to proactively manage marine systems.

Krti is interested in the transmission dynamics of environmental diseases as they relate to climate and anthropogenic stressors. As a Fulbright Scholar, Krti conducted analyses on the responses of dengue fever to climatic stressors off the coast of the Bay of Bengal, in India. Currently, Krti works with Stanford University to understand the role of schistosomiasis in environmental reservoirs, and leads the pursuit of a computational-based based analysis of eelgrass wasting disease dynamics. At Stanford, Krti serves as one of the few trans-disciplinary experts for planetary health topics, via machine learning and computer vision, data science, environmental policy, and science communication. As a STEM innovator and a first-generation woman of color, Krti is proud to be a writer for Oceanbites!

Everything You Need to Know About Gray Whales