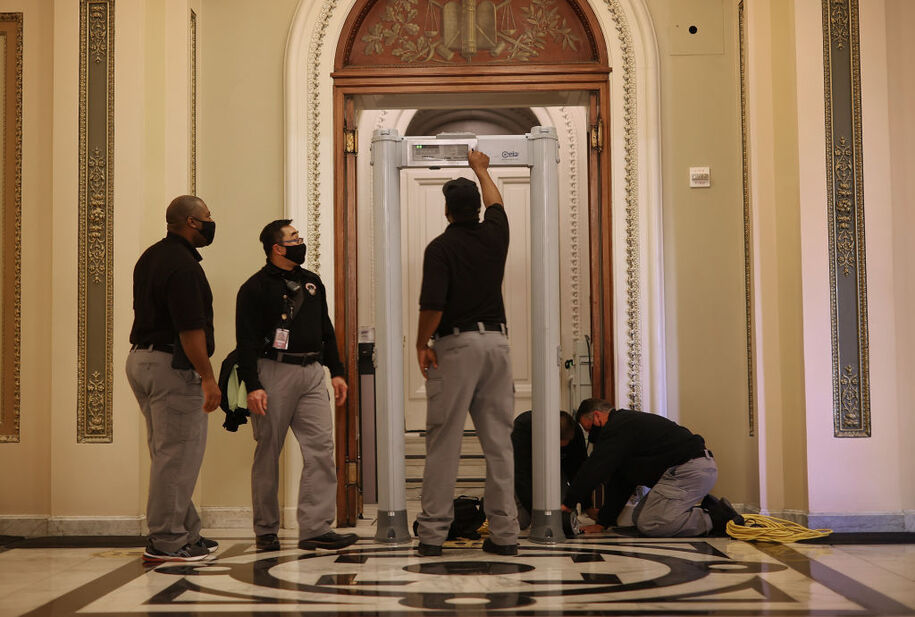 HuffPost reporter Matt Fuller witnessed and reported on those incidents and has been interviewed by Capitol Police about both altercations. Fuller outlines the events he witnessed and the information he gave to the police:

On Jan. 12, the night of the first votes after the U.S. Capitol insurrection and the decision to put magnetometers outside the House chamber, HuffPost observed Rep. Russ Fulcher (R-Idaho) roughly push his way past an officer who was operating the metal detectors. The best way to describe what Fulcher did was he “manhandled” the officer, a Black woman who was significantly smaller than the congressman …

HuffPost also … was a material witness to Harris trying to get another member who had just left the floor to hold his gun for him while Harris voted. Harris went through the magnetometer that day, set off the machine and then complied with a search with a metal detector wand. The police officer conducting the search located a gun on Harris’s side and had a hushed conversation with the congressman. Harris quickly turned back to the elevators, stood around for a moment in a small vestibule outside of the elevator banks and had another quiet conversation with a member. Harris’s comments were not audible, but HuffPost heard Rep. John Katko (R-N.Y.) reply, “I don’t have a license for that.”

Fuller confirmed with a Capitol official that Harris was indeed carrying a weapon, though he says that he did not see the gun. The concern for the Capitol Police, Fuller says based on the question, was that Harris’ gun was concealed. While members are allowed to have firearms in the Capitol complex, they are not allowed on the House floor. Further, anyone carrying concealed weapons anywhere in the District of Columbia is required to have a permit, even members of Congress.

The investigation into Harris was launched last month. At the time, his office issued a statement saying: “As a matter of public record, he has a Maryland Handgun Permit. And the congressman always complies with the House metal detectors and wanding. The Congressman has never carried a firearm on the House floor.” The police could be questioning Fuller now on this issue to determine whether Harris does have the necessary permits to have that firearm in Washington.

The Fulcher investigation is new news, though what instigated it is not clear and the Capitol Police aren’t saying. Fuller said he tried to interview the officer after the incident, “but she didn’t want to talk to the press. We did, however, observe that she appeared to be shaken from the interaction.” The day after the incident, and after Fuller’s tweets describing what he saw when viral, Fulcher tweeted: “The Capitol Police are heroes. I continue to support and thank them for their service,” but did not address the skirmish. He also lied, tweeting: “I am unaware of any rude interactions between members and capitol police.”

His office offered this statement to KTVB, NBC’s local affiliate in Boise: “We are not aware of any investigation or interest other than a social media tweet. Should there be further inquiries, we look forward to formally setting the record straight on these fabricated media accusations. However, please keep in mind in this majority-driven hostile political environment, neither truth nor fairness is the objective.”

Yeah, we already know he’s a liar. He and Harris are also among the sedition caucus, the 147 Republicans who voted to overturn election results even after the attack on the Capitol Jan. 6.