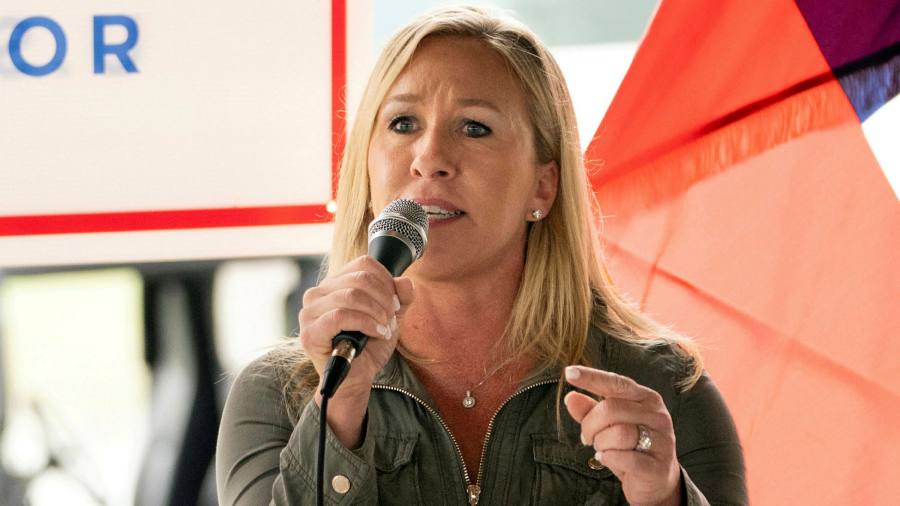 The US House of Representatives will vote on Thursday on a resolution to strip Marjorie Taylor Greene of her committee assignments as scrutiny intensifies over the Republican lawmaker’s comments on everything from QAnon to school shootings.

The vote will probably result in the first-term representative being removed from the House education and labour committee and the House budget committee. The lower chamber of Congress is controlled by Democrats, many of whom have expressed outrage over her record of expounding conspiracy theories.

Ms Greene, who was elected in November, is among the most vocal new members of Congress. She has already proved to be a thorn in the side of Republican leadership — one day after Joe Biden was sworn in as president, she said she was introducing articles of impeachment against him, but received no support from her GOP colleagues.

Calls mounted this week for Ms Greene to be removed from the education committee, after it was reported that she had described a shooting at the Marjory Stoneman Douglas High School in Parkland, Florida, as a “false flag” operation in a 2018 Facebook post. Seventeen people died in the shooting.

Ms Greene had also claimed on social media that the 2012 Sandy Hook Elementary School shooting was a “false flag” orchestrated to increase restrictions on gun ownership. Twenty-six people died in that shooting, including 20 children.

Mr Hoyer said after the call that it was “clear there is no alternative to holding a floor vote on the resolution to remove Rep Greene from her committee assignments” and that the House would vote on the matter on Thursday.

A spokesperson for Mr McCarthy said: “Leader McCarthy will address this with members later today.”

Later on Wednesday, Nancy Pelosi, the Democratic House speaker, said her party would press ahead with the vote on Thursday “after several conversations” with Mr McCarthy, in which he had “made clear that he is refusing to take action against” Ms Greene.

She added: “As a result, the House will continue with a vote to strip Greene of her seat[s]. McCarthy’s failure to lead his party effectively hands the keys over to Greene, an anti-Semite, QAnon adherent and 9/11 Truther.”

The House minority leader met with Ms Greene on Tuesday evening, and later held crunch talks with his leadership team but made no firm decision on how to proceed. House Republicans are expected to meet again on Wednesday to debate whether to remove Liz Cheney, the Wyoming Republican, from the party’s leadership over her support for impeaching Donald Trump.

After several conversations and literally running away from reporters, Minority Leader Kevin McCarthy (Q-CA) made clear that he is refusing to take action against conspiracy theorist Rep. Marjorie Taylor Greene. As a result, the House will continue with a vote to strip Greene of her seat

Ms Greene on Wednesday sought to raise money off the back of efforts to censure her, telling supporters in a fundraising email: “Never before has a Republican been under attack like me since the Democrats tried to impeach and remove President Trump from office.”

Ms Greene represents Georgia’s 14th congressional district, a rural and exurban area in the north-west of the state. As one of more than 200 House Republicans and one of the most junior members of Congress, she does not exert formal power over the congressional party.

But many senior members of the GOP have sought to distance themselves from her in recent days amid concerns that she will use the national stage to make a name for herself and define the party’s brand in the post-Trump era. House Democrats have already said they intend to label Republicans as the party of conspiracy theories and QAnon heading into the 2022 midterm elections.

Morning Consult figures published on Wednesday showed 46 per cent of voters nationwide had views on Ms Greene, up 21 points since August of last year, making her among the most recognisable new members of Congress.

Mitch McConnell, the Senate’s top Republican, earlier this week released a statement declaring that “loony lies and conspiracy theories” were a “cancer” on the GOP, without mentioning Ms Greene by name.

“Somebody who’s suggested that perhaps no aeroplane hit the Pentagon on 9/11, that horrifying school shootings were pre-staged, and that the Clintons crashed JFK Jr’s aeroplane is not living in reality,” Mr McConnell said in a statement to The Hill newspaper.

The supply chain crisis and US ports: ‘Disruption on top of disruption’

The Best Watch Gift to Give in 2021: 33 Affordable Ticker for Every Guy on Your Gift List (Including Yourself)

Can An App Help Save Sharks?