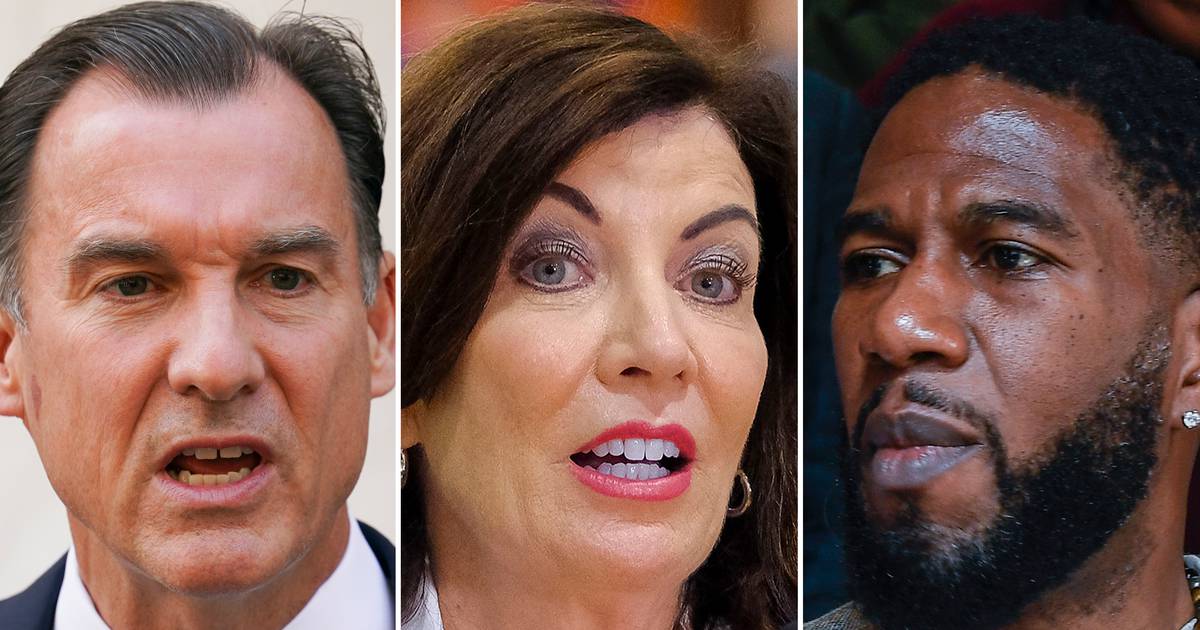 ALBANY — Gov. Hochul’s primary opponents finally got the chance Tuesday to press the incumbent Democrat on a host of issues including crime, bail and her 11th hour Bills stadium deal.

Rep. Tom Suozzi (D-L.I.) and New York City Public Advocate Jumaane Williams went toe-to-toe with Hochul as the trio sparred and attempted to appeal directly to voters during a primetime debate with only three weeks remaining ahead of the June 28 primary.

Right out of the gate, both William and Suozzi went after Hochul over recently signed gun laws and the Buffalo native’s past endorsements from the National Rifle Association.

Williams took a dig at Hochul by referencing disgraced former Gov. Andrew Cuomo, arguing the new gun laws will do little to stem gun violence in the city and other parts of the state.

“It reminded me of the Cuomo press conferences during the pandemic – and I’ll tell you why,’ he said. “It was in the middle of the Bronx that has some of the highest shootings that we’ve seen.”

Hochul, who did not attend a separate debate last week that featured just Suozzi and Williams, defended her record and said she’s proud of what she’s been able to get done since taking over for Cuomo last year.

“I’ve only been governor for nine months, I got it done in record time,” she said of recently enacted laws, including raising the age to purchase semi-automatic rifles to 21.

Hochul was also repeatedly forced to defend a taxpayer funded deal for a new stadium for the Buffalo Bills that was included as part of the state budget.

“I understand people questioning this,” Hochul said, adding that “the Buffalo Bills is the identity of Western New York the way Broadway is to New York City.”

She said $850 million going toward the stadium was the best deal she could broker for taxpayers.

Hochul, who has outraised her opponents by millions and is considered the frontrunner in most polls, is seeking a full term in office after replacing Cuomo last summer.

Cuomo, who was facing impeachment, resigned in disgrace following a series of sexual misconduct allegations. Hochul, as lieutenant governor, stepped up and became the first woman to lead the Empire State.

Suozzi has staked out a position as a moderate Democrat with past executive experience as Nassau County executive. He hammered Hochul over her initial pick for lieutenant governor, Brian Benjamin, who resigned after being arrested on federal bribery charges earlier this year.

He also lamented what some described as a secretive budget process under the Hochul administration and the fact that “we are the most corrupt state in the United States of America.”

The governor said she was “disappointed” and called Benjamin’s indictment “a setback” before touting newly installed Lt. Gov. Antonio Delgado.

Suozzi, asked about congestion pricing in Manhattan, pivoted to what he believes is keeping people from returning to the city.

“Crime is the number one issue,” he said, charging Hochul “didn’t engage” in fighting for further bail reforms.

A Siena Poll released earlier Tuesday showed three out of four city residents are concerned about becoming a victim of a violent crime.

Williams, who ran against Hochul in the 2018 Democratic primary for lieutenant governor, is a progressive darling running on the governor’s left flank.

Both Suozzi and Williams also lamented the fact that the Legislature failed to pass a constitutional amendment that would enshrine the right to abortion and civil rights protections based on sex, gender orientation or expression, disability, and other categories despite Hochul touting support in ads.

A second debate between the three Dem candidates is scheduled for next week.