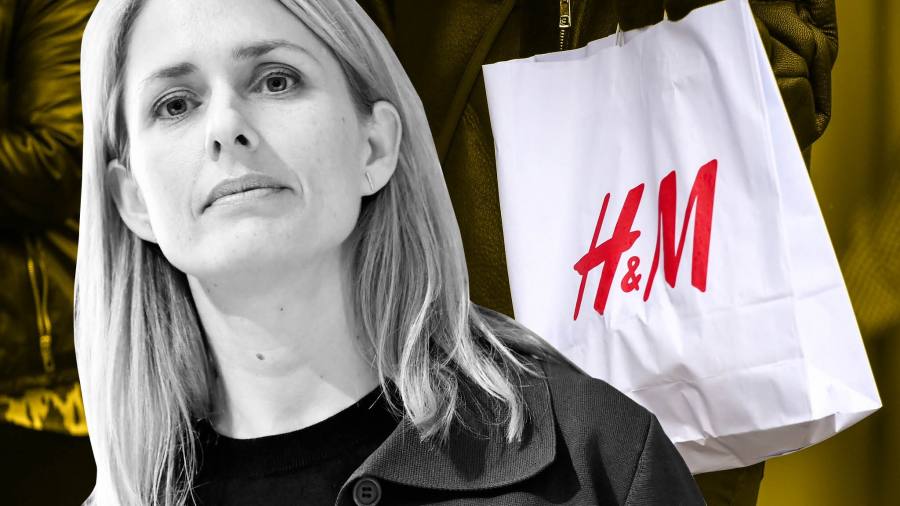 The Hennes & Mauritz flagship store on Stockholm’s main square is trying to break the mould. A woman sewing a patch on to trousers, party dresses for hire and a beauty salon are not standard fare for most fast-fashion outlets.

But the services could be a taste of things to come as H&M, the world’s second-largest clothes retailer, works out what to do with its vast network of 5,000 stores following a pandemic that has pushed more shoppers online. The Swedish chain’s ideas extend as far as examining whether its shops can play a role in the logistics of online selling.

For Helena Helmersson, appointed last year as the first H&M chief executive outside the company’s founding Persson family, it is all about boosting relationships and engagement with customers.

“The physical store network that we have is one of our strengths. It’s the different roles the stores can play, the different formats. What kind of experiences are there in a store? Could they be part of an online supply chain? There are so many things to explore . . . it’s almost thrilling,” she told the Financial Times.

Helmersson, 47, has had a tough first year as chief executive. At the height of the first wave of the Covid-19 pandemic, four-fifths of H&M’s physical stores were closed and a big push online was unable to offset the hit. Sales fell a fifth in H&M’s financial year until the end of November to SKr187bn ($22.6bn), while pre-tax profits plunged 88 per cent to SKr1.2bn, interrupting a nascent recovery after years of decline.

Sales plunged in March and April, before rebounding strongly in the summer, and then getting hit again around Christmas.

But as the pandemic has forced H&M into speedier decision-making and increased flexibility and with Helmersson forecasting a wave of pent-up demand when Covid-19 comes under control, the chief executive is emboldened to say: “Overall, we will come out of the pandemic stronger.”

Anne Critchlow, analyst at Société Générale, said that relatively small increases in sales at H&M could lead to bigger rises in profits. “Potential recovery is part of the attraction of H&M to investors at the moment: it’s very highly operationally geared. H&M should be the fastest to recover,” she added.

But she argued that Inditex, the Spanish owner of Zara that overtook H&M as the world’s biggest fashion retailer by sales a decade ago, was a “better quality company”, and that the Swedish group may be a “bit slower” at returning to its pre-pandemic profit levels as some customers steer clear of its stores.

H&M’s shares fell consistently from 2015 to 2018, before largely treading water since then, although they have climbed 50 per cent since their Covid-19 low in March last year.

Helmersson, a H&M lifer who joined the retailer in 1997 as an economist, said she started to see “light at the end of the tunnel” after a “very demanding” period. “I have super-high expectations on myself. Adding a crisis on top of that, it’s been a really tough year.”

Now, however, her focus is moving to a critical question for H&M: “Where do we need to move faster?”

Despite being in fast fashion, critics said H&M had become slow, outpaced by nimbler Inditex and online retailers such as Zalando and Asos. Inditex could get new clothes to Zara stores in weeks from nearby manufacturing sites in Europe while H&M, with more sourcing in Asia, took longer. Opening new stores gave the Swedish group an easy path to sales growth but did not help its profit margins, which have been declining consistently for the past decade.

Helmersson said H&M took “really, really fast decisions” at the start of the pandemic on how it bought garments, worked with its supply chain, and moved to selling more online. She pointed to how technology allowed designers, suppliers and the production office to work together at the same time to produce new clothes, rather than waiting for one to send a garment to another.

“It sounds really basic but if you do that in many processes you can be much faster. You also have data to give you more customer insight, which means you can act much quicker,” she said, adding that accessories can now go from conception to store in a few weeks, T-shirts in six weeks, and trousers in eight.

H&M is also trying to increase its speed on sustainability, bringing in a target of using 30 per cent recycled materials by 2025. Critchlow said that the group was leading the industry in its attempts to become circular, although many voice concerns over how much fast-fashion groups encourage excess consumption. Strong investor demand this month led to H&M reducing the interest rate for its maiden sustainability-linked bond, which was 7.6 times oversubscribed

Helmersson, a former head of sustainability at H&M, said that the hardest task for the retailer was decoupling its growth from its use of natural resources. She added that the trials in repairing and renting clothes as well as selling second-hand garments through the website Sellpy, in which H&M is the majority owner, were important but difficult to gauge how big they could become. “We have such a size that we can to some extent influence customer behaviour. But we will also see how willing they are,” she added.

Critchlow said H&M deserved “full credit” for the trials but that they were unlikely to lead to soaring profit margins. She added that the crucial questions were how fast H&M returned to pre-pandemic sales and profit levels and whether it could go further. “It requires H&M to manage the costs of the stores,” she said, adding that renegotiated leases during the pandemic had only helped a little.

There is also a debate about how much increasing online sales — expected to rise from 28 per cent of H&M’s total last year to about 43 per cent in 2025, according to Critchlow — help given that they come with additional costs such as delivery and returns as well as in logistics.

Helmersson is unbowed, arguing that H&M will offer multiple ways for customers to engage with the retailer through various store formats offering different services, online, and its own club. “The customer journey is constantly evolving,” she said. “We will follow, and influence. Before, it was about transactions, now it’s about relationships with customers.”