His New Job on the Line, This President Unleashed a Scorched-Earth Critique of His Old Campus 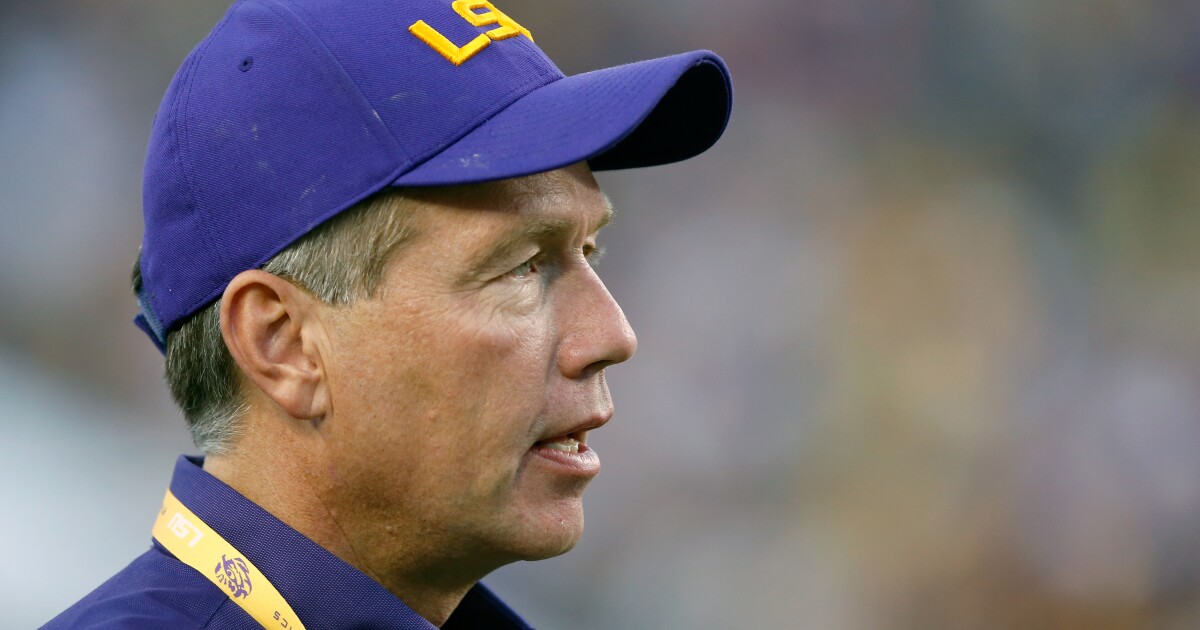 With his presidency imperiled at Oregon State University, F. King Alexander on Wednesday blasted his former employer, Louisiana State University, casting the institution he had once led as a hidebound organization where he felt powerless to fire the football coach without the approval of a board that regularly intervened in athletics.

Alexander’s unusually critical assessment of a former employer, where he was president from 2013 to 2019, comes in the wake of damning revelations about Louisiana State’s past handling of sexual-harassment and sexual-assault cases, including allegations of sexual misconduct that were made against Les Miles, who was head football coach during Alexander’s tenure. (LSU fired Miles in 2016).

Oregon State’s Board of Trustees, questioning the conduct of Alexander at Louisiana State, voted on Wednesday to put him on probation as president through June 1. But not before Alexander, in a meeting of the trustees where his presidency appeared to be on the line, publicly slammed Louisiana State, suggesting that some of the most disparaging stereotypes that often get attached to the big-time, Southern football schools are, in LSU’s case, all too accurate.

“We are not going to comment on President Alexander’s remarks,” Ballard wrote in an email, “nor are we going to let them divert our attention from our top priority of making LSU a safe and welcoming community for all students.”

Here are a few of the most damaging claims Alexander leveled at Louisiana State:

The governing board dominated athletics issues.

Alexander portrayed LSU’s Board of Supervisors as deeply involved in major athletics decisions, suggesting that Louisiana State’s president can only recommend whether to fire a football coach.

“The board has to make the ultimate decision on an issue of this magnitude,” Alexander said.

Following an investigation into Miles’s alleged misconduct, the board had decided, two months prior to Alexander’s arrival at LSU, to retain Miles as football coach, Alexander said. The board, Alexander said, “explained it to me in my first week of walking in there.”

Given the timing, Alexander said, “It would have been very difficult to override the board, who has already heard from their investigation.”

An outside investigation, described in a law firm’s 2013 report that was recently made public by USA Today, recounted allegations that Miles had, among other transgressions, kissed a student and suggested they go to a hotel. Taylor Porter, the law firm, did not find that Miles had a sexual relationship with any of the women who complained, but the investigation concluded his behavior was inappropriate. Miles has denied kissing the student. This month, in the wake of the allegations being made public, Miles “mutually agreed to part ways” with the University of Kansas, where he was coach.

Practically speaking, firing a football coach in a Power Five conference isn’t going to happen without board consultation. But Alexander’s suggestion that, at LSU, the final decision over a coach’s employment rests with the board suggests a power dynamic likely to trouble governance experts.

“Unlike here,” Alexander said of Oregon State, “there is a great deal of board intervention into athletics.”

Miles was not a good “university citizen.”

When criticizing football coaches, college presidents tend to confine their remarks to wins and losses or off-field scandals. Alexander’s criticisms of Miles cut deeper, blasting the former coach as “not a good university citizen.”

Specifically, Alexander criticized Miles for refusing to send football players to help first-year students move into dormitories, something that all other LSU coaches directed their players to do.

“I had to make him send them,” Alexander said.

In another example, Alexander said, Miles objected to the university’s constructing a foundation building near athletics practice fields.

“Les Miles went nuts and said, ‘How can you dare build this on my side of campus?’” Alexander said.

There were no other sexual-misconduct allegations made against Miles during Alexander’s tenure, Alexander said, but Miles had another problem: “He believed he was bigger than life.”

Some Title IX cases were “siloed” in athletics.

At issue for Louisiana State is whether allegations of sexual misconduct or violence were swept under the rug by the athletics department. Asked about this, Alexander said, the vast majority of cases were either reported to the Title IX office or campus police. “A couple of them,” he said, “for some reason were handled differently by athletics.”

Alexander estimated that “they were siloing maybe 6 or 7 percent — and that’s just a guess.”

“We had to further clarify in athletics over and over again,” Alexander said, “that you need to report to the Title IX office and not to anybody in athletics.”

Louisiana’s disinvestment in public higher ed has been well-chronicled. But Alexander portrayed administrators as desperate for new revenue from donors and the athletic department while the campus fought with the Legislature for scraps.

Alexander told trustees that while the university was struggling financially, he “talked athletics into” giving $8 million to the general university fund one year because the department ran a surplus. (That practice has since ended.)

The president added that he had “no doubt” that some of the money from athletics allowed the university to start the Title IX office and fund it, as well as “eke out” a small salary increase for faculty and staff one year.

He faced blowback for suspending activities in the Greek system.

In 2017, Alexander ordered the immediate suspension of all fraternity and sorority activities at LSU after the hazing death of a student. On Wednesday, he said that decision proved costly behind the scenes.

Alexander referenced “the pressure I caught from shutting down the Greek system for a year.” The president said the step cost the university “millions in donations” from alumni of the Greek system.

“They thought we overstepped our bounds, and [that] we took drastic action when we shouldn’t have.”

Alexander also referenced hearing about “rampant problems” inside fraternities during his tenure at LSU, including “drugging drinks” and other things “flying under the radar.” (He said the administration was able to substantiate some of the claims but not others.)

Those things and other “rumors,” Alexander said, were enough to — when paired with the student’s hazing death — justify the temporary shuttering of the Greek system. It was, he said, a “drastic action that received national headlines that we didn’t want to have to take.”

Uncommon in both its candor and abrasiveness, Alexander’s scorched-earth assessment of Louisiana State’s athletics culture, governance challenges, and budget constraints could have lasting implications. At a time when LSU is in the midst of a presidential search, the university’s immediate past leader has given an unexpected public exit interview that points toward deeply rooted dysfunction that could test even the steeliest president’s resolve.

The criticisms could well be seen as an effort by Alexander, facing his own reckoning at Oregon State, to shift blame toward institutional intransigence in Louisiana. There is something fundamentally different and potentially lasting, though, about what Alexander said on Wednesday. Well into a career, it is not uncommon for a college leader, in a public forum, to vaguely criticize some unnamed past institution — Oh, I could tell you some stories. Usually, though, they don’t name names.