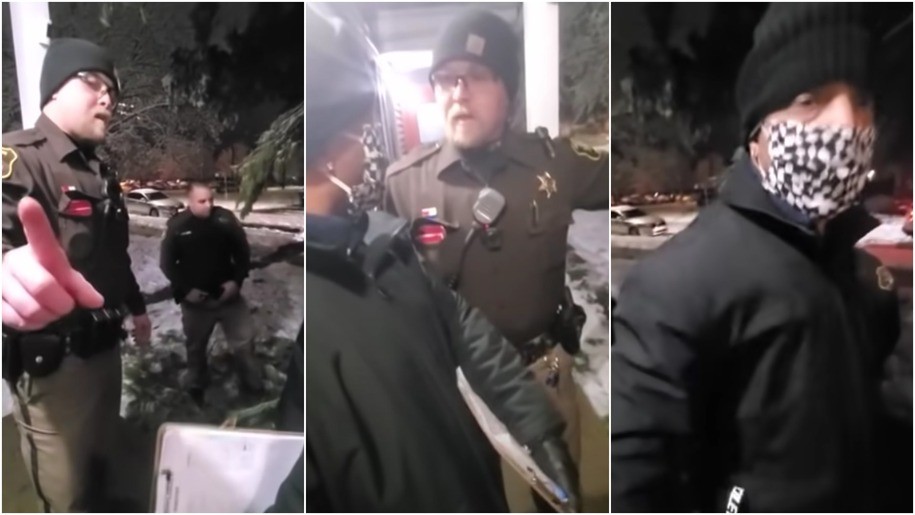 “So you don’t even know what I’m doing?” Marshall asked and told the witness, another area resident, to keep recording. Marshall explained to the deputies that he hadn’t asked anyone for money. When one of them asked Marshall what he was collecting signatures for, he said “it doesn’t matter.” The deputy responded: “It does matter.” Then, he changed lanes and instead asked Marshall for his ID. “If you fail to identify yourself you’re gonna go to jail,” the deputy said. That isn’t exactly in accordance with Michigan law. “In the State of Michigan, there is no Stop and ID law. That means a police officer can’t demand to see your identification unless they have reasonable suspicion that a crime has been committed,” the Christopher Trainor & Associates law firm stated on its website. Marshall has hired an attorney, who contends this was a clear case of racial profiling, M Live reported.

In the video of the encounter, the woman recording repeatedly vouched for Marshall, explaining he’s done nothing wrong. “We have the right to petition in this country,” she said. The explanation didn’t stop the deputy from asking Marshall to put his hands behind his back. When the witness asked for the deputy’s badge number, he held his pointer finger up in her face and said: “Nobody’s talking to you.” The deputy demanded that Marshall turn around and put his hands behind his back. “What am I getting arrested for?” Marshall asked. The deputy responded: “hindering and opposing.”

Prosecutors ultimately dropped charges filed against Marshall, M Live reported. Calhoun County Sheriff Steven Hinkley initially placed the former deputy on administrative leave and asked at a news conference on January 6 for “patience” as officials completed their investigation. Although he later changed his tune, Hinkley tried his best to pin the incident on Marshall during the news conference. “Although that caller initially thought that that activity was illegal, when the deputy made contact with the individual in this case, it appears he may have been acting on ordinances that were valid in other communities and not this particular community,” Hinkley said.

The sheriff took a more definitive stance in a statement with Undersheriff Timothy Hurtt on Friday. “We hold ourselves to high standards of professionalism to the communities we protect,” the officials said. “When we are right, we are right. When we are wrong, we admit we are wrong. On January 2, we were wrong.”

The sheriff’s office has yet to identify the terminated deputy, civil rights attorney Ben Crump tweeted Monday. “CCSO fired the deputy but won’t release his name. THIS is how bad cops get rehired by other agencies!”