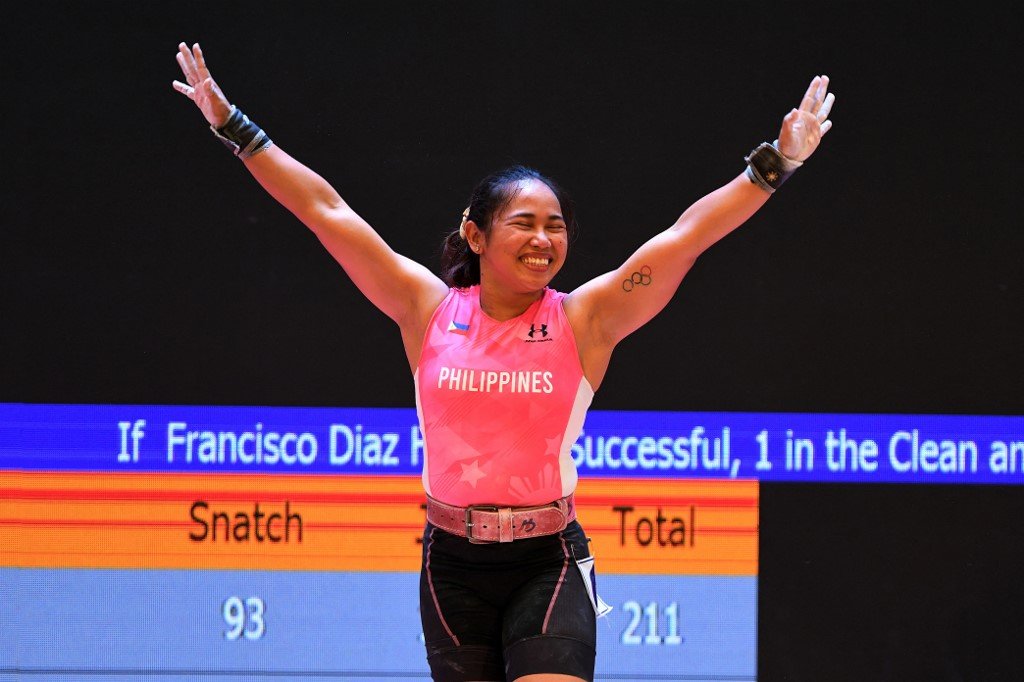 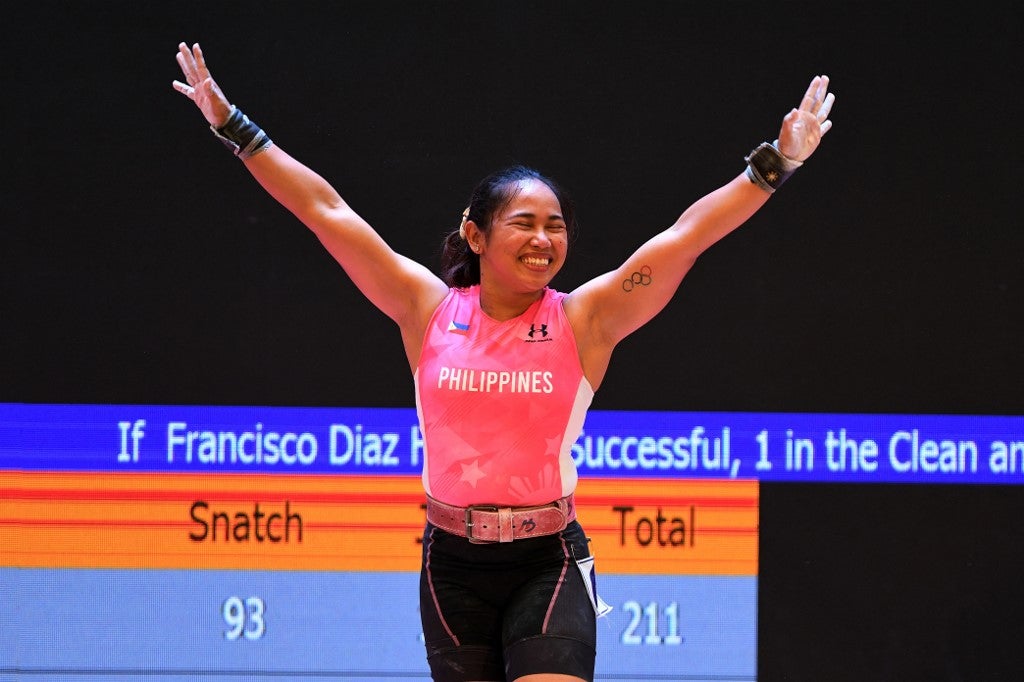 Philippines’ Hidilyn Diaz celebrates as she wins gold in the women’s 55kg weightlifting event during the 31st Southeast Asian Games (SEA Games) in Hanoi on May 20, 2022. (Photo by Tang Chhin Sothy and TANG CHHIN SOTHY / AFP)

HANOI—There was a brief moment when everyone held their breath at a jampacked Hanoi Sports Palace. In a battle of Olympic champions, Thailand’s Sanikun Tanasan built a slight advantage early in the women’s weightlifting final of the 31st Southeast Asian Games.

The only one not jittery?

“I was really confident because we’ve been studying my opponent so we know she’s strong in snatch but in clean and jerk, no,” said the country’s first and only Olympic gold medalist on Friday.

Tanasan, a gold winner in the 2016 Summer Games in Rio de Janeiro, carried the heavier weight in snatch, lifting 93 kilograms to Diaz’s 92. But when the clean and jerk came, Diaz showed she was still the queen of the 55kg weight class by lifting 114kg to win the gold medal with a 206kg total.

It wasn’t the same show that Diaz put on in the Tokyo Olympics, but it was enough to kickstart the 31-year-old champion’s trek toward the Paris 2024 Olympics.

“For me it’s okay. I’m happy to be back again training and, you know, being in competition again,” said Diaz.

“I always want to do my best; she’s an Olympic [gold] medalist and we had to strategize everything,” she added.

Tanasan, who won the 48kg crown in Brazil but climbed to a heavier division to chase Diaz, lifted 104 and 110 in the clean and jerk. She finished with a silver, 3kg short of the top prize.

Samahang Weightlifting ng Pilipinas president Monico Puentevella said that even as the federation has lined up potential heirs, Diaz “will remain the Philippine weightlifting’s heart and soul.”

And there is hope that Diaz’s gold will pump life back into a Philippine campaign that has slowed in the last couple of days. Team Philippines is setting its sights on a third or fourth place finish in the overall standings even as it slipped to fifth as of 7 p.m. Friday.

“We still have a bulk [of golds to expect,” said Philippine Olympic Committee president Abraham “Bambol” Tolentino. “Singapore has no more.”

“If we all work hard as one, we will win as one,” said commissioner Mon Fernandez of the Philippine Sports Commission, who has been diligently attending to the athletes’ in his capacity as chef de mission. “This is not the time for us to be discouraged since reclaiming No. 3 is still very much possible.”

Friday’s golds came in trickles, but they helped nonetheless.

In the late afternoon at Hoai Duc Gymnasium, Shugen Nakano defended his men’s 66kg title for the country’s third gold medal of the day.

Nakano was almost robbed of the gold as the referee failed to stop the fight even after time had ran out. At that moment, Nakano, leading 1-0, was in an arm-lock by Hoang Phuc Troung of Vietnam.

“Had we not reacted, the referee wouldn’t have called it. Maybe he was waiting for our boy to tap out which he didn’t do. Shugen just endured it up until the match was called,” said Philippine Judo Association president Dave Carter.