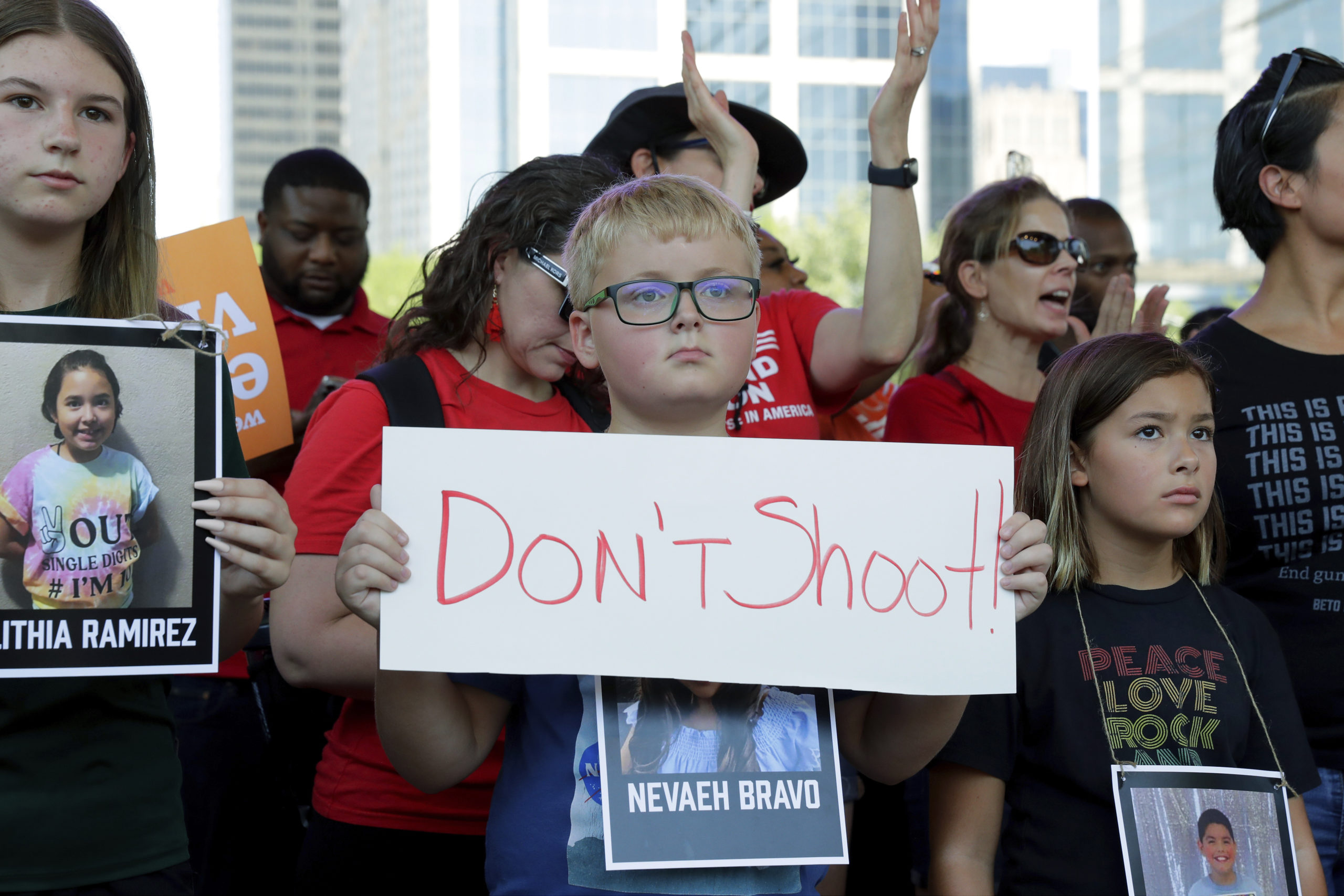 The rage was palpable.

Hundreds of protesters heckled attendees across the street at the 2022 National Rifle Association Annual Meeting in Houston Friday. One demonstrator climbed onto the roof of a parking garage overlooking the demonstrators and shouted, “Where’s Abbott?” before the police ordered him down. Young and diverse, about 200 protestors exclaimed: “shame” and “kids, not guns” at the NRA members milling about who were, for the most part, white men over fifty. Above the George R. Brown Convention Center entrance, an NRA banner read “14 Acres of Guns & Gear.”

The city of Houston set up protest and counterprotest areas, where the anti-gun crowd outnumbered the gun-lovers, who had no signs, ten to one. One man circled Discovery Green park in a truck flying Trump and “Fuck Joe Biden” flags.

Katie Okhuysen, 26, is a student in Houston. She came to Houston with her friends to the protest because she felt helpless to stop the mass murder and the politicians who have cut and blocked gun regulations, namely Governor Greg Abbott and U.S. Senator Ted Cruz.

“What they say is nonsensical. More guns don’t mean safer,” Okhuysen said. “The threads have been picked out slowly, unraveling the whole thing. We’ve seen this coming. It can seem futile to protest, but I have to translate how I feel into action. I can’t be at home upset all by myself.”

Protestors’ message was clear: Stop sales of high-powered, semi-automatic long guns that have slaughtered tens of thousands of people and made the United States the mass murder capital of the world. It is a message the Republican lawmakers who rule Texas choose not to understand.

As the grim details dripped out from hundreds of reporters in Uvalde, entertainers dropped out of the NRA event. The company that reportedly made the weapon used by the Uvalde shooter decided to cancel its appearance at the convention.

After days of disseminating falsehoods, the head of the Texas Department of Public Safety came clean, telling reporters Friday that police on the scene “made the wrong decision” in responding to the Uvalde shooting that left 21 people dead and 17 wounded. The biggest mistake among many was the order by the officer-in-charge to wait for backup instead of taking the shooter out as quickly as possible, which has been the standard policy since the Columbine massacre more than two decades ago.

Moments after Margarete Neale, a blue-eyed school librarian from Denton, parked her car, a bald man accosted her as she walked to the protest in downtown Houston. He asked to see her sign—“25+ years as a School Librarian & Books are the Problem?”—then said we can’t get rid of guns.

“Tell that to the nineteen dead kids,” Neale said.

“I anticipated that,” Neale said. “I’ve been an active protestor. The opposition’s violence is exhausting.”

After praying, Lieutenant Governor Dan Patrick said that, after praying, he had decided not to attend the NRA meeting. Governor Abbott—who, along with Attorney General Ken Paxton, has called for teachers to be armed—chose not to go in person but addressed the gun enthusiast by taped message.

Senator Ted Cruz, on the other hand, fulfilled his timeslot. He blamed the Uvalde murders on the “evil” perpetrator and name-checked all the usual social ills—broken households, mental illnesses, school doors—that those on the right instantaneously seem to care about in the wake of mass murder. When it comes to the causes of gun violence, they ignore the common denominator: the gun, in this case, the military-grade weapons and high-capacity magazines available to the public.

“The elites who dominate our culture tell us the firearms lie at the heart of the problem,” Cruz said. “Many of these same people make their accusations from behind great bulwarks of safety. From gated communities equipped with private security, or at the very least from safe and expensive neighborhoods protected by high home prices and low crime rates. Such people can afford an indulgent ideology that ignores reality.”

Instead of confronting the problem of guns, the NRA and its allies instead focus on “hardening soft targets,” asking the public to accept their deadly weapons as a modern fact of life. The U.S. has approximately 400 million guns in circulation. No other country has more guns than people.

Rocelious Peoples, a 28-year-old security guard who wore a ballistic vest with armor, had brought along a first aid kit, a trauma pack with Quick Clot gauze inside, and a Glock pistol to protect protesters from right-wing extremists and police.

“I’m here to make sure nothing happens to my people,” he said, adding he came in solidarity with the children in Uvalde. He was outraged that the Buffalo shooting only two weeks ago already seemed to have been forgotten.

“It’s not one incident outweighs the other, but Buffalo took the lives of ten people in the Black community,” he said. “There’s a reason to defend yourself. As a Black male, I could be slain at any time.”

Peoples said that community security and armed residents who know each other—not police—are the answer to school shootings.

Thanks to lax Texas gun laws, the killer in Uvalde legally bought his high-power weapon, a thousand rounds of ammunition, and more than 30 magazines within days of his 18th birthday.

Texas is also one of the biggest suppliers of weapons to Mexican gangs, helping fuel the out-of-control warfare in that country. The violence perpetrated by Texas gun culture south of the border, in turn, pushes migrants north across the Rio Grande. There is no question that when the assault weapons ban expired in 2004, mass shootings rose dramatically in the U.S. In 2020, according to Centers for Disease Control and Prevention data, firearms became the leading cause of death for American children.

However, for other protesters, neither more guns in the hands of private citizens nor gun-carrying officers in school will help.

“Hell no, I don’t feel safe with a resource officer in the school,” Neale said.

Neale sat in the muggy shade with her dog Mojo Bones after listening to Beto O’Rourke speak. In her district, administrators have increased training for mass shootings every year since 1998, the year of the Columbine massacre. She doesn’t believe guns belong in schools.

“Republicans refuse to see reality,” she said. “I don’t know how you can say you’re a Republican with any dignity.”