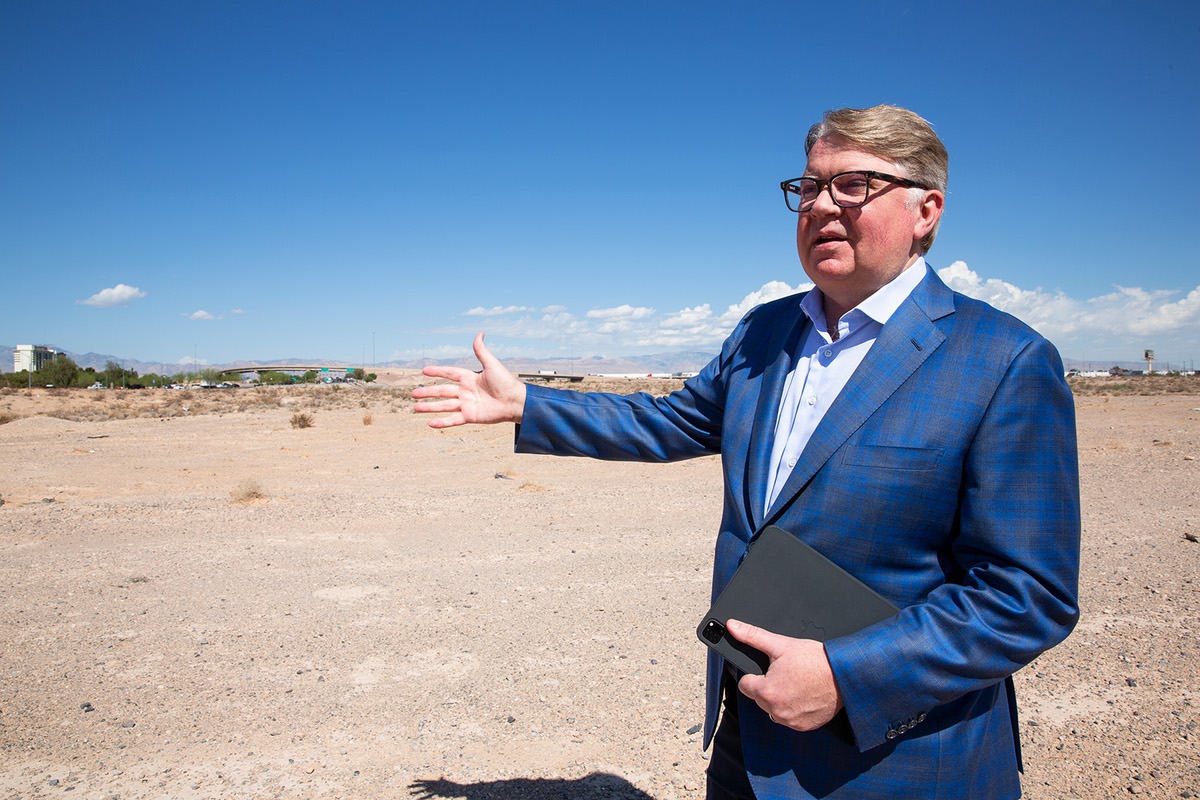 Randy Morton, president for Oak View Group Las Vegas, stands on large plot of land on the corner of Las Vegas Boulevard and Blue Diamond Road, Thursday June 23, 2022, where they will break ground on a new casino resort and arena.

When Randy Morton looks over an empty lot south of the Strip, he sees more than water-starved bushes, dirt and rocks. The longtime Las Vegas casino executive envisions the NBA’s newest arena packed with fans.

Morton and a group of high-powered businessmen from Las Vegas and California have plans for a privately financed $3 billion sports arena and entertainment district near the intersection of Las Vegas Boulevard and Blue Diamond Road.

The build-out will include a hotel-casino and amphitheater, along with a “world class” arena that could eventually be home to a Las Vegas professional basketball franchise.

“It’s a beautiful piece of land,” Morton said. “There is direct access to Interstate 15 and access to the 215 (Beltway). I was aware of this project from an article that came out in the spring, and I was very intrigued when I was approached.”

Oak View Group, a Southern California-based investment firm that specializes in the sports and entertainment industries, is behind the planned development. It was Oak View CEO Tim Leiweke who recruited Morton — a longtime executive at the Bellagio — for the new role he started this month.

In a statement about the project, Leiweke said the area where the development is slated to go represented “one of the few areas of potential future growth of the gaming and entertainment corridor” in Las Vegas.

Earlier this year, Oak View Group bought about 66 acres of land near Blue Diamond Road and Las Vegas Boulevard — about 3 miles north of South Point — for just under $100 million, according to Clark County records.

The group that Oak View put in place to see the project through includes former Las Vegas Raiders president Marc Badain. He was one of the most publicly visible point people for the planning of Allegiant Stadium, the $2 billion, 65,000-seat, domed stadium west of the Strip.

“With any large project, the most important thing is land acquisition,” said Badain, who spent three decades in the Raiders organization before resigning nearly a year ago. “Anyone can have an idea and have renderings drawn up, but all you have is pictures until you have the dirt. The first thing we set out to do was to acquire a piece of property. We were aggressive with that, and we were, ultimately, successful.”

The group has been tight-lipped about the specifics of what the arena could look like — they have not provided renderings — but said it would be about 850,000 square feet and that the complex would host concerts and meetings. An additional entertainment district is planned to sit on 25 acres.

Badain said the project differs from Allegiant Stadium because there were no plans to use public money. For the stadium, a hotel tax was levied to help pay for the facility.

“A lot of times, builders of projects like this talk about ancillary development that would follow, but we have the benefit of doing both at once,” Badain said. “Putting in a hotel and casino at the same time, that’s exciting. That’s Tim’s vision and with Randy, with his experience, now a part of the team, that took this to a whole new level.”

Asked about the possibility of an NBA team playing at the arena, Badain didn’t shy away from the question but also made it clear that the project was not contingent on that happening.

Las Vegas and Seattle have long been rumored to be on a short list for potential expansion of the NBA’s current lineup of 30 teams, although nothing is imminent, Commissioner Adam Silver said three weeks ago ahead of the NBA Finals.

“Those are wonderful markets,” Silver said in a news conference. “Again, as I’ve said before, we were in Seattle. I’m sorry we are no longer there. We have a WNBA team in Seattle in an almost brand-new building that’s doing spectacular. And Las Vegas, where we will be at our Summer League in July, has shown itself to be a great sports market as well.”

He stressed “there are people talking who are not at the league office about us potentially expanding after the 2024 season. We are not discussing that at this time. As I said before, at some point, this league invariably will expand, but it’s not at this moment that we are discussing it.”

Badain also said it’s not in his place to comment on a potential move by the NBA.

Largely aided by the construction of Allegiant Stadium — which is set to host the Super Bowl in 2024 — Las Vegas tourism officials have pounced in recent years on the idea that the city was a sports tourism mecca.

The Las Vegas Convention and Visitors Authority has spent heavily on ad campaigns that aim to brand the city as the “Sports Capital of the World” and “The Greatest Arena on Earth.”

Lori Nelson-Kraft, senior vice president of communications for the LVCVA, said in a statement that all new entertainment venues represented “great additions” to the region.

“Tim Leiweke has a proven track record and is assembling a team of seasoned executives to help shape what appears to be an exciting venture,” Nelson-Kraft said. “We look forward to learning more about Oak View Group’s plans to join the Greatest Arena on Earth.”

“The key piece of real estate for this project represents one of the most important parcels within the Las Vegas Valley,” Bauman said. “The site is extremely attractive for a major commercial development due to its location and address along Las Vegas Boulevard, access to nearby freeway interchanges, proximity to the airport, and existing transportation infrastructure.”

Not only that, Bauman said, but the development could benefit from being only about 2 miles away from Allegiant Stadium.

“Good sites that are capable of major development with Strip influence are becoming very rare as more projects are planned and built,” Bauman said. “Prices along the Strip have increased significantly since the Great Recession, causing land south of the Strip to become more and more attractive.”

Oak View Group is not new to the development, management and what it calls “event programming services” for different arenas around the country.

Oak View owns the arenas in New York and Seattle.

“This project represents the next step in that exciting evolution,” Badain said. “This city always bounces back, and it’s time for the newest and best arena to be in Las Vegas. If you’re an entertainment brand, you better have a foot in the door in Las Vegas because it’s an incredible city, and an incredible place to do business.”

I read ‘Gender Queer,’ and so should you

Tutoring can help if we avoid previous missteps