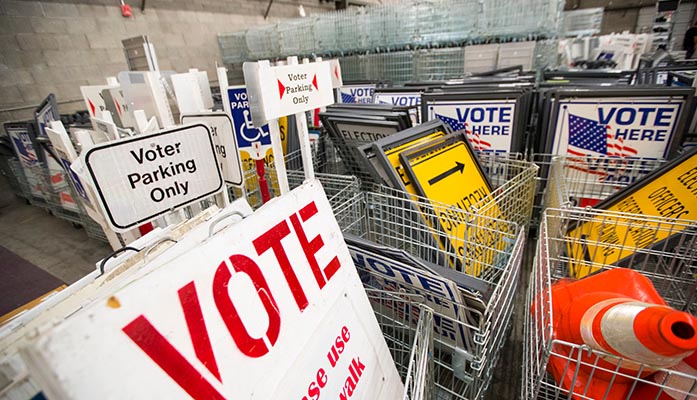 It was pitched as the one election bill that would cure every problem all at once. It was conceived by the not-yet official Patriot Party, the organization headed up by failed 2018 Senate candidate Daniel McCarthy, and introduced by McCarthy’s friend, State Representative John Fillmore. It was the driving force behind large scale demonstrations and social media efforts thanks to a large number of people concerned about flaws in the 2020 elections. It also went nowhere in the Legislature because most lawmakers felt it was poorly written, made promises that could not be kept, and because some lawmakers wanted little or nothing to do with McCarthy’s groups and their hardball tactics.

The bill promised several things that Republican lawmakers agreed with, and things that could make it through the legislative process separately, like Voter ID or smaller precinct sizes. Among the bill’s more grandiose promises were guarantees that every election would be entirely hand counted, no machines would be used for any part of the count, and accurate results of every race would be delivered to the voters within 24 of the polls closing.

Multiple candidates for office, eager to appear more conservative than their incumbent rivals, jumped on the HB2289 bandwagon. Newcomers like Brian Morris, Susan Black and others embraced both the Patriot Party and the bill, as did repeat candidates like Clair Van Steenwyck and Suzanne Sharer. Statewide candidates including Kari Lake and Blake Masters joined the grassroots chorus to pass the bill.

I saw the @DineshDSouza #2000MulesDocumentary last night. It proves at LEAST 2,000 reasons why #HB2289 needs to go to a floor vote! The people of #Arizona deserve to know who stands with them on #ElectionIntegrity!

“If you want to clean up elections then amen brother, let’s do that, and the sooner the better!” said Constantin Querard, an Arizona-based conservative consultant. “But you still have to think through the entire bill before you introduce it, and some of what was promised is impossible to deliver.”  Querard used the promise to deliver accurate results in 24 hours as an example of a policy that sounds great, but is “logistically impossible” to pull off.

“3.4 million ballots cast statewide, with an average of let’s say 70 races per ballot? Fewer in small counties but 60% of that vote is in Maricopa County and we’ve got dozens of judicial retention votes on the ballot alone, so often more than 70 in Maricopa County.  That’s around 240 million votes that they promise to deliver accurate counts on in 24 hours.  So a two-person crew, one Republican and one Democrat, counting even an unrealistically high 1,000 votes per hour, working 12 hours without stopping for water, bathrooms or rest, means you need 20,000 two-person crews, each working 12 hours shifts, just for the first count.  And you need a second count because you have to verify the accuracy of the first count before you can report it.  So you’re talking 80,000 people, 40,000 Republicans and 40,000 Democrats, at the minimum, if every first count matches every second count.  Of course most counts won’t match because people make mistakes, especially if they’re working 12 hour shifts with no rest.  So for every count that doesn’t match, you’ll need at least a third count.  So you need more than 100,000 people working on this effort which far exceeds the volunteer capacity of either party.  That means you’re hiring temporary workers to count ballots, which creates security concerns over which companies and who the temp workers are. And the quality of their work will not be good enough to get a good job done.  So you’ve promised 100% accuracy you can’t deliver in a 24-hour period you have no hope of accomplishing.  The cause is entirely noble, but someone didn’t do the math.  Which is too bad, because you can actually get a lot of what they want done, if you make a few safe adjustments to how they want to do things.”

Querard recommended using machines for speed and accuracy, while running the same ballots through separate machines a second time to verify the count.  Then spot checking batches of ballots with hand counts conducted by human beings.  Since the machines would not be connected to each other, the Internet, or anything else, the count would be protected from the types of hacking that voters are concerned about when machines are involved.  “If someone hacks a single machine, the count doesn’t match on the second machine so you catch it. And if someone hack both machines, then the spot checks by hand catch it and you can fix it.” said Querard, adding “You still have to worry about the ballots themselves and the games people play to collect them, vote them improperly, etc, but at least you’ve fixed the counting process and sped up accurate results that you can verify by hand if you want to.”

Late in the session, John Fillmore held a press conference to put pressure on his fellow lawmakers to sign a pledge that they would not vote for the state’s budget unless HB2289 not only was passed by the Legislature, but signed by the Governor. Not a single legislator showed up to sign the pledge. Even more ominously for the bill’s chances, Fillmore refused to sign his own pledge.

“Fillmore screwed us that day,” said a supporter of the bill who was at the Capitol for the press conference and rally. “He was supposed to be drawing a line in the sand and he completely chickened out.”

It is unclear if HB2289 will be back next year or in what form.  Fillmore’s allies in the Patriot Party are targeting Republicans who did not support the bill in contested primaries, but how effective an anti-Republican group will be in targeting Republicans remains unclear.  Fillmore himself is in a challenging primary matchup with fellow incumbent David Cook and newcomer David Marshall.

It is a certainty however, that election integrity will again dominate the legislative calendar in 2023, as both parties look to prepare themselves for the 2024 Presidential election.