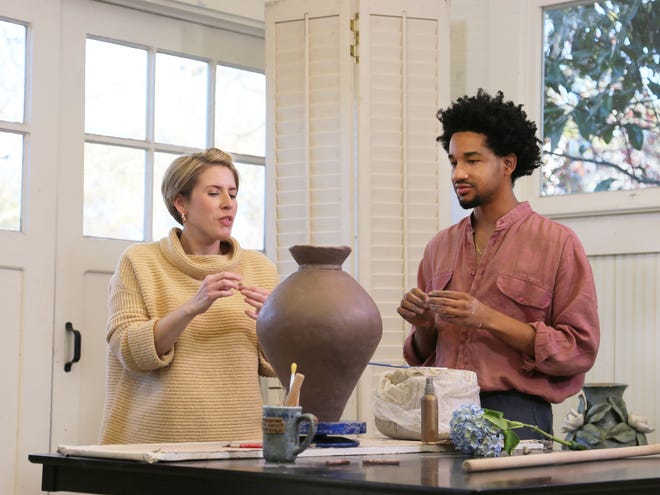 No one can mistake Vixon Sullivan‘s artwork for anything other than Southern.

The Monticello native who now lives in Hattiesburg creates pottery with images of the South, from Mississippi magnolias to Tennessee irises to Virginia dogwood blossoms.

Bowls embedded with bolls or teapots with nesting bluebirds offer a clear sense of place.

Sullivan’s Southern-centric pottery is what led the stars of HGTV’s “Home Town” to feature the 32-year-old on a recent episode.

Erin and Ben Napier of Laurel rose to fame through their keen sense of creative placemaking and storytelling that grew out of a love for their hometown.

In addition to hosting a TV show, the Napiers are partners in Laurel Mercantile Co., a 21st-century version of the store that sold “dry goods and work wares” from 1901 to the 1930s. Sullivan is a featured artist on the Laurel Mercantile website.

In the Season 6 episode “A House for Mom and Dad” that aired April 3, Sullivan talks with Erin Napier about the process. He made a vase decorated with hydrangeas to display for the homeowners.

In the episode, a couple wants to find a home for the wife’s parents and grandmother, who want to be closer to their daughter and grandchildren.

“What I love about this episode is that we focus on multi-generational living under one roof and giving them all what they wanted in a home,” Erin Napier wrote in an Instagram post.

Sullivan wanted to make a vase with magnolias because “I do those pretty well.”

“They persisted. They wanted hydrangeas,” he said. “I appreciated that a little bit because it kinda pushed me out of my shell. It was fun to do something a little bit different.”

Erin Napier also gave the soft-spoken Sullivan advice to get through the show’s taping.

Sullivan and Erin Napier talk about how the vase was made during the shoot and how both of them studied art in college.

Sullivan enjoys collaborating with other artists since he learns and grows from the experience. He’s worked with other Mississippi artists, including his mentor and friend Peter Woods of Peter’s Pottery in Mound Bayou, and sculptor Ben Watts of Columbia.

“When I get an opportunity to collaborate, it’s always good,” he said. “It’s kinda like the marrying of what I like to do and integrating it into somebody else’s home.”

One of Sullivan’s favorite collaborations with Watts was a sculpture of slain civil rights leader Vernon Dahmer, which was installed in 2019 outside Forrest County Courthouse.

Sullivan got a lot of response from the show after it aired, which is good for business, but he wants to find a good balance between work and play so he can enjoy the experience.

He wants people to see him as someone who is encouraging, empowering and inspiring to others but he also wants those qualities to be reflected in his work.

“One thing I really appreciate about being on ‘Home Town’ is it kind of aligns with my message as well — it’s like appreciating where you are from and the beauty in that,” Sullivan said.

15 killed by active shooter in Uvalde

Hattiesburg will honor those who died for their country